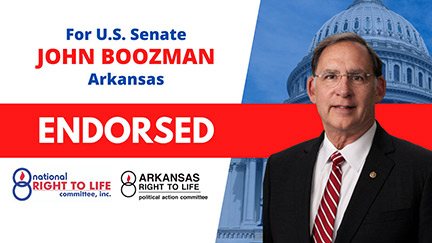 National Right to Life, along with Arkansas Right to Life Political Action Committee, have announced their joint endorsement of Senator John Boozman (R-AR) for re-election.

“National Right to Life is pleased to endorse Senator John Boozman for re-election,” said Carol Tobias, president of National Right to Life. “Senator John Boozman maintained a pro-life voting record during his time in the U.S. Senate and previously when he served in the U.S. House. At a time when the Biden Administration and Congressional Democrats are threatening to expand abortion-on-demand and use tax dollars to pay for it, we need Senator Boozman in the Senate because he is a champion for unborn babies and their mothers.”

“Arkansas Right to Life PAC is grateful for Senator Boozman’s strong pro-life leadership and is proud to endorse him for re-election,” said Rose Mimms, executive director of Arkansas Right to Life. “Throughout his career, Senator Boozman has proven himself to be an unwavering ally for the most vulnerable members of our society. We encourage Arkansans across our state to return him to the Senate to advocate for policies that respect human life from conception to natural death.”

Senator Boozman co-sponsored and voted for the Pain-Capable Unborn Child Protection Act. This legislation would protect unborn children at 20 weeks, a point by which the unborn child is capable of experiencing great pain when being killed by dismemberment or other late abortion methods.

Senator Boozman co-sponsored and voted for the Born-Alive Abortion Survivors Protection Act. This Act would require that a baby born alive during an abortion be afforded the same degree of care that would apply to any other child delivered at the same gestational age.

Senator Boozman voted numerous times against using tax dollars to pay for abortion, and he opposes taxpayer funding of abortion providers. He supports the longstanding Hyde Amendment, which prohibits federal funds from being used to pay for abortions.

Senator Boozman voted to confirm federal judges to the bench who pledge to interpret the Constitution as it was written, including U.S. Supreme Court Justices Neil Gorsuch, Brett Kavanaugh, and Amy Coney Barrett.

“Senator Boozman has worked to see that all innocent human life is protected and he is committed to strengthening a culture of life throughout the nation and in the U.S. Senate,” said Tobias. “We look forward to continuing our important work with Senator Boozman to protect the most vulnerable members of the human family.”