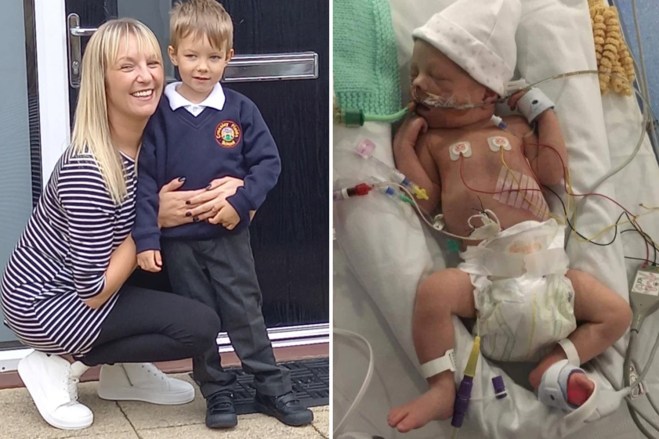 The first day of school is an important milestone for every child, but for 4-year-old Davey Bates and his parents, the occasion is especially meaningful.

Before he was born, Davey was diagnosed with a rare congenital disorder and doctors gave him a slim chance of survival, according to The Sun.

Worse, they strongly advised his parents, Sami and Paul Bates of Mirfield, in Yorkshire, England, to abort him — not just once but five times.

But the Bateses prayed for a miracle, and today their son is healthy and thriving. He recently began his first day of school with thousands of other children across England.

When the Bates family became pregnant with their third child in 2016, Sami said they thought of it as a “happy accident.”

She said they were not planning to have more children because she had undergone surgery three years earlier to remove pre-cancerous cells from her cervix. The results of surgery caused complications while she was pregnant with Davey, and she was told to be on bed rest, according to the report.

“I did my best, but with two toddlers to look after, it wasn’t easy,” she said.

The worst news was still ahead, however.

During her 20-week ultrasound appointment, Sami said the doctor discovered serious problems with her son’s organs. Eight weeks later, he was diagnosed with congenital diaphragmatic hernia (CDH), or a hole in his diaphragm that can cause the intestines and stomach to migrate to the chest and restrict lung development, the Daily Mail reports.

Sami said the doctors gave Davey a 15-percent chance of survival and “strongly advised” her to have an abortion – a recommendation that they repeated four times, according to the report. Each time, however, she and her husband refused.

“It was as severe as a case of CDH as the doctors had ever seen – and with just one in 10,000 babies born with this horrific condition, it felt so unfair,” she said. “It just seemed impossible that he could survive outside of my womb, but we couldn’t live with ourselves if we didn’t at least give him a chance.”

The news of their son’s diagnosis broke their hearts, and they prayed for a miracle.

On July 18, 2017, Sami was induced and Davey was born weighing almost 6 pounds, the report states. A short time later, he was rushed to surgery to reposition his organs.

“It was 50-50 if he’d make it, Paul and I held his tiny hands and said our last goodbyes, saying we would never forget him,” his mother remembered. “He had that massive operation that evening, and our prayers were answered – it had gone as well as could be expected.”

Days later, another miracle happened. When Sami got up early one morning to see Davey, she said she saw three surgeons around his bed, staring at him in disbelief.

“One of them turned to me and said: ‘We don’t know how he did it, but your little boy is a rock star!’” she said.

After just 20 days in the hospital, Davey was deemed well enough to go home. Since then, his health has continued to improve. His mother said he had a second surgery at age 2, but otherwise he is doing well.

This month, he began school for the first time – a significant moment for his whole family.