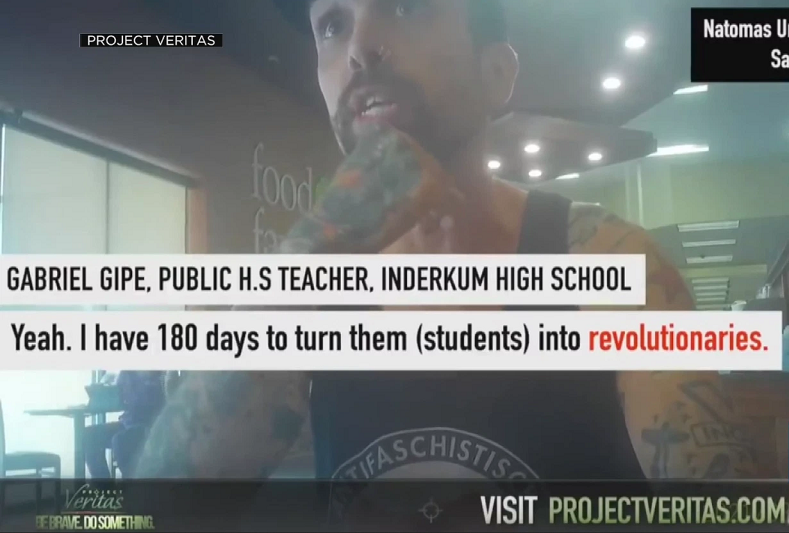 The California high school teacher caught on camera boasting about having “180 days to turn them [his students] into revolutionaries” will be fired by the school district, the Natomas Unified School District said in a letter Wednesday.

The Natomas Unified School District said in a letter that it spent two days investigating Gipe’s actions and his classroom environment. As of Wednesday, the district put Gipe on paid leave, but the district said it would next place him on unpaid leave before firing him.

“In this video, a teacher at Inderkum High School was recorded sharing his educational approach that is disturbing and undermines the public’s trust,” the Natomas Unified School District’s letter said. “By taking a day and a half to investigate beyond the video, the district was able to learn more facts essential to the next steps.”

The Natomas Unified School District learned that Gipe violated the district’s political action guidelines that outline what staff can and cannot do while teaching. Gipe received and opened copies of these guidelines in 2018 as well as September 2020, according to the letter.

“For example, in addition to inappropriate statements from the video, the teacher posted a sign supporting a personal decision for at least local political issue, and possibly more,” the letter said.

Gipe’s classroom was cleared of all posters and signage on Wednesday morning, according to the letter. On his walls, he hung an Antifa flag, a pride flag, a Mao Zedong poster, a flag of North Korea’s ruling party, and a Planned Parenthood flyer, according to photos.

The Natomas Unified School District said Gipe purchased stamps with his own money that included “an inappropriate image of Josef Stalin with an insensitive phrase, as well as other stamps with Fidel Castro, Kim Jung Un and others.”

The district’s investigation confirmed “that at least during the 13 days of this school year, he was using those stamps to mark student work as complete.”

The district also confirmed that Gipe encouraged students to attend events for extra credit, which is not out of the ordinary, but the district stated that some of the events shared by Gipe included activities that were occasionally unsafe. “The lack of involvement of parents in that kind of sharing was both unprofessional and irresponsible.”

Some current and former students expressed support for Gipe on social media, but the district said it also listened to students who shared discomfort about their teacher’s views or actions. The district apologized to those students who felt uncomfortable in Gipe’s classroom throughout the past three years.

“Some students have shared that the teacher has stated he believes students will move to the left as a result of his class,” the letter said. “That is unacceptable.”

The district said history and social studies teachers must teach content that can be controversial, but that the district policy makes clear that “instruction shall be presented in a balanced manner that does not promote any particular viewpoint.”

Teachers should present content without bias or favor toward their personal beliefs and share facts in consideration of differing perspectives, the letter said. “This teacher crossed that line and violated that trust.”

LifeNews Note: Kendell Tietz writes for Daily Caller. Content created by The Daily Caller News Foundation is available without charge to any eligible news publisher that can provide a large audience.