If you’re looking for actual news on any of the three major cable “news” networks these days, you might be looking in the wrong place. According to a new study by the Media Research Center, less than one-fourth (22.3%) of what is aired on cable news could be classified as old-fashioned hard news — just-the-facts reporting or live as-it-happens coverage of an unfolding event. Instead, nearly 80 percent of what’s on cable news these days consists of talk-show discussion and opinionated commentary by the anchors.

Our analysis also shows that cable news has abandoned a varied news agenda in favor of repetitive discussions of U.S. politics. “Politics” now accounts for more than 60 percent of cable news airtime, while other aspects of U.S. life (crime, health, business, sports, weather, etc.) have been pushed to the margins.

For this report, Media Research Center analysts reviewed a sample of 108 hours of CNN, MSNBC and Fox News Channel programming from February 1 through June 30. The sample consisted of two randomly selected hours of weekday programming from each network for each hour beginning at 6am ET and ending at midnight ET. (More details below.)

Our analysts classified each segment by both type and topic. “Hard news” consisted of reports from a correspondent in the field (11.4%), live coverage of a breaking news event (9.3%), and short news items read by the host or anchor (1.6%). Add it all up, and that’s just 22.3 percent of all cable news airtime (after commercials and teases are excluded). 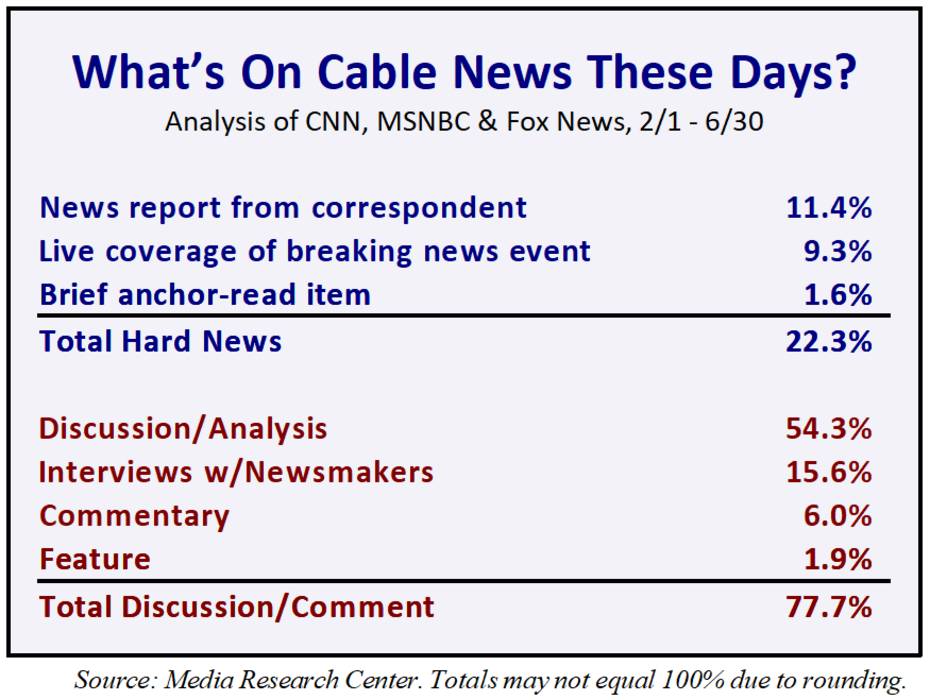 Put another way, the average hour of cable offers viewers just nine minutes, 15 seconds of hard news, compared to an average of about 18 minutes of commercials. That’s not a lot of hard news for networks that put the word “news” in their name.

Instead of hard news, the largest portion of cable “news” airtime (54.3%) consisted of discussion and analysis among the hosts and/or with a gaggle of pundits: correspondents, contributors or commentators. And that total doesn’t include the 15.6 percent of coverage devoted to interviews with direct participants in news events (such as U.S. government officials, eyewitnesses, etc.). Add it up, and nearly 70 percent of cable news airtime consists of hosts talking with guests — a talk show format.

Another six percent of cable coverage consisted of direct commentary by the host, usually highly-opinionated, most of which (83%) was found during primetime. The remainder (1.9%) were soft feature packages, pre-produced and not about the news of the day.

Most of the traditional hard news we found was during daytime programming (between 6am and 7pm), but it was still a small minority of what viewers saw. During the day, 73.1 percent of airtime was devoted to discussion and commentary, vs. 26.9 percent for hard news. In primetime (between 7pm and midnight), the amount of hard news was almost nonexistent, dropping to a mere 9.3 percent, with more than 90 percent of airtime devoted to guests and commentary.

U.S. politics was at the top of all three networks’ agendas. On MSNBC, 66.1 percent of their programming focused on politics, compared with 62.0 percent on Fox News and 52.2 percent on CNN. This fixation on politics crowded out other topics. Crime — including the much publicized trial of former Minneapolis police officer Derek Chauvin — amounted to 15 percent of airtime; health news, including COVID-19, garnered just 7.4 percent of cable news airtime. (Note: a discussion of the Biden administration’s handling of COVID-19 would be considered a “political” segment, while a segment talking to doctors about the pandemic would be considered a “health” segment.)

Other former mainstays of traditional news are now almost entirely absent from cable’s airwaves: Foreign news accounted for just 3.7 percent of the coverage; accidents a scant 2.4 percent of airtime; economy and business stories just 1.7 percent; sports and weather just 1.3 percent and 0.6 percent, respectively. Religion garnered just 0.14 percent of all airtime in our sample — a grand total of two segments, both on Fox News.

Eight years ago, the Pew Research Center studied cable news and found that “factual reporting” amounted to a bare majority of CNN’s content (54%), vs. 45 percent of Fox News and a scant 15 percent of MSNBC’s programming, with the rest consisting of “commentary and opinion.” Now, it seems, the other networks have caught up to MSNBC in jettisoning their hard news mission in favor of inundating their audiences with endless political chattering.

Back in 2019, CNN’s media reporter Brian Stelter tried to defend this trend as something that was needed in the age of Trump: “These days, cable news is primarily a 24/7 talk show about politics and other stories. I say politics first, because you know, especially in the past three years, all things Trump has been the focus….Cable news has had to evolve….There’s less of a need for headlines, and more of a need for talk about the news, analysis of the news.”

Now in 2021, in the age of Joe Biden, what used to be “cable news” is still a “24/7 talk show about politics and other stories.” The question is, does anyone really “need” more talk about the news?

Detailed Methodology: For this study, MRC analysts randomly selected two examples of each hour of programming from 6am ET through midnight ET on each of the three main cable networks (CNN, MSNBC and the Fox News Channel) between February 1 through June 30. Thus, we looked at two examples of CNN’s 6am hour, two examples of CNN’s 7am hour, etc. The hours we examined were chosen independently for each network. The 6am hours of CNN, for example, were from March 1 and June 24; those from MSNBC were from February 23 and March 25; and those from Fox News were from May 5 and May 12. When sampling was complete, our analysts had the equivalent of two full days of coverage for each cable network; weekends and holidays were excluded.

This sampling method ensured our study would not be influenced by the news events of any given day, but would broadly represent cable content over a five-month period. Analysts then reviewed each selected hour, noting the time when each segment began and ended, the length of each segment, and classified each segment by type (news, live event, discussion, interview, commentary, etc.) and topic (politics, health, foreign news, crime, etc.). Teases for upcoming topics and commercials were not included in any of the totals. The results were then sorted to determine the total airtime and percentage of airtime devoted to each type of coverage.