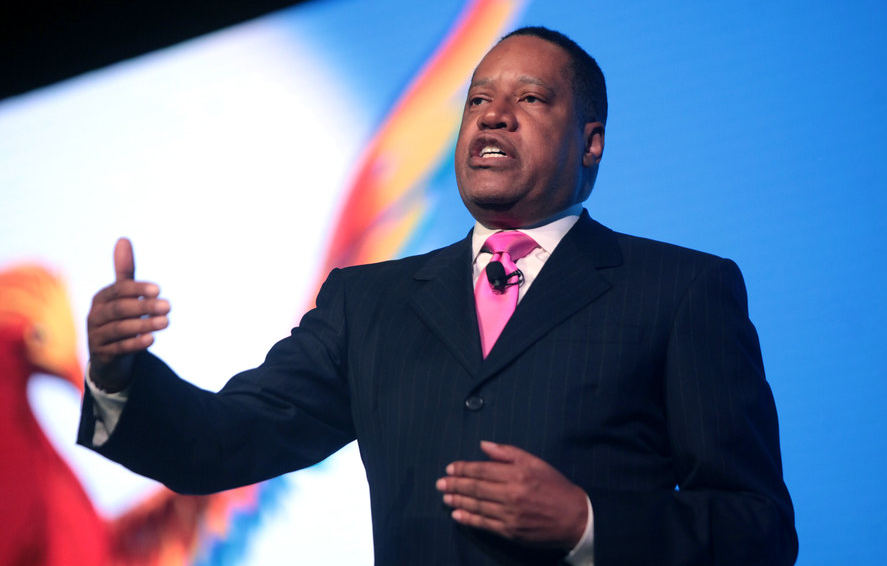 On Friday, The Los Angeles Times published a racist column by Erika D. Smith about California gubernatorial candidate Larry Elder. The current governor, Gavin Newsom, is facing a recall election which will take place on September 14. “Larry Elder is the Black face of white supremacy. You’ve been warned,” her column’s headline screamed.

In today’s LA Times.
You’ve got to be real scared and desperate to play the race card against the brother from South Central. pic.twitter.com/pqZIujKxPD

Smith’s column was an over 1,500 word screed about Elder and how his conservative views supposedly are on the level of “white supremacy” when it could to how bad they would be for Black Californians.

The biggest takeaway, other than how racist Smith is towards a fellow Black person, is that Elder is less Black than Smith and her ilk because of his views. Smith even references her own father to signal as much.

In today’s LA Times.
You’ve got to be real scared and desperate to play the race card against the brother from South Central. pic.twitter.com/pqZIujKxPD

“Like a lot of Black people, though, I’ve learned that it’s often best just to ignore people like Elder. People who are — as my dad used to say — “skinfolk” but not necessarily kinfolk,” she writes. Yet here she is, writing such a column about him and claiming she sought comment from him several times, though he did not respond.

Smith goes on to write:

That’s certainly how many of L.A.’s Black and politically powerful have tried to deal with him over the years. As The Times once wrote of Rep. Maxine Waters’ refusal to be a guest on Elder’s radio talk show: “Why should she boost the ratings of a man who ridicules her by mixing a recording of a barking dog over her sound bites?”

But with polls showing that nearly half of likely voters support recalling Newsom and that Elder is in the lead to replace him, ignoring the self-proclaimed Sage from South-Central is no longer a viable strategy. Particularly for Black people.

One of those people quoted in Smith’s column is Melina Abdullah, the co-founder of Black Lives Matter Los Angeles, who is quoted in the very next paragraph as the one quoted above. “He is a danger, a clear and present danger,” Abdullah warned.

She’s quoted later in Smith’s piece as well, with Smith then adding her own two cents about the supposed danger Elder presents:

Black people know better than anyone how dangerous Elder is. He is the O.G. troll that no one was supposed to feed. But here we are.

But, as Kamlager said, “I’m not interested in going back to Jim Crow because I want to have a Black person as governor.”

Blacks who would dare to agree with Elder get a paltry, one sentence mention. “Some Black people do agree with him. We aren’t a monolith, so it’s true, he does have fans who are Black and are likely to vote for him,” Smith writes.

In a Google News search, the column’s headline appears as “Recall candidate Larry Elder is a threat to Black Californians.” This is also the article’s URL.

As of Sunday night, though, the headline about “Black face” is still there on the outlet’s web page and has been since Friday.

The LA Times is about to buy Larry Elder a yacht. pic.twitter.com/lFfpza2lD7

A columnist for the LA Times said “Larry Elder is the black face of white supremacy”.

What also appears on the screen is an invitation to sign up to “Get the latest from Erika D. Smith.” The invitation has that buzz word, as it says those who sign up will get “Commentary on people, politics, and the quest for a more equitable California.”

Elder addressed the column during his appearance on “Hannity” that same night, revealing “I anticipated that would happen.” He also pointed to how The Los Angeles Times has also called him a Black David Duke.

Hannity: Larry Elder Responds To ‘Evil, Racist’ Article About His Run For Governorhttps://t.co/aOWFEYRVOr#RecallGavinNewsom#WeveGotAStateToSave

He suggested that his critics “are scared to death. They know if California can elect a conservative governor like myself, and they can and they will come on September the 14th, that any state can’t come and they’re deathly afraid of this.”

When it comes to who would replace Newsom, should he be recalled, Elder leads the way in polling. As blue a state as California may be, which Smith went through great lengths to remind readers in her column, recent polls may very well have Newsom worried.