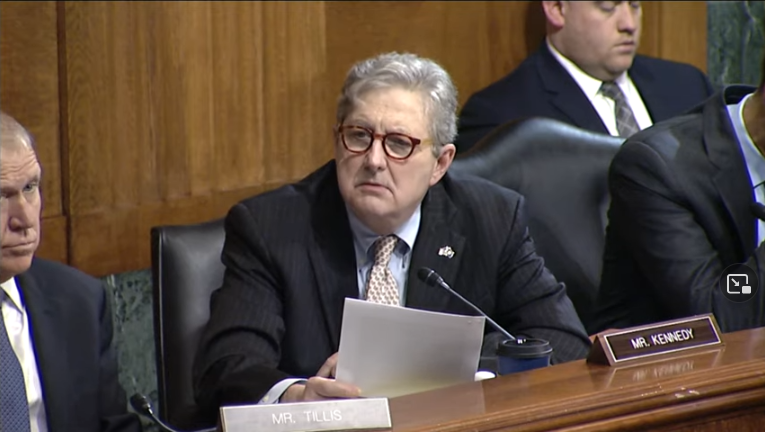 Republican Louisiana Sen. John Kennedy flustered President Joe Biden’s nominee to a senior position in the Department of Justice (DOJ) by quizzing him on an old tweet during a Wednesday confirmation hearing.

Biden nominated Hampton Dellinger, a former partner at Boies Schiller, to be the head of the DOJ’s Office of Legal Policy on June 18. During his confirmation hearing, Kennedy pressed Dellinger on a 2019 tweet in which he claimed that “if there were no Republican men in elected office, there would be no abortion bans.”

“You wrote it. Here it is, bigger than Dallas,” Kennedy said as he held up a photocopy. “Do you think that my votes with respect to abortion are based on the fact that I want to control women?”

“Senator, I can not speak to that,” Dellinger responded.

“Well, why’d you say it, in front of God and country?” Kennedy shot back.

“Senator, I sincerely appreciate people that have a different position on abortion …” Dellinger started.

“You sure don’t tweet it. Have you ever tweeted that?” Kennedy interrupted.

“Yeah, you’re up to be nominated. You want me to vote for you,” Kennedy said.

Dellinger is not the first Biden nominee to run into trouble over social media use. Neera Tanden, who was nominated to direct the Office of Management and Budget, withdrew from the process after tweets insulting Republican Alaska Sen. Lisa Murkowski surfaced. A Hillary Clinton ally, she also feuded with Independent Vermont Sen. Bernie Sanders during his 2016 presidential campaign.

Colin Kahl was confirmed to be the Department of Defense’s Undersecretary for Policy despite social media comments blasting Republicans, which Republican Arkansas Sen. Tom Cotton described as “intemperate and unbalanced.”