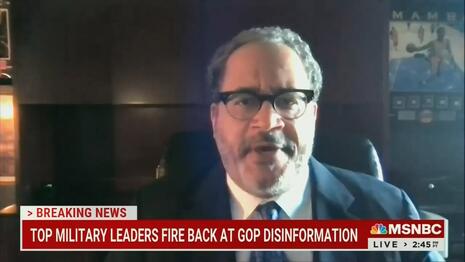 Appearing as a guest on Wednesday’s Deadline: White House on MSNBC, Georgetown University professor and former MSNBC analyst Michael Eric Dyson went into a rant against “mediocre white men” as he reacted to a clip of Congressman Matt Gaetz (R-FL) raising concerns about the influence of Critical Race Theory in the U.S. military during a recent committee hearing.

I agree with brother Tim in speaking about, you know, the maggots — I’m sorry, the MAGA — that is so corrosive in this, you know, political moment. And can I tell you, Nicolle, that, as a black person, as a black intellectual, as a black person with a PhD from Princeton University who’s taught at several Ivy League schools, isn’t it interesting before black and brown and minoritized and racialized groups could get in — before women could get in, those were the gold standards —  Harvard, Yale, Princeton, Vanderbilt, University of North Carolina, and on and on.

Without naming any names as to whom he was complaining about, Dyson asserted that he has been criticized whether he was educated or not:

After acknowledging that academics can get too based in jargon to make sense to the average American, saying Jesse Jackson explained that to him, he took aim at what he called “mediocre mealy-mouthed snowflake white men.”

But I resent as an intellectual and as a black person in America that we have taken the brunt of anti-intellectualism. We have borne the brunt of being disloyal to this nation. And we have stood by to see mediocre mealy-mouthed snowflake white men who are incapable of taking critique, who are willing to dole out infamous repudiations of the humanity of the other and yet they call us snowflakes and they are the biggest flakes of snow to hit the Earth. They are incapable of criticism. They are incapable of tolerating difference. They’re scared of, “Oh, my God, critical race theory is going to kill your mother.”

Speaking of white men who can’t handle a critique, maybe Dyson should have taken on Chris Rufo on Joy Reid’s show. This rant went on and on. He continued:

And they don’t even know — they are not critical — they have no race, and they don’t understand theory. And yet they are allowed to wax eloquently about the means and limits of rationality in this country, and they couldn’t save themselves if the world depended on it. And I am tired of hearing mediocre white men take to their pulpits to excoriate women and trans people and bisexuals and black folk and every other thing that ain’t them.

This latest example of incendiary rhetoric on MSNBC is sponsored in part by VMWare. Click on the link to let them know what you think.