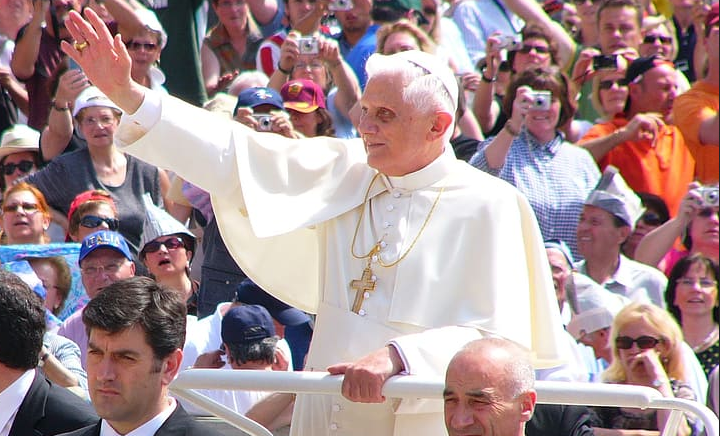 Former Pope Benedict XVI warned in a 2004 memo that high profile politicians who persist in their public support for abortion should be denied Communion.

Benedict wrote the memo when he was known as Cardinal Joseph Ratzinger and when former presidential candidate John Kerry, a pro-abortion Catholic, was running for president. Ratzinger warned that “not all moral issues have the same moral weight as abortion and euthanasia” and said that though Catholics may have diversity of opinion on some topics, there is no “legitimate diversity of opinion” when it comes to abortion and euthanasia.

Ratzinger’s comments are particularly relevant now as Catholic bishops discuss denying President Joe Biden communion for his public support for abortion. Pope Francis has notably not commented on whether Biden should be denied communion, but the pope has repeatedly condemned abortion as evil and the killing of innocent life.

“The minister of Holy Communion may find himself in the situation where he must refuse to distribute Holy Communion to someone, such as in cases of a declared excommunication, a declared interdict, or an obstinate persistence in manifest grave sin,” Ratzinger wrote.

“Regarding the grave sin of abortion or euthanasia, when a person’s formal cooperation becomes manifest (understood, in the case of a Catholic politician, as his consistently campaigning and voting for permissive abortion and euthanasia laws), his Pastor should meet with him, instructing him about the Church’s teaching, informing him that he is not to present himself for Holy Communion until he brings to an end the objective situation of sin, and warning him that he will otherwise be denied the Eucharist,” the former cardinal continued.

If the “person in question” obstinately persists in presenting himself to receive communion even after all this, Ratzinger wrote, the minister “must refuse to distribute it.”

“This decision, properly speaking, is not a sanction or a penalty,” the former cardinal and pope said. “Nor is the minister of Holy Communion passing judgment on the person’s subjective guilt, but rather is reacting to the person’s public unworthiness to receive Holy Communion due to an objective situation of sin.”

The memo was sent “in the form of a private letter to the bishops” and was not intended for publication, Cardinal Luis Ladaria said earlier this year.

Benedict sent the 2004 memo on the Eucharist to former Bishop Wilton Gregory and disgraced Cardinal Theodore McCarrick, who was declared guilty of “solicitation in the Sacrament of Confession, and sins against the Sixth Commandment with minors and with adults, with the aggravating factor of the abuse of power,” by the Congregation for the Doctrine of the Faith in February 2019. McCarrick was also defrocked.

McCarrick downplayed the letter to U.S. bishops in July 2004, according to The Washington Times, paraphrasing the statement to suggest that the Vatican said that it was up to bishops to decide on communion for pro-abortion politicians. He was later accused of deliberately misinterpreting Ratzinger’s words.

“I would emphasize that Cardinal Ratzinger clearly leaves to us as teachers, pastors and leaders WHETHER to pursue this path,” McCarrick said in a speech to bishops, according to the Washington Times. “The question for us is not simply whether denial of Communion is possible, but whether it is pastorally wise and prudent.”

The publication reported that as a result of McCarrick’s speech, the bishops voted 183-6 on a compromise statement that allowed each bishop to decide whether he should give pro-abortion politicians communion.

The full text of Ratzinger’s memo on communion was published in July 2004 in the Italian newspaper, L’Expresso.

Benedict resigned as pope in February 2013, saying he no longer had the strength to continue leading the Catholic Church. The last pope to resign from the papacy was Gregory XII, who left the office in 1415.

The cardinals selected Cardinal Jorge Mario Bergoglio of Buenos Aires to become the next pope, Pope Francis I.