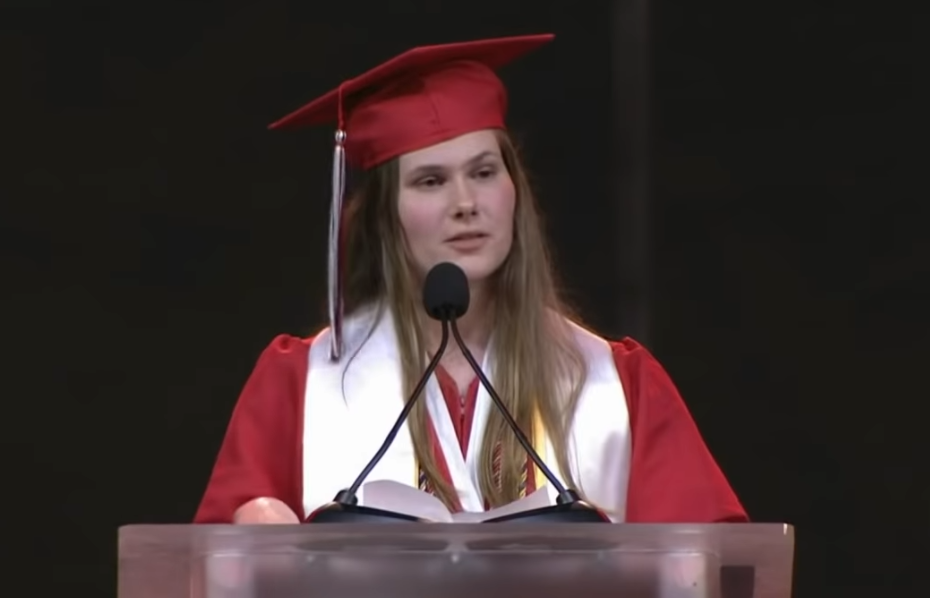 Paxton Smith, the valedictorian of Lake Highlands High School in Dallas, said she switched speeches at the last minute because she felt outraged by the new Texas heartbeat law, which bans abortions after an unborn baby’s heartbeat is detectable.

“I was really shocked that I got to finish my speech,” Smith told NewsNation this week. “And I was very excited by the audience reaction of how positive it was.”

She told CNN that most of the school staff also supported and congratulated her after her speech.

Smith’s original speech, the one approved by school administrators, focused on TV, content and media, UPROXX reports. On Sunday at the commencement ceremony, however, the graduating senior pulled out a different, unapproved speech that she had written several days earlier expressing her outrage at the new heartbeat law.

It appears that she will not be disciplined for giving the unapproved speech either. According to Newsweek, Smith said she had been told that the school was “considering” withholding her diploma, but that did not happen.

She told NewsNation her parents were concerned about the reaction she would get, but she pressed ahead. She said she’s not afraid of having uncomfortable debates.

“This is a conversation we need to be having,” Smith said. “So it can’t be fire and brimstone from one side or the other. It’s important to listen to what the other side has to say. Even if it doesn’t necessarily change your perspective, change your mind or change the way that you look at the situation.”

The Richardson Independent School District, of which Lake Highlands is part, was less enthusiastic. In a statement, it said it would review student speech protocols before next year’s graduation ceremonies.

In the speech, Smith criticized Gov. Greg Abbott for signing the pro-life law and taking away women’s chance “to decide if they are emotionally, physically and financially stable enough to carry out a full-term pregnancy.”

The heartbeat law could save tens of thousands of unborn babies’ lives in Texas every year if it is not blocked by the courts. In 2019, more than 56,600 unborn babies were aborted in the state, according to state health statistics.

Smith, however, claimed the heartbeat law is “dehumanizing” because it supposedly takes away women’s bodily autonomy even though abortions destroy a baby’s body permanently.

Since giving the speech, she has received national news attention and praise from prominent pro-abortion leaders including Hillary Clinton.