So many moms facing unplanned pregnancy seek chemical abortion out of fear; fear of what their family might say or how their partner may react to the pregnancy, or fear that they cannot make it on their own if they choose life for their child.

But like the idea behind the Christian rock song, “Fear is a Liar,” and LaToya would experience the lies of fear first-hand and see each lie torn down in time.

Her relationship with a man who did not reveal he was married was built on lies. After discovering his deception and then that she was carrying his child, fear returned with more lies.

“He didn’t care either way what I did,” LaToya recalled, “whether I kept the baby or not. I dropped it on him I was going to get an abortion. He offered to be there to ‘help’ me.”

LaToya went to Planned Parenthood and was given the abortion pill with instructions to take a second pill within 48 hours.

The first drug in a chemical abortion, mifepristone, destabilizes a mom’s pregnancy. The second drug, misoprostol, typically taken a day or so later, causes her to go into labor and deliver her deceased child. Both chemical abortion drugs have cramping, and other side negative effects associated with them.

“When I got home, I sat there and I thought, if this is making me feel this bad, how was it making the baby feel?” LaToya wondered. “So, I looked online to see what would happen if I didn’t take the second set of abortion pills.”

“When I did that, a website popped up in the search called APR abortion pill reversal,” she said. “I had never heard anything about that. I never knew that you could reverse the effects of the abortion pill.”

The Abortion Pill Rescue® Network (APRN) is available 24 hours a day as LaToya had discovered.

Abortion pill reversal (APR) is a newer application of a decades-old treatment to prevent miscarriage. Progesterone is administered with the protocol to counter the first abortion drug. If a mom takes the abortion pill, experiences regret and acts quickly enough it may be possible to save her unborn child.

The APRN is a network of some 1,000 rescue providers and pregnancy help centers that administer APR. Statistics show that to date, more than 2,000 lives have been saved thanks to the APRN.

“So, I called, and I explained the situation,” LaToya stated. “I took my first set of pills at like, 10 that morning. And I called them about 11, a little after 11, I spoke on-line. They said that they we’re going to get in touch with a doctor in my area. So, they did that.”

She was connected with an APRN provider who is a family physician.

“He called me back and he prescribed me progesterone to offset the effects of the first abortion pill,” said LaToya. “He called that into the pharmacy.”

Since LaToya was afraid to tell her family that she was pregnant, she went to the baby’s father’s house for the promised ‘help.’

“I was at his house the day after I took the first pill (and after having started the progesterone to counter it). I was in pain with cramping,” LaToya said, recalling her fears.

“We ended up getting in a fight,” she said.

It became clear he would not be someone she could rely on to get through this.

That day would end their relationship and LaToya would go forward alone. She wouldn’t tell her 18-year-old son or 14-year-old daughter about the pregnancy until she was four months along.

“I thought the pain meant the progesterone wasn’t working,” she continued. “I was concerned because I had a Doppler. I would listen to the baby’s heartbeat and I heard her heartbeat pretty early on, but that whole weekend (LaToya had visited Planned Parenthood on Friday) I couldn’t find her heartbeat.”

Her doctor followed up with her and sent her a referral for an emergency ultrasound at a group of local pregnancy help organizations (PHOs).

The first ultrasound clarified that the progesterone was working, and LaToya’s daughter was doing well. A week later the PHO provided another ultrasound showing the same results.

Between the two ultrasounds LaToya was revisited by fear.

“I was confident my body was not going to reject the baby,” she said. “But could she stay viable, how much damage did the pill have? I was worried something could be wrong with her.”

LaToya had remembered the instructions given her at Planned Parenthood.

“They told me I had to take the second pill no more than 48 hours later,” she recalled. “I would need to take a pregnancy test in three or four weeks to see if it was out of my system. They wouldn’t charge for a suction abortion if I had to go back.”

Planned Parenthood called her four weeks later to see what the results of her pregnancy test were.

“A week later I got a phone call from them again and I just didn’t answer,” said LaToya. “I received a letter in the mail from them saying I needed to contact them to do a follow up. But I just threw that in the trash.”

She said the pregnancy help organization and the staff there were amazing, continually following up with her.

“They checked in on me all the time and I just loved it,” said LaToya. “I love when I saw those text messages come through asking how the baby was doing, she was doing great.”

LaToya would wait until she was six months along to tell her own father.

“He thought there’d be something wrong with the baby,” she recalled. “My dad and sisters knew, but I didn’t let the rest of the family know ‘til after.”

“She was six pounds, 15 ounces. And I had her in November 2020,” LaToya said of her baby daughter. “They (the PHO) set up a baby shower for me. I came in for the baby shower and it was so helpful. During my pregnancy I worked so much I didn’t have time to shop.”

Even her other kids’ fears were eliminated.

“My son and daughter, at first they were disappointed, not wanting to share room, put up with noise and so on,” said LaToya. “Now they love her.”

“She brings me so much joy,” she said of her little girl. “It feels different having a baby now (that she’s older) I can appreciate every moment. I don’t feel like I’m ‘missing out’ on other things. I look forward to getting home from work and being with her.”

To any other woman who may encounter an unexpected pregnancy LaToya offers hope.

“I would tell her I was there,” she said. “I was embarrassed, disappointed, let down that I had been tricked, thinking I was going to be a failure.”

LaToya said she doesn’t know what she would have done without abortion pill reversal or the pregnancy help center and their help.

“Because they really were my support system,” she said. “There is hope, there is help. You don’t have to do it alone.” 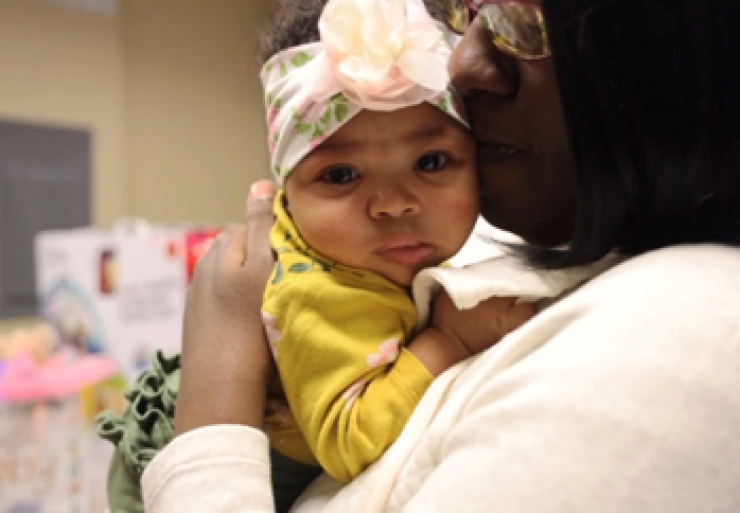