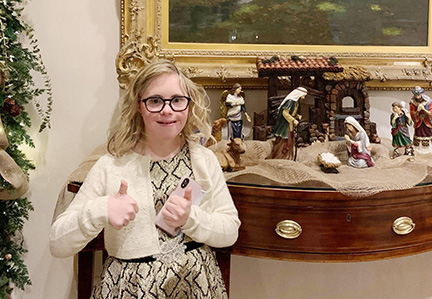 The blonde-haired girl with the engaging smile and can-do attitude was in search of a miracle.

The teenager had an appointment for an MRI and neurosurgery seemed a certainty.

But Chloe Kondrich, a young woman who happens to have an extra chromosome, had faced adversity before and triumphed.

Recently Chloe’s doctor reported that she had miraculously healed and that surgery would no longer be necessary.

The medical turn-around was just the latest victory for Chloe, who has become something of an international ambassador for people with Down syndrome. She has traveled widely, spoke at the United Nations twice, and had her photo displayed on the giant screen in Times Square five times.

Yet, she and her family live with the daily reality that children such as Chloe are truly endangered. The reason why is the extraordinarily high rate of abortion of preborn babies diagnosed with Down syndrome in the womb. Research indicates the vast majority of such children are aborted.

Chloe’s father Kurt believes that many people simply do not realize the capabilities of children with Down syndrome. They also may lack knowledge about the resources that are available to young people with special needs.

To address this critical issue, the Kondrich’s were influential in passing Chloe’s Law, a Pennsylvania statute which offers positive information and support to families who receive a prenatal diagnosis of Down syndrome.

The family is now advocating for legislation in PA which would ban abortion for the sole reason of a Down syndrome diagnosis. They know that every child with Down syndrome deserves a chance at life—an opportunity to dance and dream and dare to push past boundaries and defy expectations. The kind of life Chloe lives every day.