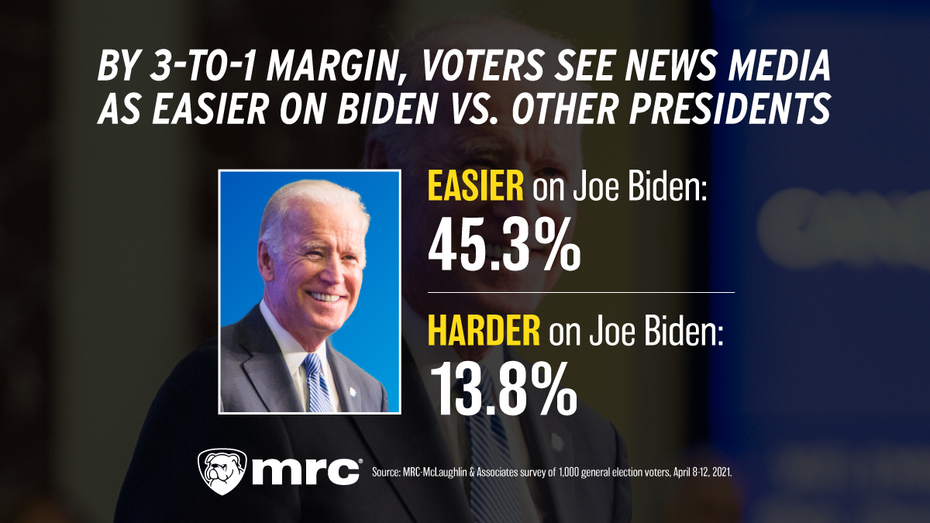 As Joe Biden nears his 100th day in office, a new poll conducted for the Media Research Center by McLaughlin & Associates finds a plurality of voters say the news media have given the President an easier ride than his predecessors.

The public’s perception of a pro-Biden bias is confirmed by a recent MRC study which found broadcast evening news coverage of the new President has been more positive than negative (59% positive vs. 41% negative). By contrast, our analysis of the same time period in 2017 found 89% negative coverage of President Trump, vs. just 11% positive.

The poll of 1,000 people who voted in last fall’s general election was conducted from April 8 to April 12. When asked if they thought the news media has been easier or harder on Joe Biden, or if Biden has been treated about the same as other Presidents, voters by a more than three-to-one margin saw the media as going easy on Biden.

Similarly, Democrats were divided on whether the media have been easier or harder on Biden (19.2% vs. 23.9%), but both Republicans and independents strongly favored the view that the media have gone easier on Biden compared to his predecessors.

For details and more results from this poll, visit McLaughlineOnline.com.