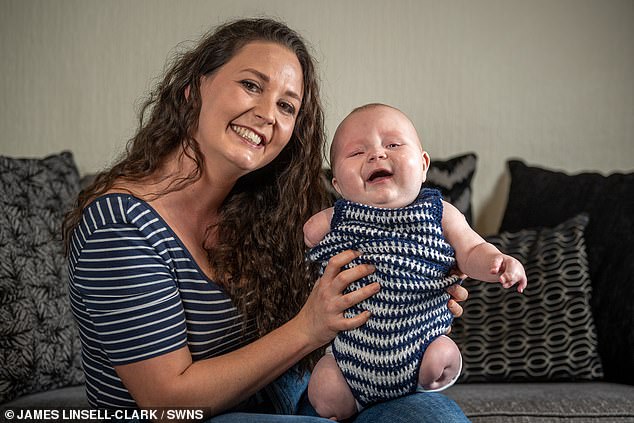 Rosie Higgs had “no doubt” in her mind what she would do when doctors told her that her unborn son may be born without limbs.

In such situations, parents frequently are presented with the “option” of abortion – or even pressured into it by doctors, genetic counselors or family members.

But Higgs, of Harrow, London, England, said she refused to consider the possibility, and it was the best decision she ever made, The Daily Mail reports.

“When I was told my baby would only have one arm and no legs, I was so worried and upset. But there was no doubt in my mind that I was keeping him, no matter what I was advised,” she said.

Her son, Henry, will turn 1 year old in May. Though he only has one arm, his mother said he is a happy, pleasant baby who enjoys life.

The Sun reports Higgs learned about Henry’s disability during her 20-week pregnancy appointment. Doctors told her that he may have amniotic band syndrome, which inhibits the growth of the limbs, and recommended that she return for frequent ultrasound scans, according to the report.

Though she refused to consider an abortion, she said she still worried about Henry often.

“When I was at work it was OK because I didn’t think too much. But when I had to stop work I was really overthinking things,” she said.

Henry was born on May 13, 2020, at Northwick Park Hospital, Harrow; he weighed 8 pounds, 2 ounces, the report states. Since then, his mother said he has been progressing well.

“I know he will always be a little bit different but we take it day by day and I know he’ll be able to cope with any future challenges,” she said.

Little Henry is hitting all the milestones he should be – he’s able to lift objects up, lift his head up and roll over.

Rosie said: “He’s able to pick things up without any problems which is really surprising. He’s progressing really well.

“He’s babbling all the time like he’s talking to you. It’s like he’s replying. He wakes me up in the morning with his babbling.”

Higgs said her family is so grateful for a charity called Reach that helps children who have disabilities involving their limbs. Through the charity, she said they connected with other parents who have encouraged and supported them.

“They’ve been amazing,” she said. “They’ve really helped me get through it. The house is something that we’re going to have to adapt as he gets older because it’s not suitable the way it is at the moment. That is a bit of a worry.”

For now, the family is enjoying each other and celebrating every day together.

“[Henry] is such a happy chap and doesn’t let his disability hold him back in any way,” his mother said. “… He might not have all of his arms and legs, but he’s absolutely perfect to me.”

Like Henry, pro-life advocate Nick Vujicic was born without limbs. He travels across the world, speaking about his Christian faith and the value of every life.