When Gerry Cruz, leader of a pastoral council in Napa, California, invited friend and community pro-life leader Ron Maxson to speak last year, little did he know that 10 months later, he’d help open a pregnancy center next door to the town’s Planned Parenthood.

“The genesis started years ago,” Cruz said. “Our inspiration for the center is Ron Maxson, a strong, ardent warrior for the pro-life movement since Roe vs. Wade.”

Last February he asked Maxson to speak to the pastoral council that Cruz leads.

“He agreed whole-heartedly and came and spoke to us – he was very inspirational,” Cruz said.

An insurance agency was next door to the abortion center at the time, and Maxson had become aware that the company decided to not renew its lease.

“[Ron] said ‘Wouldn’t it be great if we could somehow find a way to purchase or lease that building? I don’t know how I’d actually put it together, but I’ve been praying about it,’” Cruz remembered.

With a background in banking and real estate, Cruz volunteered to help.

“This was a Tuesday, and by Thursday, Ron had put together a meeting of stakeholders,” Cruz said. “So, we met, a group of about six or seven of us, to start laying the foundation to see if we couldn’t make a proposal to acquire this building. We kept very busy during the COVID lockdown putting this together, but we finally agreed to lease terms with the owner, who also happens to be very pro-life … In May, we finalized the lease agreement.”

The building needed a lot of work, he added. The group also completed non-profit paperwork, created a board and steering committee, and by early fall, prepared to open the pregnancy center, known as the Napa Women’s Center. Cruz is president of the board.

The center received a Life Launch Grant from Heartbeat International.

Joanne Andrego, who also serves on the board and sat on the steering committee last year, became familiar with Heartbeat International through speaking with the director of another California pregnancy center.

“After that conversation with her, Heartbeat stood out in my mind, so I started researching [the website] and making phone calls to the organization,” Andrego said. “I realized how much of a blessing that it was … and I reached out. I was very impressed with how authentically caring the staff was when I would call.”

Andrego asked a Heartbeat staff person she spoke with for prayer as the new center prepared to move forward. Not long afterward, she received a call from Sara Littlefield, program specialist for Heartbeat International’s Life Launch Grant program.

“Sara got in contact with me … It’s been an amazing blessing!” Andrego said.

“They were a great center to consider,” Littlefield said. “When you look at the grant program, it’s designed to support start-up organizations in underserved areas and targeted regions. Because there’s a Planned Parenthood right there in town, we considered [their center] in a targeted community.”

Heartbeat’s Life Launch Grant program provides $30,000 in funds and training resources to new pregnancy resource centers. Those organizations are required to raise $30,000 within their community and contacts. 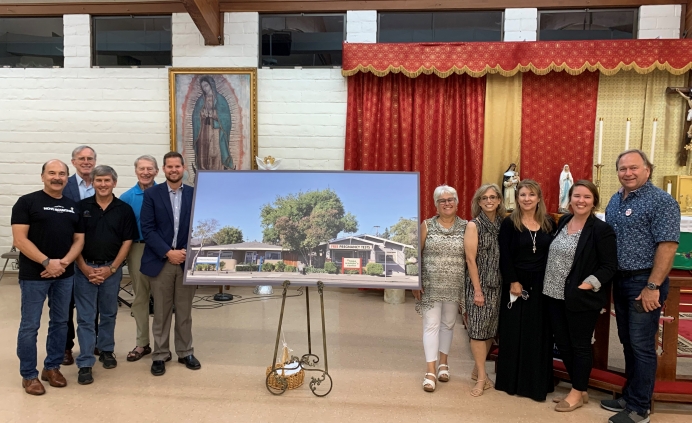 “We had the fortune of not having to start from scratch,” Cruz said.

Maxson had started a pro-life non-profit called Napa Valley Culture of Life, an organization that “connects people in need to different resources in the pro-life movement,” Cruz said. Napa Women’s Center started as a branch of that organization and received funding. Later, after becoming its own non-profit, the entity was able to accept donations, a big benefit.

“It allowed us to get out of the gate fairly quickly and be able to take those donations from people to support our mission,” Cruz said.

Partnering with Heartbeat helped set the center up for greater success.

“The grant was a lifesaver for us,” Andrego said. “I felt like we were walking this alone, trying to find some support. When Sara stepped in, she was, and is, a Godsend. I told her I needed hand-holding, and that’s what she provided, guiding us along.”

“God definitely had a hand in it – we saw that consistently throughout,” Cruz said. “By the end of the year, we were ready to open the doors.”

Opening the doors to true choice

Littlefield attended the center’s soft opening last November; the primary speaker for the event was Shawn Carney, president of 40 Days for Life.

In addition to financial benefits from the Life Launch Grant, Napa Women’s Center received a website design, The LOVE Approach training manual, and other resources.

“Having the Heartbeat resources was just an amazing benefit!” Andrego said. “Because of that, I feel we can serve the women of our community, having that peace of mind that we’re doing things in the proper way, in the spiritual way and in the legal way. We’re just very, very grateful!”

The board hired Julie Murillo as executive editor. She, along with 13 volunteers, answer phones, meet with clients, and set up and stock the Baby Boutique, among other duties. When clients come to Napa Women’s Center, they are provided education on STDs, abstinence, fetal development, and pregnancy options. Bright Course is used to educate the clients, and the free pregnancy tests are self-administered, Murillo said.

Planned Parenthood has been in the Napa community for decades, yet town residents welcomed the new pro-life pregnancy center, she added.

“We’ve been blessed to have so many people stop by and drop off baby clothes,” Murillo said. “We have a lot!”

Napa Women’s Center is open Monday through Friday, 9 a.m. to 5 p.m., paralleling the hours that Planned Parenthood is open. Now area women have true choice when facing an unplanned pregnancy.

“We know we can serve the women in our community, providing the pregnancy tests and the support, to love them away from having an abortion,” Andrego said.