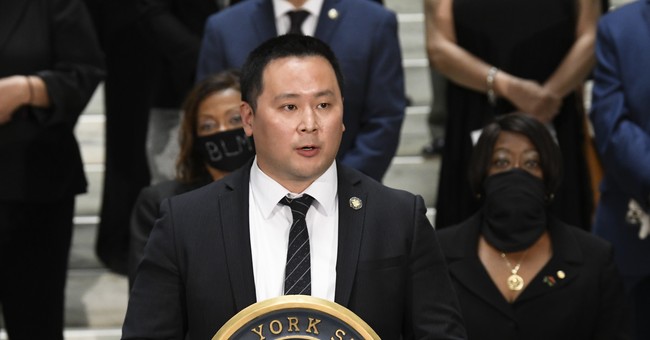 “We support nursing homes,” Peter Arbeeny, who lost his father to COVID in a Brooklyn nursing home, said. “We do not blame the 15,000 lost loved ones on the nursing home staff.”

Arbeeny and his brother Daniel were joined by other folks who have been trying to hold the Cuomo administration accountable at the We Care Memorial Wall on Sunday to mourn loved ones lost in nursing homes.

“I was going to go away very quietly,” Arbeeny said. But then, he explained, the governor didn’t apologize. And then he announced he was releasing a book.

“I said if he comes out with a book, I’m going to put 6,500 pages of that book in a coffin and put it in front of a nursing home,” recalled Arbeeny, symbolizing the initial number of reported nursing home deaths. Only recently did we discover that the number was closer to 15,000. Secretary to the Governor Melissa DeRosa admitted on a phone call with lawmakers that the administration withheld the number because they feared a federal investigation.

“As a COVID orphan, we need answers,” Arbeeny said. “We need an apology, and we need a fair investigation.”

Fox News senior meteorologist Janice Dean and New York assemblyman Ron T. Kim (D) were also among the speakers. Dean lost both of her in-laws in New York nursing homes and Kim lost his uncle. Both have spoken out against Gov. Cuomo’s policies. Kim has also been very candid about how Gov. Andrew Cuomo recently threatened him over the phone.

“When I got that call from Gov. Cuomo, threatening me and my career, my livelihood, to lie for him,” Kim explained on Sunday. “I wasn’t scared of his bully tactics, but I was afraid that he would escape accountability. That is why I pushed back.”

“Who in their right mind can go into a press conference and say, ‘Who cares where they died?’” Kim asked, referencing one of the governor’s recent press conferences.”A coward!” someone in the crowd yelled. Kim immediately agreed.

“I know that his reign of abuse of power will end soon,” Kim predicted.

VoicesForSeniors director Tracey Alvino provided another emotional moment when she stepped up to the mic, telling the crowd how her father passed from COVID in a nursing home and she had to say goodbye over the phone.

“He is one of Gov. Cuomo’s uncounted,” Alvino said. “He may be just a number to Melissa DeRosa that she admitted from a report, but to my family, he was the glue that kept us together.”