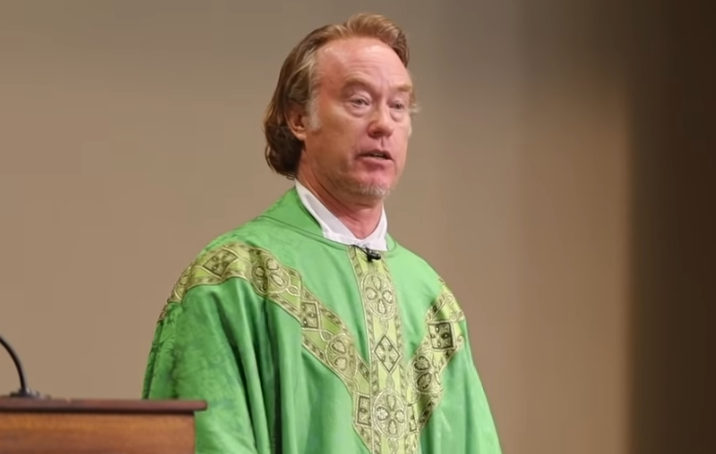 In a deeply emotional message to his congregation, an Arizona priest mourned how President Joe Biden, a supposedly devout Catholic, is working to expand the killing of unborn babies in abortions.

Father William Kosko of St. Henry’s Parish in Buckeye, Arizona, said he would welcome Biden to attend Mass but not to participate in communion unless he repents, The New American reports.

“Over my dead body; not until he repents,” Kosko said. “He’s a public figure. He needs to publicly repent, and we need to pray for his conversion.”

“I’ll probably get my butt kicked, but it’s the right thing to do. Woe to me if I don’t preach the Gospel,” the priest continued, choking back tears. “God help us!”

Videos of Kosko’s homily, including one by CatholicVote, recently went viral online, amassing hundreds of thousands of views.

In his Feb. 7 message, the priest spoke strongly and came close to tears as he lamented the evil that American society has allowed, including the more than 62 million unborn babies who have been killed in abortions.

“I am angry,” Kosko said. “It’s a righteous anger, the same righteous anger that Jesus had when he drove the money-changers out of the temple. He didn’t hate those people, but he was outraged. … Righteous anger means I’m incensed at what you are doing to someone else and I am called to protect.”

Americans “just elected a Catholic president who is diametrically opposed to all of the basic moral principles proclaimed by the Roman Catholic Church; not only abortion and the sanctity of human life, but the sanctity of marriage and this gender silliness,” he continued. “How in the world did that happen?”

Though he admitted to feeling tempted to ask people who are pro-abortion to leave the church, Kosko said he will not because he wants people to repent, know the truth and be saved.

“You are welcome here even if you are pro-abortion, but your ideas are not welcome here,” he said.

Kosko said Catholic leaders are part of the problem because they have stayed “silent for 60 years through bad catechesis and cowardice.”

“This is the Catholic Church, the Holy Catholic Church of God, that teaches” that killing an unborn child is wrong, Kosko said. “What parish would accept your views? Sadly, you would find one, and that is an indictment against the bishops.”

When Kosko concluded his homily and began to walk away, the congregation erupted in applause, but he turned back and told them to stop.

“Don’t applaud. We need to hang our heads in shame. We’ve tolerated this for too long,” he said.

Biden has been called the most pro-abortion president in U.S. history.

His agenda would expand the killing of unborn babies both in the U.S. and abroad. Right now, one of his priority pieces of legislation, the Equality Act, is being considered in Congress. If it passes, doctors and nurses could be forced to abort unborn babies or lose their jobs. Biden also wants to end all restrictions on taxpayer funding for abortions, including the Hyde Amendment, which is credited with saving more than 2.4 million lives.