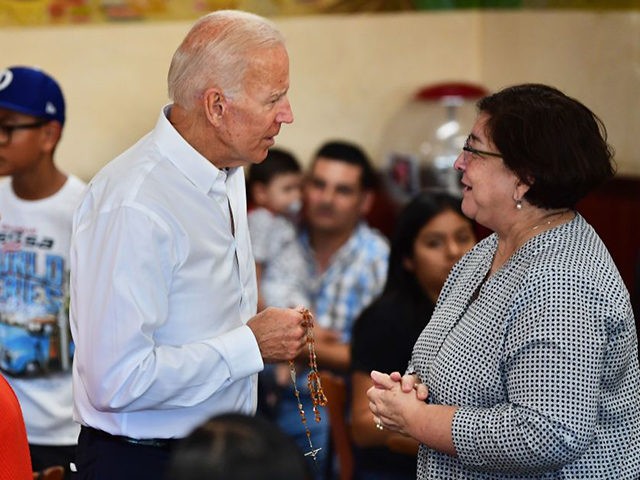 Several Catholic bishops have emerged as vocal critics of President Joe Biden as he “brags” about being Catholic while advocating for the most radically pro-abortion, life-destroying policies in U.S. history.

Bishop Rick Stika, of Knoxville, Tennessee, is one of them.

On Tuesday, the bishop lamented that Biden touts his faith often and publicly but does not practice what he preaches, Breitbart reports.

“So sad that the President likes to pull out his rosary and touts his devotion of Our Lady of Guadeloupe as he forgets another title for her: ‘Our Lady of Life,’” Stika wrote on Twitter. “He likes to brag on his Catholic background when convenient. So very dishonest!”

Biden displayed his rosary beads Monday during a virtual meeting with Mexican President Andrés Manuel López Obrador and mentioned how he often “paid my respects to the Virgin of Guadalupe” when he visited Mexico, according to the report.

Responding to the meeting, Stika said Catholics are judged by their actions, not just their words.

“So how can you judge another on their commitment to the Catholic Church?” he wrote. “Not their words do we judge but rather their actions. Mr. Biden promotes unrestricted abortion and what does he do today? Biden mentions Our Lady of Guadalupe, shows Rosary in meeting with Mexican president.”

Several months ago, Stika also asked Biden to consider how he will account to God for his support for killing innocent unborn babies in abortions. And in 2019, Stika said he would excommunicate any Catholic politician who advocates for abortion on demand.

“Enough is enough. Excommunication is to be not a punishment but to bring the person back into the Church. It’s like medicine for them,” Stika wrote. He said supporting killing unborn babies through all nine months of pregnancy is “so hideous and vile that it warrants the act.”

Many Catholics have expressed frustration that church leaders have not been more vocal about Biden’s hypocrisy, especially his plans to expand the killing of unborn babies in abortions by forcing taxpayers to fund their deaths. Some have called on the bishops to refuse communion to Biden until he repents, and a few bishops have agreed. Others have said he should be allowed to receive the Eucharist.

Biden already has made abortion on demand a priority in his administration. Just two days after taking office, he celebrated the anniversary of Roe v. Wade, the U.S. Supreme Court ruling that led to the unnecessary killing of more than 62 million unborn babies in abortions.

Days later, Biden got rid of the Mexico City Policy and restored tens of millions of taxpayer dollars to the International Planned Parenthood Federation, which kills babies in abortions around the world and lobbies to legalize abortions in pro-life countries. Pro-life leaders warned that the money will be used to pressure countries in Africa and South America to legalize the killing of unborn babies in abortions.

Biden’s choices to help lead his administration are even more radically pro-abortion. California Attorney General Xavier Becerra, the nominee for health secretary, is fighting in court against a charity of nuns who serve the poor and elderly. He also defended a law that would have forced pro-life pregnancy centers to advertise abortions, and he is prosecuting the undercover journalists who exposed Planned Parenthood’s aborted baby body parts trade.

Now, Biden is pressuring Congress to pass the Equality Act, which would strip away conscience protections for pro-life medical workers and create a “right” to demand an abortion.

He also supports getting rid of the Hyde Amendment, which prohibits taxpayer funding for most abortions in Medicaid and other federal programs. It has saved an estimated 2.4 million babies from abortions, according to the Charlotte Lozier Institute.