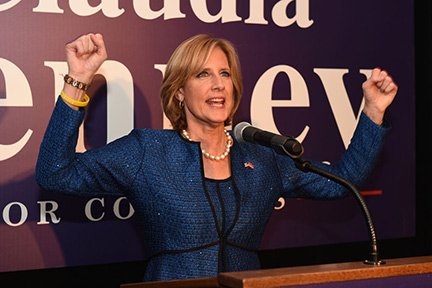 The final House race from the 2020 general election may be near its conclusion. In the undecided race in New York’s 22nd District, pro-life Republican Claudia Tenney is currently ahead by 120 votes over the incumbent Democrat and has declared victory.

If she prevails, it will cap off an already tremendous election cycle for pro-life Republican women.

A spokesperson for Tenney stated, “Boards of Elections in all eight counties completed their court-ordered canvass yesterday. Republican candidate Claudia Tenney prevailed in that process. It’s time for Anthony Brindisi’s Washington operatives to accept the results and stop playing politics with the integrity of our elections.”

During his two years in Congress, Rep. Brindisi had a 100% pro-abortion voting record. He had been endorsed by Planned Parenthood, the nation’s largest abortion provider.

Tenney‘s 120 vote margin is out of over 325,000 votes cast. The next time that you are tempted to think your vote does not matter, remember this race!

Every vote truly does matter.

The Tenney campaign also noted, “Court proceedings in the race began more than 90 days ago, and Claudia Tenney has led in the vote count every step of the way. The court’s review has been thorough, transparent, and fair to all parties. Ballots have been scrutinized and we are confident all legal votes have been counted.”

Her opponent, pro-abortion incumbent Democrat Anthony Brindisi, has not conceded. Ironically, one of the arguments presented by Brindisi’s lawyers centers around errors within the vote-counting machines. Court challenges continue.

Claudia Tenney’s first run for Congress was in 2014 when she challenged a pro-abortion Republican incumbent in the primary. Although that effort was unsuccessful, it laid the groundwork for her victory two years later when the seat was open. During her term, she championed numerous pro-life bills and maintained a 100% scorecard from National Right to Life. She was defeated by Brindisi in 2018 during an election cycle many likened to a “blue wave.”

If Tenney were ultimately to emerge victorious, she would join a group of over a dozen pro-life candidates who flipped pro-abortion seats in 2020. She would also increase the roster of pro-life women in Congress, a number which more than doubled after the 2020 elections. While Democrats currently hold the majority in the House, they currently have the slimmest majority in modern history.