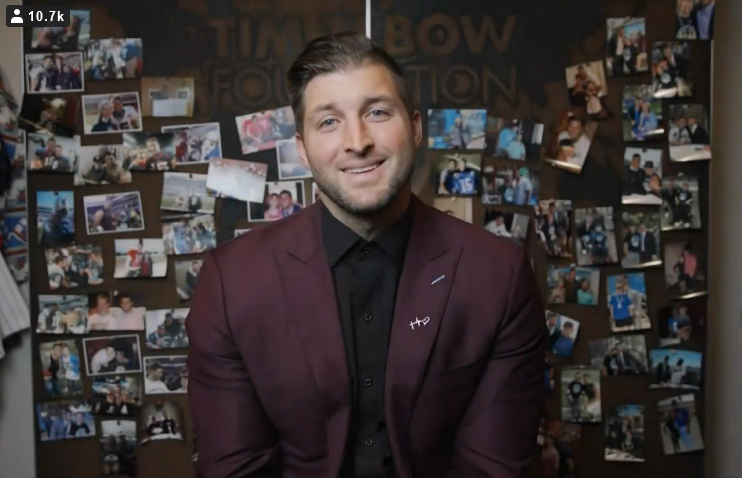 Former NFL star Tim Tebow encouraged Christians to stand strong for life Friday during the virtual March for Life, noting that sports trophies and achievements are temporary but the fight to protect the voiceless is “worthy.”

“You know, I’ve given so much of my life for sports … but that’s for trophies that rust …” Tebow said, according to Townhall columnist Katie Yoder. “But you see, being passionate about Jesus … and passionate about those that have been thrown away and neglected and forgotten? That is worthy.”

He told pro-lifers not to lose hope or give up the fight but to continue advocating for life at all stages, born and unborn.

“You see, when you’re pro-life, I believe that we’re called to be pro-life in every area – for the unborn, for the hurting, for the orphan, for the thrown-away, for the special needs, for the trafficked, for all of humanity,” he said.

A Heisman Trophy winner, football analyst and advocate for people with special needs, Tebow has his own pro-life story. He told the March for Life viewers that his mother chose life for him in difficult circumstances while his family served as missionaries in the Philippines.

“The pregnancy was not easy,” Tebow said. “In fact, they didn’t even believe that she was pregnant at first. They actually thought it was a tumor.”

When doctors realized she was pregnant, they urged her to have an abortion, he said.

“But she decided that she was going to trust God, even when the doctor said it could, and might, cost her her life,” Tebow continued.

Miraculously, Tebow and his mother both survived. He said the doctors were astonished and told his mother, “I don’t know how he had the nourishment in the food to be able to survive.”

He encouraged pro-lifers to always be pro-life “all the time, everywhere, no matter what.”

The national March for Life was Friday. Organizers canceled the in-person event earlier this month due to concerns about the coronavirus and political unrest in the capital. In its place, the March for Life held a virtual rally to mark 48 years of legalized abortion and to call for restored protections for babies in the womb.

A small group of pro-life leaders also marched to the U.S. Supreme Court building on Friday to mourn for the 62 million unborn babies who have been killed as a result of its infamous ruling Roe v. Wade.