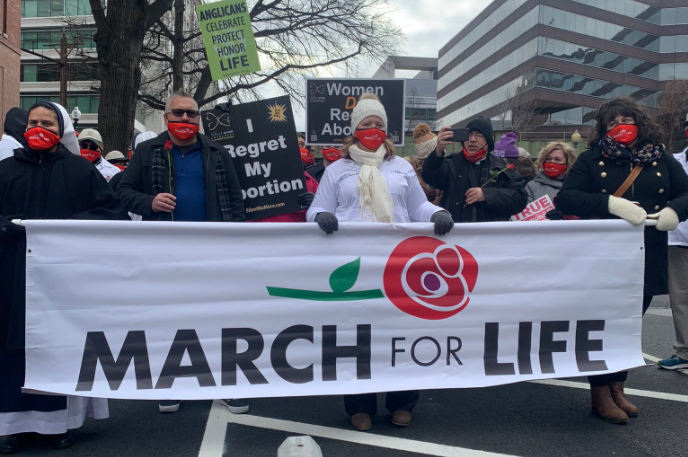 The largest annual gathering of pro-life people worldwide doesn’t get the media attention it deserves – since 2013, the broadcast networks have spent less than a half hour in total on the March for Life. But in a time of divisiveness and political upheaval, the 2021 pro-life march is more important than ever, as it calls for unity with this year’s theme, “Together Strong. Life Unites!”

The March for Life marks the anniversary of Roe v. Wade, the 1973 Supreme Court case that legalized abortion nationwide. While many in the media downplay it, the event unites tens of thousands to hundreds of thousands as they celebrate life and challenge abortion. These pro-life Americans make sacrifices to attend: They happily brave brutal weather and take time off from work or school to travel from all across the country to Washington, D.C. Yes, the 48th annual march, on January 29, will look a little different – a little smaller. But it is no less important, as it represents the estimated 62 million lives missing due to abortion.

In the past, the broadcast networks – ABC, CBS, and NBC – have failed to give the many marchers, and the unborn they march for, the time they deserve. Here’s the breakdown of the time that the morning and evening news shows have dedicated to the March for Life, in the past eight years:

These numbers come from MRC Culture and NewsBusters, where I once monitored the network coverage of the march (and, now, my former colleagues, Kristine Marsh and Curtis Houck do). 28 minutes and 57 seconds translates into an average of less than four minutes per year. A few measly minutes for the tens to hundreds of thousands of marchers. For the millions violently destroyed in abortion.

They’ve been much more generous to other events such as the Women’s March or even baby pandas.

Due to the pandemic and the new challenges law enforcement face around the Capitol, the 2021 rally and march are taking place virtually. Representing pro-life Americans everywhere, a few, select pro-life leaders will carry red roses to the Supreme Court to commemorate the unborn missing from our society.

These leaders also intend to represent this year’s theme: “Together Strong: Life Unites!”

“Though each of us brings our talents to the life movement, we are far stronger together,” Jeanne Mancini, the president of March for Life, explained in a blog post following the theme’s announcement.

“From choosing adoption to joyfully accepting the responsibilities of fatherhood and motherhood, from sidewalk counseling to lobbying, from prenatal care to post-abortion support, from praying for the most vulnerable to voting to protect them, everyone is desperately needed,” she urged. “Our gifts and talents, united in the service of one common mission, make us strong.”

Abortion, she added, divides. It breaks the strongest natural bond of love in the world – that between a mother and her child. It divides fathers from their children, siblings from their brothers and sisters, grandparents from their grandchildren.

“But perhaps the most tragic consequence of abortion is that it divides the world from love,” Mancini continued. “Every child brings love into the world, so every life lost to abortion is a loss of love in the world.”

The march also unites people from different walks of life: young and old, men and women, Republicans and Democrats, Christians and atheists, people of all ethnic and racial backgrounds.

But the march doesn’t just unite the living with one another. It unites the living to the dead. The born to the unborn. Voices to the voiceless.

Our country groans under the weight of this mighty loss of children – those meant to be our brothers, sisters, friends, classmates, colleagues – in a number comparable to the population of Italy. This is why Americans march: to champion the inherent dignity and worth of the unborn person from the moment of conception. To challenge abortion as the intentional destruction of innocent life.

And while pro-life Americans can’t physically march in Washington, D.C. this year, they can march in different ways: from saying a prayer or reaching out to a pregnant friend to donating to a pregnancy center or babysitting for a mom in need. That’s because pro-life is a way of life, and we march – together – everyday.