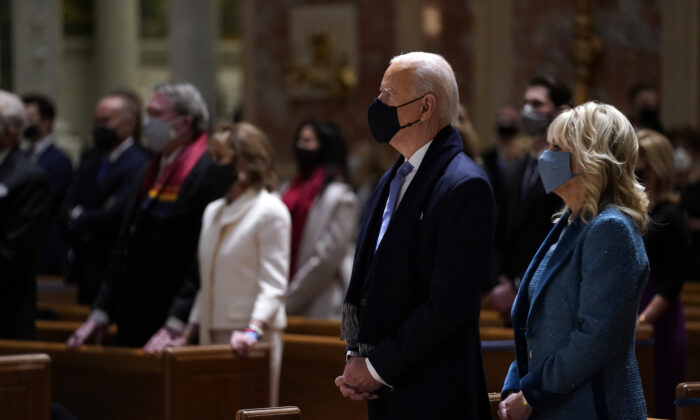 Joe Biden attended church this morning, which would be meaningful only if he understood the basic Christian principle that all children are created in God’s image and are loved by Him and given purpose even while we are in our mother’s wombs.

Biden, his wife Jill Biden, Kamala Harris, and her husband Douglas Emhoff, all attended church this morning. Sadly, as soon as late today or tomorrow, Joe Biden is expected to force Americans to send hundreds of millions of dollars to International Planned Parenthood so it can promote its abortion agenda across the globe. As the Bible calls Christians to share the message of Jesus Christ to everyone around the world, Biden will export abortion instead.

The four attended a church service at Cathedral of St. Matthew the Apostle, which is the seat of the Archbishop of the Roman Catholic Archdiocese of Washington. As a Catholic, Biden has come under intense criticism from pro-life Catholics who are upset that he departs from longstanding pro-life church teaching.

“From day one, Joe Biden and Kamala Harris will head the most extreme pro-abortion administration in U.S. history. They will have no qualms about checking every item off the abortion lobby wish list,” she told LifeNews.com.

She added: “Susan B. Anthony List vows to fight for unborn children and their mothers against Democrats’ deadly agenda. We will vigorously oppose and defeat efforts to expand the Supreme Court, codify Roe into law, and force taxpayers to pay for abortion on demand. While we fight back against these extreme policy goals, we will work tirelessly to win pro-life control of the House and Senate in 2022. The pro-life movement will never quit until the lives of unborn children and vulnerable mothers are protected under the law.”

In a column at Catholic New York, the New York archbishop defended Catholics’ focus on protecting unborn babies from abortion as Biden, a pro-abortion Democrat, prepares to take office, according to the Catholic News Agency.

Dolan said a politician once asked him why Catholics are “so hung up about abortion” – as if that is a bad thing.

“Actually, we’re obsessed with the dignity of the human person and the sacredness of all human life!” Dolan replied. “Yes, the innocent, helpless life of the baby in the womb, but also the life of the death row prisoner, the immigrant, the fragile elderly, the poor and the sick.”

Now, as Biden and Democrat leaders push plans to expand abortions by forcing taxpayers to pay for them, the archbishop said Catholic and non-Catholic pro-lifers alike are worried.

“We’re even more ‘hung up’ now, as our new president, whom we wish well, and who speaks with admirable sensitivity about protecting the rights of the weakest and most threatened, ran on a platform avidly supporting this gruesome capital punishment for innocent pre-born babies,” Dolan wrote.

He said pro-abortion politicians and abortion activists used to advocate for “safe, legal and rare” abortions, but they are not doing that anymore.

“How can we sustain a culture that recoils at violence, exclusion, suicide, racism, injustice, and callousness toward those in need, if we applaud, allow, pay for, and promote the destruction of the most helpless, the baby in the womb?” Dolan asked.

“So much for the reassurances!” he continued. “Abortion remains the hottest issue in our politics, with polls showing that most Americans want restrictions on its unquestioned use, and do not want their taxes to pay for it.”

Biden and Democrat leaders are pushing for more abortions despite strong public objections. Among other things, they want to end the Hyde Amendment, which prohibits taxpayer funding for elective abortions in Medicaid and other federal programs. Without it, taxpayers could be forced to pay for tens of thousands of unborn babies’ abortion deaths every year.

Last year, Biden, who claims to be a devout Catholic, even called abortion an “essential medical service” during the coronavirus pandemic. His health care plan would expand abortions as well by forcing insurance companies to cover abortions as “essential” health care under Obamacare.

The question, therefore, should not be why Catholics are so concerned about abortion but why more Americans are not. Each abortion destroys the life of a unique, irreplaceable human being, a child, and nearly 1 million are killed in abortions every year.

“As a matter of fact, this is not a uniquely ‘Catholic’ issue at all, but one of human rights,” Dolan said. “We didn’t learn that abortion was horrible in religion class, but in biology, and in our courses on the ‘inalienable rights’ tradition in American history.”

In the midst of political divisiveness and violence across America, Dolan said he hopes that “violence will subside, that civil discourse will again become the norm for all sides, that a respect for the sacredness of all life and the dignity of the human person will be revived, and that the sanctuary of the womb will be off-limits to violent invasion.”