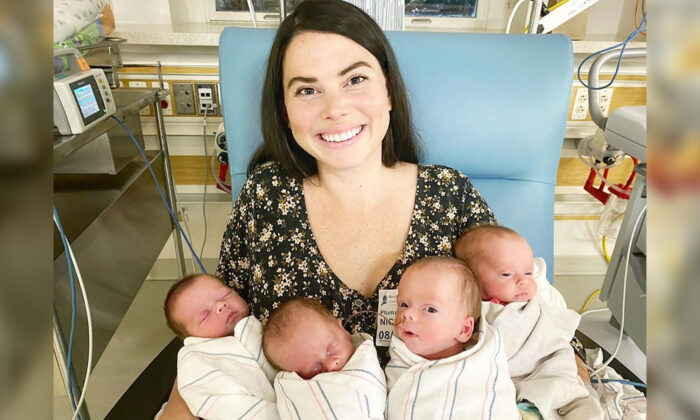 Maxine and Jake Young thought they may never have children.

Today, the Youngs are parents to nine children: four adopted and five biological including quadruplets who were born in July. Though the Youngs’ lives are chaotic, they said they feel very blessed by all their children.

“We didn’t plan to have this large of a family,” Maxine told People magazine recently. “But it just seems like these babies are meant to be.”

Their family first grew in July 2017 when the couple welcomed three foster children into their home, according to the report. The three siblings soon became four when, a month later, they were asked to take in the children’s baby sister, too.

Before they had much time to get used to parenting, the couple learned that they had another child on the way: They were pregnant.

Maxine gave birth to their son Henry in October 2018. Then, a year later, the Youngs adopted the four foster siblings – making them a family of seven, the report continues.

But their surprises were not over.

A short time later, Maxine learned that she was pregnant again. This time, she was carrying four babies, quadruples whom they conceived naturally against massive odds.

The couple, excited and nervous, were advised to consider [aborting] two of the fetuses to increase the babies’ chances of survival. The couple steadfastly refused. On July 31, Maxine delivered babies Theo, Silas, Beck, and Cecilia via a C-section at 32 weeks of pregnancy.

“Meeting the babies was an indescribable moment,” Maxine wrote on Facebook. “All of the struggles from the past few months were immediately forgotten … in that moment, everything we have been through was worth it.”