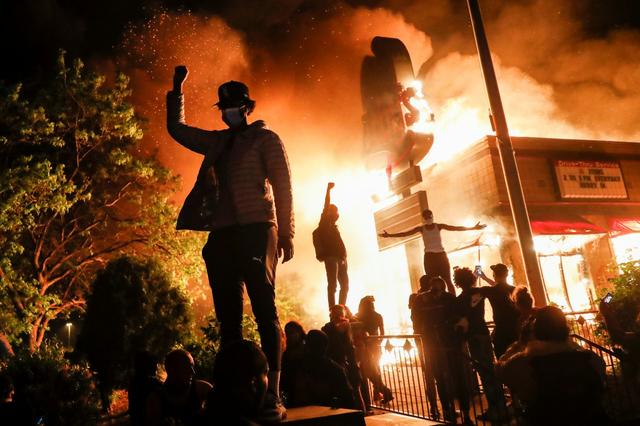 What do you do when you want someone to think they’re getting a different product or service (even though it’s the same thing)? You rebrand it. For mainstream media, it’s calling something a fact-check. And it’s increasingly used to pretend their lies are still true.

That’s exactly what PolitiFact did in its effort to compare the (many, many, many) Black Lives Matter riots with the recent Capitol riot. Just for context, PolitiFact was created by the Tampa Bay Times (see another one of my takedowns of TBT’s blatant #fakenews piece about Planned Parenthood). TBT and PolitiFact are owned by the leftist Poynter Institute, which is responsible for Facebook’s “fact-checking” regime. Ahhh, clarity.

The recent and horrific riot at the U.S. Capitol Building by a crazed group of pro-Trump supporters cannot be justified or revised. Funny how a few rioters somehow define all Trump supporters, but thousands of BLM rioters in cities thrown into chaos don’t define a movement. It was a despicable act of violence that directly led to the deaths of two people: U.S. Capitol Police Officer Brian D. Sicknick, who was fatally injured by the mob, and rioter Ashli Babbitt, who was shot by Capitol Police inside the building, while three others died from “medical emergencies,” authorities said. All involved in the attack should be arrested and prosecuted.

As a Christian, I abhor violence, and I reject it as a means to achieve a political end.

Yet so many seem to suffer amnesia of the anarchy that has gripped our nation for the past six years under the banner of #BlackLivesMatter. Since its emergence in 2014 (and no better handled under the Obama/Biden administration), we’ve heard nothing but justifications, praises and denials from mainstream media about the massive destruction caused in the name of racial equality.

PolitiFact immediately suggests the alleged difference in responses was…drum roll, please…racism. “And there is no escaping that the people the police faced looked different in the two situations,” those hard-working fact-checkers proclaim. Well, of course!

In an act of leftwing delusion, PolitiFact paints an innocent picture of the Black Lives Matter chaos in DC during the summer. PolitiFact only refers to BLM activists as “protesters” and “demonstrators.” They certainly didn’t extend the same graciousness to Trump supporters who were referred to as “rioters” 11 times. Biden is quoted as calling them a “mob of thugs”, a description he never once gave to the thousands of BLM rioters across the country that left cities in smoldering ruins this past summer. Perhaps he missed all the unbiased news coverage while tucked away in his basement.

This is the beginning of the statement PolitiFact issued in regard to BLM rioters’ actions: “Tensions flared when some protesters stopped at the White House, pushing down metal barriers that separated them from law enforcement before the march continued on through the city.” #Fakenews.

The rest of the BLM description was filled with details about the (implied) excessive local and federal police response, detailing the numbers and the type of anti-riot equipment without providing any context of why it was necessary. PolitiFact summed up the BLM DC riots this way: “The crackdown was aggressive, but no protesters or police died in the District.”

Oh, ok. Shouldn’t a fact-check include all the relevant facts? How about the widespread violence, the arson (including the fire set in the basement of the historic St. John’s Episcopal Church), the looting and destruction of businesses, vandalism of federal monuments, “demonstrators” assaulting law enforcement officers, and over 60 Secret Service officers injured?

Nationwide, more than 700 law enforcement officers were injured in BLM “peaceful protests” across the country following George Floyd’s tragic death. Some were killed like retired police captain David Dorn whose black life didn’t seem to matter to the movement. Hundreds of stores were looted from Santa Monica to Chicago to New York City. The Insurance Information Institute labeled the riots a “multi-city catastrophe event” and “the costliest civil disorder in history.” Axios reported that the massive damage resulting from “mostly peaceful” BLM protests exceeded $2 billion.

Then, as if someone were submitting a paper for a high school creative writing class, PolitiFact strangely switches gears to provide vibrant details about Trump supporters’ struggles against the police: “But as soon as one person decided to press on, the momentum swelled. The marchers and officers struggled over control of the barricade. The weight of the crowd soon sent officers sprawling backwards.” The article then proceeds, by timestamp, to detail the play-by-play of the (inexplicably, at least for now) easy and violent breach of the Capitol building.

Cities like Portland and Minneapolis look like war zones. It’s okay; it’s social justice. I’m amused at how a Vox writer exemplified the Left’s hypocrisy quite accurately in two differently titled articles. The first, about Black Lives Matter, is entitled: “Riots are destructive, dangerous, and scary but can lead to serious social reforms.” The subtitle continued: “To prevent more violent uprisings and protests, we need to take their causes seriously.” His take on the pro-Trump Capitol riot, however, had a slightly different tone, as he entitled it: “Every person who forced their way into the Capitol should be arrested.” The subtitle was even more subtle: “Lock them all up.”

Yes. There are two radically different responses. The explanation isn’t racism. But it is color. I call it #BlackPrivilege. The explanation is also political. I call it #LiberalPrivilege. Despite numerous deaths, cities burning, more racial division, looting, vast destruction and calls for “Black Power” and the defunding of police, corporations shelled out millions to the Black Lives Matter movement. In the wake of the politically dubbed “Capitol Insurrection,” Corporate America has gone out of its way to denounce conservatives, show outrage over deaths, get a conscience about violence against law enforcement, and feign disgust over damage to government property. Suddenly, law and order matter. Civil behavior matters. But it doesn’t ever seem to matter when it comes to #BlackLivesMatter.