Amazon terminated its contract with free speech platform Parler for “violent content on your website.” But Amazon itself deals with merchandise that advocates the death of all Republicans or specifically targets President Donald Trump.

The Media Research Center found at least 204 examples of merchandise sold on Amazon that promoted violence, either toward President Donald Trump, Republicans or members of the police force. Riot gear, including tasers, brass knuckles and stun sticks were also sold. Some of these violent products included a flag with a graphic image of Trump blowing his brains out, a mug with the slogan “Where is Lee Harvey Oswald now that we really need him?” and a black T-shirt with a red slogan, “Kill All Republicans.” The shirt that urged the death of Republicans was even a sponsored listing on Amazon.

Amazon accused Parler of “potential hate speech,” while it is selling actual Nazi memoribilia and jewelry covered with swastikas. And while Americans were outraged at the death of police officer Brian D. Sicknick who was struck with a fire extinguisher at the Capitol riot, Amazon sells at least 130 pieces that condone that kind of violence with the hateful slogan, ACAB (All Cops Are Bastards). That ACAB term is popular with rioting members of Antifa.

The Amazon Terms of Service states, “Amazon does not allow products that promote, incite or glorify hatred, violence, racial, sexual or religious intolerance or promote organizations with such views. We’ll also remove listings that graphically portray violence or victims of violence.” These terms of service do not apply to media. Therefore, the Media Research Center did not examine music, books, television or movies.

Amazon is good at policing outside sites it doesn’t like. It doesn’t apply the same standards to itself. The company removed QAnon products from its website on Jan. 11, according to NBC News. The news outlet warned, “Amazon said vendors who attempt to continue to sell such products could be banned from its site.”

‘Kill All Republicans’ As a Sponsored Listing

The vendor named Florence & Partner sells a black T-shirt with a red slogan, “Kill All Republicans.” This product was sponsored by Amazon, which means the vendor paid to have the product advertised on the platform.

However, the product violates Amazon’s sponsored product guidelines, which prohibit “Content that promotes hate, incites violence or intolerance, or advocates or discriminates against a protected group, whether based on race, color, national origin, religion, disability, sex, sexual orientation, disability, age or another category.” Amazon’s sponsored product guidelines also prohibit “Content related to campaigns, elections, or political issues of public debate; that advocates for or against a politician or a political party; or that personally attacks a political figure.”

The Media Research Center was unable to find any products that advocated for the death of all Democrats.

Other forms of violent merchandise included a T-shirt that featured the slogan, “Hospitalize Your Local Fascist.” A knife with a red drop of blood formed part of the graphic on the front of the shirt. The brand FUNKI SHOP sold several items of clothing with similar messages, including “Punch TERFs,” and “Goodnight Alt-Right.” TERF is a hateful leftist term that stands for trans exlusionary radical feminist. Journalist Meghan Murphy argued that the term TERF was hate speech. She wrote, “Men with large platforms who are publicly associated with Antifa and groups like the Democratic Socialists of America (DSA) have amplified the ‘punch TERFs’ and ‘TERFs get the guillotine’ message proudly, with the support of their comrades.”

Guillotines, a popular symbol among Democratic Socialists, are also bought and sold on Amazon. The slogan “Fuck Around and Find Out” was juxtaposed on a T-shirt over a picture of a guillotine. Another shirt had the slogan, “Be the guillotine you want to see in the world.”

Historical memorabilia has a place in the world. Amazon recognizes that statement in its Terms of Service, saying, “Amazon reserves the right to make a determination on the historical value of the item.” However, even among the Nazi stamps and the coins with swastikas, some modern pieces of jewelry with swastikas on them are being sold. A ring covered in swastikas and a skull ring with a large swastika on the top are sold. Even though the skull ring is captioned as Buddhist, the symbol is not the same as the Buddhist symbol. 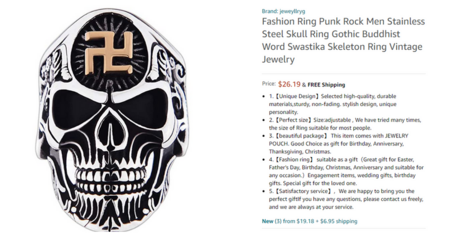 Regardless of how one’s politics may lie, to wish for or advocate for the violent death of a politician is wrong. Yet several pieces sold by Amazon seem to delight in fantasies of Trump blowing his brains out, Trump being shot (albeit with Nerf guns), or Trump’s head being stabbed with knives.

The “Donald Trump Knife Rack,” marketed as the “Perfect Gift,” features the head of Trump filled with steak knives. It is also labeled as an “Exceptional Conversation Starter.” A mug asking the whereabouts of President John F. Kennedy’s assassin, Lee Harvey Oswald, is also available for purchase on the platform.

The brand Partner & Alana sells several pieces, from flags to T-shirts, featuring a gory drawing of Trump blowing his brains out. Blood and body parts are scattered across the front of the shirt. The product description says, “The Only Walls We Build are Walls of Death.”

The liberal Anti-Defamation League defines ACAB as “a slogan of long standing in the skinhead subculture.” It is classified as a “hate slogan.” The magazine GQ described it: “ACAB has proven flexible, and not always in good ways: it’s embodied ideas of varied nuance and intensity, from a casual expression of rebellion to nuanced anarchist thought to more ominous skinhead ideology.”

But none of these warning signs from the left have stopped Amazon from selling merchandise that features police officers depicted as pigs, burning police cars, and a Simpsons police character with a knife protruding from his head. The gory images on all these products were emblazoned with the slogan ACAB.

One product, a refrigerator magnet, featured a dead pig’s head wearing a policeman’s cap. A knife was stuck through the head and blood was drawn coming out of the head. The product description boasted, “EASY to place on a car and even easier to remove, these are a great alternative to bumper stickers.”

Another decal was a sketch of a cat throwing a Molotov cocktail (a homemade bomb). The bottle said “ACAB” on it. One Amazon customer left a review remarking, “People are literally dying and instead of signing petitions or donating you try to turn their death and pain into a stupid a$$ sticker.”

The Washington Post editorial board in Sept., 2020 wrote that even though they believed white supremacists were more responsible for violence, “That doesn’t mean that online provocateurs who endorse violence against the police should be shrugged off.”