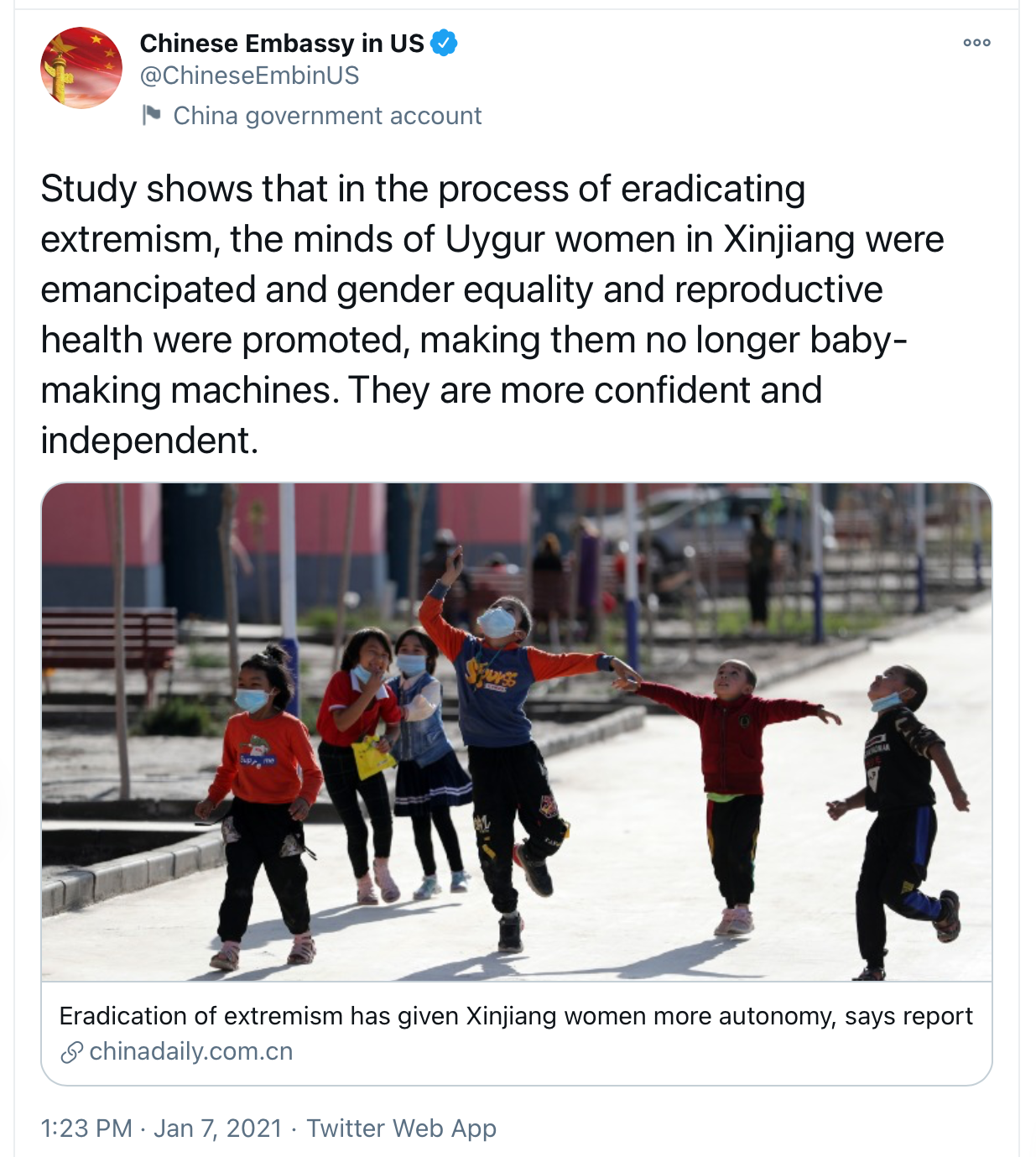 The Chinese Government has denied that ethnic Muslim minorities in Xinjiang are being coercively sterilized following a since-removed tweet by the Chinese embassy, numerous sources reported.

The Chinese embassy in the U.S. had touted the decreased birth rate and eradication of religious extremism in Xinjiang on Friday, where reports have detailed forced labor camps and sterilization, claiming that the country’s policies “emancipated” Uighur women. Twitter deleted the tweet after outcry. A Chinese government spokesperson pushed back on claims that the policies were coercive or forced, and that decisions about contraception were made by individuals, not the government.

“As for the so-called forcing ethnic minority women in Xinjiang to wear IUDs, or undergo tubal ligations or abortions, it is even more malign.”

The embassy tweeted that “eradicating extremism, the minds of Uygur women in Xinjiang were emancipated and gender equality and reproductive health were promoted, making them no longer baby-making machines. They are more confident and independent.”

Twitter deleted the tweet after users said it violated the platform’s policies and advocated genocide. Ars Technica reporter Timothy B. Lee said that Twitter had initially told him that the tweet did not run afoul of Twitter’s rules.

The attached link was for a study by the Xinjiang Development Research Center, reported in the Chinese-government controlled China Daily, that said that the study found that people in Xinjiang were deciding by their own free will to “marry and have children later in life, seeing the benefits of fewer but better births,” and were not as influenced by the Chinese government.

Multiple reports have claimed that Uighur Muslims, an ethnic minority in China, have been forced to work at factories where they undergo “reeducation” in order to pledge their allegiance to the Chinese government. Between 900,000 and 1.8 million Muslims have been detained in more than 1,300 concentration camps in Xinjiang as part of China’s effort to sinicize its population, which includes outlawing fasting during Ramadan and other orders that suppress Muslim identity and religion.

An Associated Press investigation reported that the Chinese government has sought to drastically lower the birth rates of Uighurs and other minorities through forced abortions, birth control, mass detentions and imprisonment.

The Chinese government claims that the camps are intended to eradicate terrorism due to seperatist violence in Xinjiang. The author of the study the embassy linked to, Li Xiaoxia, has presented theoretical foundations for justifying mass birth control measures in Xinjiang, according to the AP — even linking having many children to the potential for terrorism in the region.

Xinjiang spokesperson Elijan Anayat also pushed back on accusations that the camps had nefarious aims, saying that those who entered the camps “achieved stable employment, improved the quality of life and lived a normal life,” echoing past Chinese government claims that the centers are skill training facilities.

LifeNews Note: Marlo Safi writes for Daily Caller. Content created by The Daily Caller News Foundation is available without charge to any eligible news publisher that can provide a large audience.