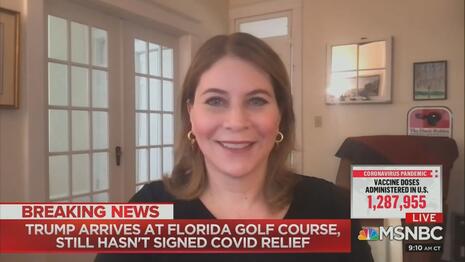 In the lead-up to the election, Rosa Brooks of Georgetown Law School assembled something called the “Transition Integrity Project,” which assembled a team of Obama Democrat activists like her, and the usual MSNBC-style fig leaf of bipartisanship by adding a number of Never Trumpers and Lincoln Project types.

And guess what? In every scenario other than a Biden landslide, the Project predicted “street-level” violence.

Well, Biden didn’t win a landslide, and there’s been no violence, no catastrophe. There was just a nonviolent strategy of filing lawsuits and claiming a vast conspiracy of election fraud. But no one is going to mock Rosa Brooks (or The Washington Post, for that matter) for her lurid effort to panic tender-hearted liberals into voting for Biden, because her “turnout intensity project” had its heart in the right place.

On MSNBC’s Sunday Show with Jonathan Capehart, the host only vaguely referred to Rosa’s “war gaming” without pressing her about how wrong it turned out to be.

She admitted that her group hadn’t predicted Team Trump’s approach, blaming it on the fact that “the twists and turns of Donald Trump’s mind are a little too devious even for us.” And Capehart was too polite to point out that Brooks’ prediction of “street-level violence” had come up a clunker.

Brooks eschewed the idea that Trump has a strategy worth evaluating. ” I don’t think that there’s any point in saying to ourselves things like: huh, I wonder what his strategy here is? He doesn’t have a strategy, other than being a jerk,” she said.

I mean, you brought up the Grinch earlier, Jonathan, and the difference between Donald Trump and the Grinch is that the Grinch didn’t have a golf course, he had to hang out in a freezing cold little cave with his miserable dog so he was ripe for an epiphany. Donald Trump’s got a nice golf course, he is completely happy, he does not care at all that millions of Americans are facing food shortages or imminent eviction.

Brooks even said it didn’t matter whether or not Trump signed the bill in the end: “He’s going to remain the same immature toddler that he has been throughout his presidency.”

All of this underscores that her “integrity project” was hopped up on Trump-hating emotion, which made its projections suspicious from the start. But this kind of loathing is just what gets MSNBC’s audience going in the morning.

Rosa Brooks on MSNBC, calling President Trump a “toddler” whose only strategy is “being a jerk” was sponsored in part by Proctor & Gamble, maker of Gain, Shark Vacuums and Gold Bond.