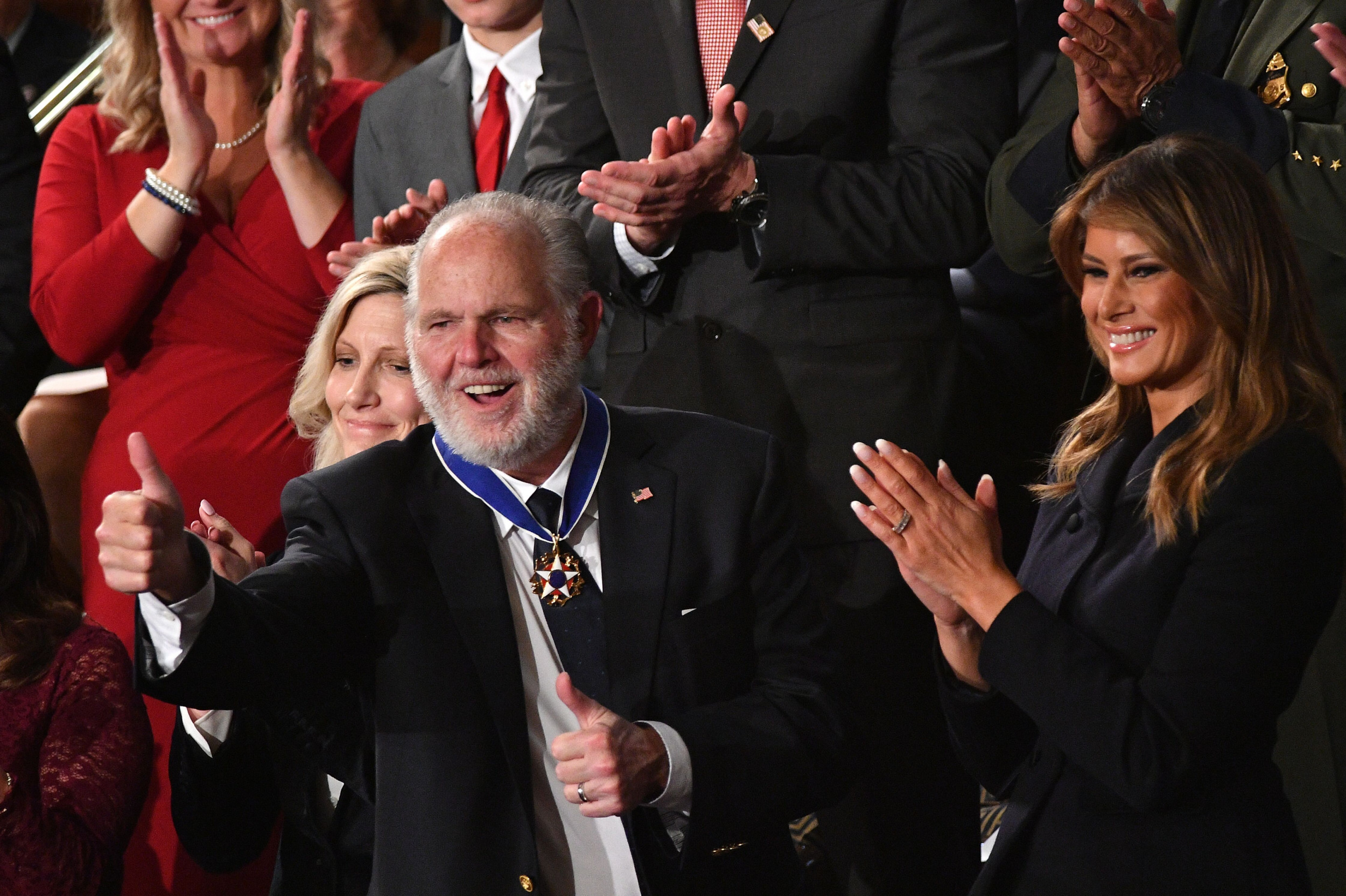 Conservative radio legend Rush Limbaugh shared an emotional message with his listeners on Friday during his final program of the year.

Since being diagnosed with Stage 4 lung cancer, Limbaugh said he has had a year to reflect on the things that are truly important to him.

Most people who pass away aren’t lucky enough to hear their eulogies, he said, but since he has outlived his diagnosis, he’s “been able to receive and hear and process some of the most wonderful, nice things about me that I might not have ever heard had I not gotten sick.”

Limbaugh went on to express how much his listeners mean to him.

“My point in everything today that I’m sharing with you about this is to say thanks and to tell everybody involved how much I love you from the bottom of a sizable and growing and still beating heart, and there’s room for much more. All because I have learned what love really is during this. You know, I have a philosophy there’s good that happens in everything,” he said. “It may not reveal itself immediately, and even in the most dire circumstances, if you just wait, if you just remain open to things, the good in it will reveal itself. And that has happened to me as well in countless, countless ways.”

He likened the gratitude he felt to Lou Gehrig saying during his last baseball game that he felt like the luckiest man in the world.

…But I remember saying to all of you at that time that I had a little bit of understanding of something that had perplexed me for a lot of my life, and that was Lou Gehrig.

Lou Gehrig, the Iron Horse, New York Yankees, set the record for consecutive games played until Cal Ripken came along decades later and broke it. And on the day that Lou Gehrig announced that he had his disease that was forcing him to retire from Major League Baseball, he said to the sold-out Yankee Stadium, “Today I feel like the luckiest man on the face of the earth.”

I didn’t understand that. I mean, here’s a guy who’d just been diagnosed with the most terminal of terminal diseases, and I said, “This can’t be real. He can’t really think he’s the luckiest guy in the world. This is just something that he’s saying because it will play well.” I don’t mean to be insulting Lou Gehrig; don’t misunderstand. I’m just saying, how in the world if you’re being honest can you feel like you’re the luckiest man on the face of the earth?

Well, when I got my diagnosis and when I began to receive all of the outpouring of love and affection from everywhere in my life from so many of you in so many ways and from my family  […] and I understand now what Lou Gehrig meant, ’cause I certainly feel like that. I feel extremely fortunate and lucky. (RushLimbaugh.com)

Limbaugh did his best to prepare devoted listeners for the day when he wouldn’t be able to do the show anymore.

“I want to, but the day will come where I’m not going to be able to, and I want you to understand that even when the day comes, I’d like to be here,” he said, adding that it’s because he wants to continually show them his appreciation. “So I hope you all have a great Christmas, a great New Year, and I hope that the things that are in store for all of us in the coming year are certainly better than what we have endured in 2020.

“I don’t know too many people who’ve enjoyed 2020. There are probably some sickos out there who have. But 2021 has to be better,” Limbaugh continued. “We’re gonna try to make it that way here at the EIB Network. Again, folks, thank you so much. I wish there were a way to say it other than ‘thank you.’ You’re just the best. My family is just the best. Thank you. Merry Christmas, everybody, from all of us to all of you.”

Listeners were in tears over Limbaugh’s heartfelt message, with some fearing it may be his last show ever.

Failing to hold back tears now that Rush may have just done his last show.

The best Christmas gift in the world for those of us at EIB is that @RealRLimbaugh is here celebrating it with us and with YOU in this wonderful, incredible audience who support Rush and us with your love and prayers. We thank God for you and @RealRLimbaugh

I turned to my husband as the final notes of Silent Night trailed off, tears streaming down my cheeks, and said, “I think we may have just listened to Rush’s last show.” I hope and pray I’m not right. We love you @RealRLimbaugh