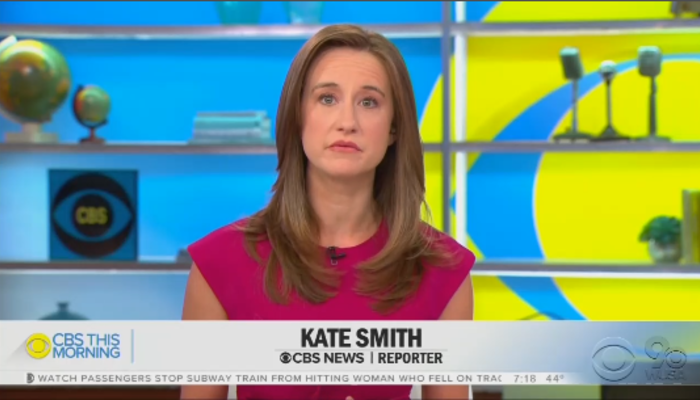 CBS News reporter Kate Smith has developed a reputation for being strongly biased on the abortion issue.

Not a political commentator, columnist or opinion writer, Smith is a reporter – someone who is supposed to investigate and present facts, evidence and positions to readers in a balanced, unbiased manner. But Smith, who describes herself as an “abortion access” reporter, repeatedly has displayed her bias in favor of abortion in her reports and on social media.

On Monday, she slammed pro-life Vice President Mike Pence as “incredibly tone deaf” because he is holding a pro-life event as the coronavirus spreads, Fox News reports.

“Taking opinions out of it, the VP holding a ‘Life is Winning’ event while literally thousands of Americans are dying every single day from the virus seems incredibly tone deaf,” Smith wrote on Twitter.

She included a screen shot of an announcement from the White House about the pro-life event, scheduled for Wednesday. Pence plans to highlight the Trump administration’s actions to protect babies in and outside the womb, including defunding the abortion chain Planned Parenthood, appointing pro-life judges and signing an executive order to protect babies born alive in botched abortions.

Smith responded: “VP isn’t wrong — Trump has certainly been the most anti-abortion rights President in history — but this week just doesn’t seem like the right one to be celebrating that as we near 300,000 dead.”

It is tragic that so many have died from the coronavirus, but unborn babies’ deaths to abortion also should be recognized and mourned. Abortions intentionally kill nearly 900,000 unborn babies every year – something Pence and the Trump administration have worked to end. But Smith did not mention that.

Pro-lifers on Twitter quickly pointed out the irony of Smith’s claims.

Becket Adams, a senior commentary writer at the Washington Examiner, responded, “Killing the unborn, you see, is something like dying of a highly contagious disease.”

David Harsanyi, a senior writer at National Review, added: “No better time to bring attention to the widespread intentional destruction of human beings than during a pandemic. One of these two can be stopped.” Later, he amended his comment, writing, “I guess now that we have a vaccine there is shot at stopping both.”

Responding to the criticism, Smith said her comment was “poor phrasing on my part.” However, she did not delete the initial tweet.

“Here’s exactly what I was trying to say,” Smith wrote. “Regardless of your opinion on abortion, using the slogan ‘Life is Winning’ for an event as COVID-19 mortality peaks feels off.”

Bias has become common in once highly respected news outlets. Alexandra DeSanctis of National Review first highlighted Smith’s biased reporting in April. She described Smith as “Planned Parenthood’s ambassador” because of the consistent pro-abortion bias in her reporting and social media posts. Smith’s pieces tend to read more like press releases from pro-abortion groups than fair and balanced reporting. Others have described her reports as “essentially a conduit for the Abortion Industry.”