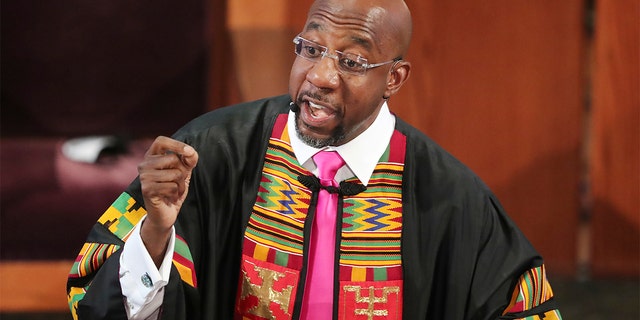 New York Times columnist and CBS News analyst Jamelle Bouie thinks it’s somehow factual and fair comment for leftist pastors to proclaim the Republicans are like King Herod, out to kill the children with budget cuts.

Forget the irony of which party supports the right to kill unborn children. “Pro-choice pastor” Raphael Warnock is being celebrated by Bouie as a role model for Democrat speech.

Bouie mocked Alana Goodman of the Washington Free Beacon for noting a wild Warnock sermon from December 2017, and insisted other Democrats should be spreading the same smears against Republicans:

“While others were sleeping, members of the United States Senate declared war, launched a vicious and evil attack on the most vulnerable people in America,” said Warnock. “Herod is on the loose. Herod is a cynical politician, who’s willing to kill children and kill the children’s health program in order to preserve his own wealth and his own power.”…

Here’s a quick transcript of what Warnock said. *This* is supposed to be damning? https://t.co/vfYAo0fHK7 pic.twitter.com/Sm4JcGtfeo

“The party would be in better shape” if Republicans were compared to a kooky king who was willing to kill hundreds of babies, hoping one of them was the infant Christ.

This is not a new attack from black leftist preachers. Seasoned observers remember Rev. Jesse Jackson comparing Vice President Dan Quayle to Herod at the 1992 Democrat convention in New York City, and none of the networks found that to be a mean-spirited or personal attack. It went like this:

Jesus was born to a homeless couple, outdoors in a stable, in the winter. He was the child of a single mother. When Mary said Joseph was not the father, she was abused. If she had aborted the baby, she would have been called immoral. If she had the baby, she would have been called unfit, without family values. But Mary had family values. It was Herod – the Quayle of his day – who put no value on the family.

Bouie also suggested to object to this line of attack is, you guessed it, anti-black: “the actual insinuation with all of these clips seems to be that preaching in the Black church tradition disqualifies you from public office.” So when you accuse your opponent of aiming to kill children, it should just be accepted as “preaching in the Black church tradition.” Move along, don’t object. MSNBC’s Chris Hayes happily retweeted it.