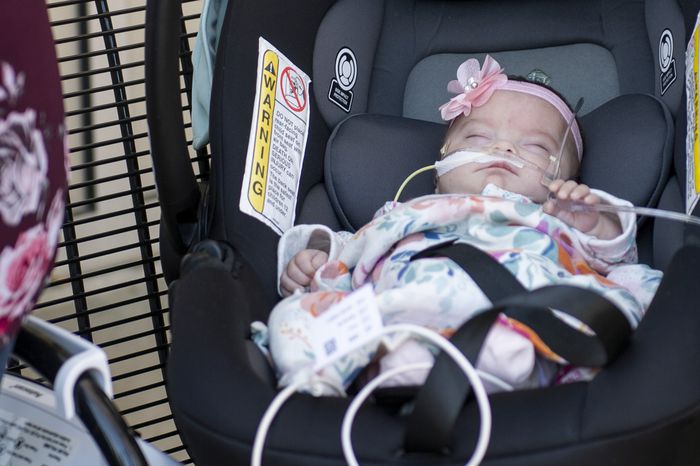 One Michigan family will have a special holiday season with their little girl.  Baby Harper Rose Shultz who was born weighing a mere 11 ounces successfully came home in early November after 128 days in the neonatal intensive care unit (NICU).

Saginaw and Bay City News reports that Baby Harper was born at Saginaw’s Covenant HealthCare on June 29, almost four months ahead of her estimated due date of October 23.  At only 22.5 weeks’ gestation Baby Harper was considered a micro-preemie, a severely premature newborn, and was the smallest baby ever resuscitated at Covenant’s NICU.

Like so many parents, Harper’s father, Patrick Schultz, said his daughter has been a “glimmer of hope” in 2020 which has brought many difficulties amid an ongoing pandemic and political turmoil.  In a video about Harper’s story, he added, “It’s nothing short of a miracle.”  On November 4, when Baby Harper was released from the NICU, her mother, Emilee Wendzik, echoed Schultz’s sentiment, telling reporters, “She’s such a blessing and we are just so thankful.”

Among the challenges that Schultz and Wendzik faced in 2020 was each losing a grandmother.  Harper Rose was named in honor of her great-grandmothers.

Upon release, Baby Harper weighed 6 pounds 10 ounces.  She still receives supplemental oxygen and requires specialized feeding, which is common for babies born so prematurely.  With continued care and therapy, many micro-preemies outgrow all complications and catch up to their same-age peers.

Kristin Knoll, communications manager for Covenant Healthcare, told the Saginaw and Bay City News that the hospital has the only Level III NICU capable of caring for micro-preemies in the region.  Knoll explained that roughly 80 of the more than 700 babies admitted to the 55-bed unit each year are micro-preemies.  Most babies stay for only a short time with the average being 20 days, but especially fragile babies like Harper require a longer stay.

With advances in medical technology, premature babies are thriving as never before.  Even so, Knoll said babies born weighing less than 1,500 grams, or about 3.3 pounds, have an overall survival rate of about 80%.  For babies as small as Harper’s 11-ounce birth weight the survival rate falls to 20%.

Harper’s family was stunned by her early arrival.  After going to the hospital for abdominal pain, her mother never expected that Harper would be born so prematurely.  When nurses weighed Harper at birth, her dad thought there might be an error because she could not possibly weigh so little.

For the care team of medically fragile babies like Harper, the baby is more than simply another patient.  After such a long stay in the NICU, Harper has a bond with the nurses and doctors who cared for her, evidenced by the hugs and tears as she left the hospital with her family.  “We love our babies very, very much and we are always so happy when they get to go home,” said Dr. Renae Reisig, a Pediatrics-affiliated Neonatologist at Covenant HealthCare.

Baby Harper’s incredible journey is inspiring and hopefully forges a path for other babies who will be born early in years to come.  Not all babies at 22 weeks’ gestation receive the same loving and nurturing care.  In many states, babies at the same gestational age can be violently killed in abortion while in the womb.  Other babies born naturally at that age would not receive care but instead be left to die.

Dr. Martin Nwankwo, a Pediatrics-affiliated Neonatologist at Covenant HealthCare, explained, “This is the smallest baby that we’ve ever resuscitated, and to see her grow from where we started to going home now in reasonably good shape, it’s mind-boggling for us.  We’ve never done this before.  And, to be honest with you, half the hospitals in the United States would not have attempted this.”  Harrowing stories of parents begging for their babies to receive care and being denied have gone viral.

Although there were never any guarantees that Baby Harper would be going home healthy, her dad says one doctor told them to “treat every day as a gift.”  Both of her parents took this to heart, making the most of each day they were able to spend with their daughter.  On her due date, her mother said, “We were blessed with 116 days with her earlier than what she was supposed to be here.”

There appear to be many more days ahead for Baby Harper and her family, beginning with a holiday season finally at home as a family.