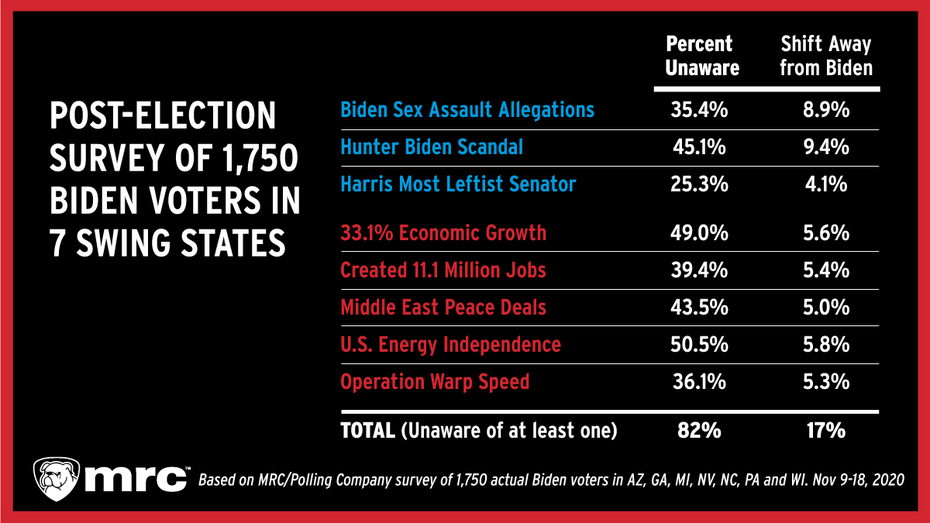 The left-wing news media didn’t just poison the information environment with their incessantly negative coverage of President Trump going into the 2020 election. They also refused to give airtime to important arguments of the Republican campaign — both pro-Trump and anti-Biden — which meant millions of voters cast their ballots knowing only what the media permitted them to know about the candidates.

To measure the true effect of the media’s censorship on the election, the Media Research Center asked The Polling Company to survey 1,750 Biden voters in seven swing states (Arizona, Georgia, Michigan, Nevada, North Carolina, Pennsylvania and Wisconsin), six of which (all but North Carolina) were called for Biden (survey details below). We tested these voters’ knowledge of eight news stories — all important topics that our ongoing analysis had shown the liberal news media had failed to cover properly. We found that a huge majority (82%) of Biden voters were unaware of at least one of these key items, with five percent saying they were unaware of all eight of the issues we tested.

This lack of information proved crucial: One of every six Biden voters we surveyed (17%) said they would have abandoned the Democratic candidate had they known the facts about one or more of these news stories. A shift of this magnitude would have changed the outcome in all six of the swing states won by Joe Biden, and Donald Trump would have comfortably won a second term as president.

Here’s what we found:

■ Burying Biden’s Bad News: The media’s censorship of Biden’s scandals had the strongest impact on this year’s election. According to our survey, more than one-third of Biden voters (35.4%) were unaware of the serious allegations brought against the Democratic nominee by Tara Reade, a former staffer who said Biden sexually assaulted her in the 1990s.

If they had known about Tara Reade’s sexual assault allegations, 8.9% told us they would have changed their vote — either switching to Trump or a 3rd party candidate, not voting for any presidential candidate, or not voting at all. By itself, this would have flipped all six of the swing states won by Biden (Arizona, Georgia, Michigan, Nevada, Pennsylvania and Wisconsin), giving the President a win with 311 electoral college votes.

Even more Biden voters (45.1%) said they were unaware of the financial scandal enveloping Biden and his son, Hunter (a story infamously censored by Twitter and Facebook, as well as ignored by the liberal media). According to our poll, full awareness of the Hunter Biden scandal would have led 9.4% of Biden voters to abandon the Democratic candidate, flipping all six of the swing states he won to Trump, giving the President 311 electoral votes.

The ticket’s left-wing ideology was another issue barely mentioned by the national press. A GovTrack analysis found Biden’s running mate, California Senator Kamala Harris, had the most left-wing record of any Senator in 2019 (even more than self-described socialist Bernie Sanders). Our poll found that 25.3% of Biden voters said they didn’t know about Senator Harris’s left-wing ideology. If voters had the complete story, it would have led 4.1% of Biden voters to change their vote, flipping Arizona, Georgia, Nevada, Pennsylvania and Wisconsin to Trump. The result would have been a Trump victory, with 295 electoral college votes.

■ Hiding Trump’s Successes: The liberal media also prevented many Biden voters from learning about record-breaking positive economic news in the months leading up to the election. The five pre-election jobs reports from June 5 to October 2 showed a record 11,161,000 jobs were created in the extraordinary snapback from the pandemic recession. Yet a large number of Biden voters (39.4%) said they didn’t know about this achievement. If they had, 5.4% said they would have changed their vote; this would have swung Arizona, Georgia, Nevada, Pennsylvania and Wisconsin to Trump, who would have won with 295 electoral votes.

On October 29, the government reported a huge jump in economic growth — 33.1% on an annual basis, double the previous record. Yet nearly half of Biden voters (49.0%) said they had no idea about this record-breaking achievement. Armed with that information, 5.6% said they would have changed their vote, swinging Arizona, Georgia, Nevada, Pennsylvania and Wisconsin and a total of 295 electoral votes to Trump.

We saw the same effect when it came to foreign policy. The President and his team made history by brokering peace agreements with Israel and several of her Arab neighbors — one reason Trump received three nominations for the Nobel Peace Prize. Yet 43.5% of Biden voters had no idea about these historic agreements. The information would have led five percent of overall Biden voters to change their vote, putting Trump in front in Arizona, Georgia, Nevada, Pennsylvania and Wisconsin, for a total of 295 electoral votes.

Energy independence was another Trump success. The President took action to start long-stalled pipeline projects and expand drilling offshore and in the Arctic, and it paid off with America becoming a net exporter of oil for the first time in September 2019. More than half (50.5%) of Biden voters said they did not know about this important accomplishment, either. If the information was known by all, 5.8% of Biden’s voters say they would have changed how they voted. This would have changed the outcome in Arizona, Georgia, Nevada, Pennsylvania and Wisconsin, putting Trump in front with 295 electoral college votes.

One important issue that did get a lot of coverage in 2020: the coronavirus pandemic. But what made the news every night was criticism of the President and his administration. Lost in the blistering barrage of bad news were successes such as Operation Warp Speed, which even before the election was well on track to deliver 300,000,000 doses of a safe vaccine as soon as next year.

Our poll found 36.1% of Biden voters said they did not know about the administration’s key role in promoting vaccine research through Operation Warp Speed. If they had, 5.3% told us they would have abandoned Biden, flipping Arizona, Georgia, Nevada, Pennsylvania and Wisconsin, giving the President 295 electoral votes.

■ Putting It All Together: Looking at all eight of these issues together, our poll found that a total of 17% of Biden’s voters told us they would have changed their vote if they had been aware of one or more of these important stories. This would have moved every one of the swing states into Trump’s column, some by a huge margin. The President would have trounced Biden in the electoral college, 311 to 227. 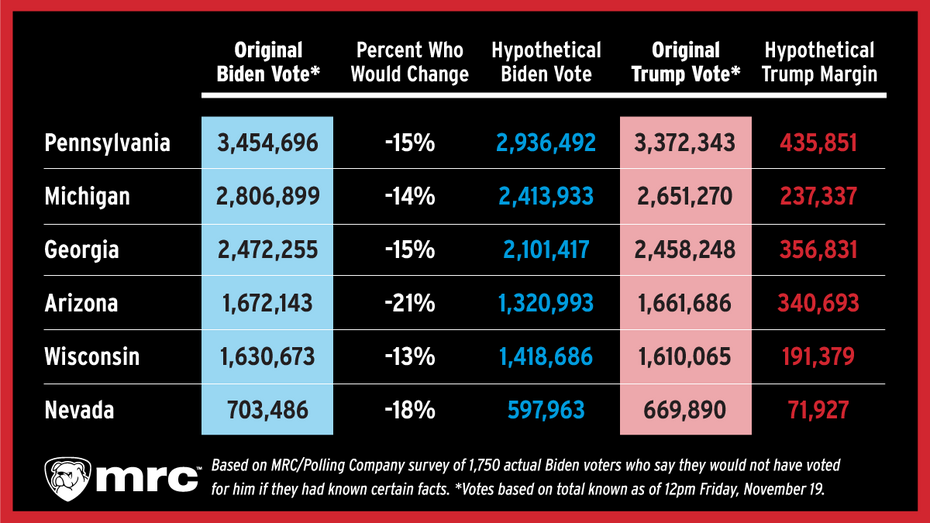 In Pennsylvania, 15% of Biden voters said they would have defected. Using the reported vote totals as of noon on November 19, this would have reduced his total by 518,204 votes, flipping the state to Trump. In Michigan, the percentage who would have left Biden was 14%, deducting 392,966 from his tally and flipping that state, too.

In Wisconsin, Biden would have lost 13% of his voters, taking away 211,987 from his column. In Nevada, the percentage of those who would have left Biden was 18%, or 126,627 voters. Such a shift would have put both of those states in Trump’s column, too.

[In the final state we polled, North Carolina, 21% of Biden’s voters say they would have changed their minds, deducting 563,703 votes from his total and significantly bolstering Trump’s margin of victory in that state.]

The most basic principle of our electoral system is that our leaders are chosen by the people themselves. But if the people are given systematically one-sided information, with crucial facts omitted, then the real power to choose has been stolen from them.

This unique study of the media and voters suggests that’s exactly what happened in 2020.

For this report, The Polling Company conducted a national survey of 1,750 individuals living in Arizona, Georgia, Michigan, Nevada, North Carolina, Pennsylvania and Wisconsin who reported voting for Joe Biden in the 2020 election.