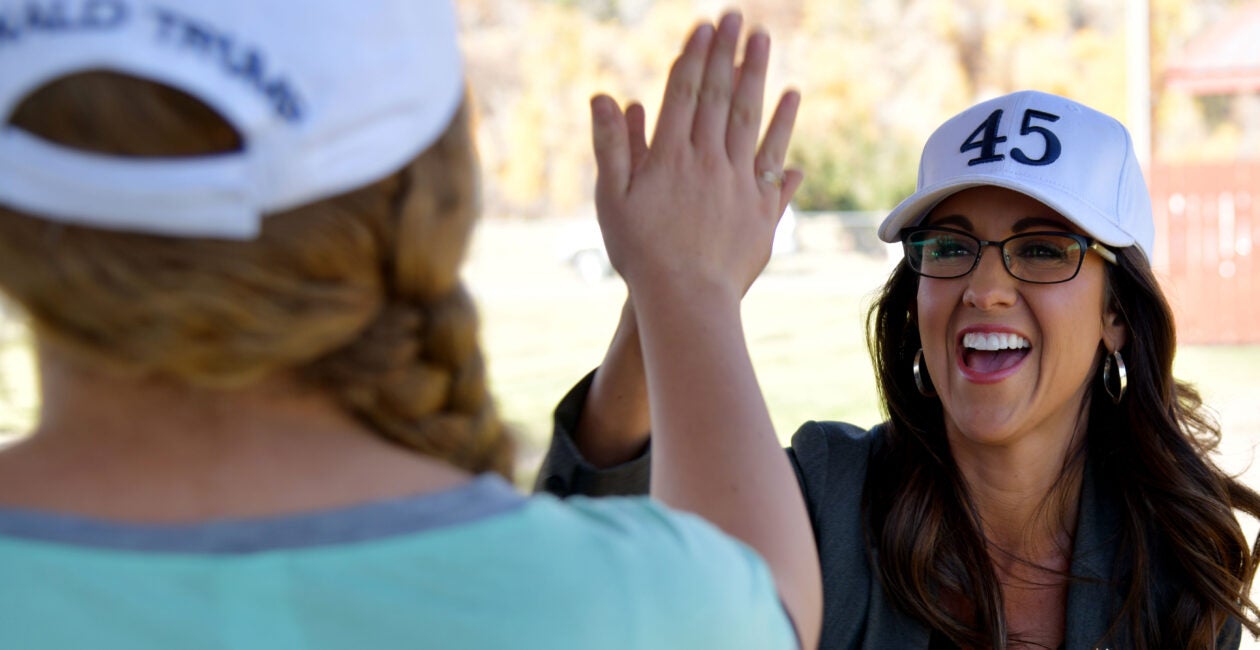 The pro-life movement in Congress made big gains as more than a dozen new anti-abortion Republican women were elected to the House of Representatives on Nov. 3.

The number of pro-life women in the House in the 117th Congress more than doubled, with other races still to be called.

Many of these women defied the polls and managed to flip seats held by Democratic incumbents. Others replaced Republican predecessors.

“The surge of victorious pro-life women candidates in the U.S. House is a stunning blow to [House Speaker] Nancy Pelosi and her pro-abortion agenda,” Marjorie Dannenfelser, president of the Arlington, Virginia-based Susan B. Anthony List, said in a statement.

Here are some of the Republican women who were elected to the House, according to Dannenfelser’s group, a nonprofit dedicated to advancing the pro-life cause.

Maria Elvira Salazar unseated Democratic freshman Rep. Donna Shalala by more than 9,000 votes in the race for Florida’s 27th Congressional District. The 27th District is more than 72% Hispanic and encompasses the neighborhoods of Miami Beach and Little Havana.

Shalala served eight years as secretary of health and human services in the Clinton administration.

The race, a rematch of their 2018 race, was rated likely Democratic in the 2020 Cook Political Report, so Salazar’s win comes as an unexpected surprise for the right-to-life movement.

Salazar had this to say on the issue of abortion: “As a Christian and a mother, I believe in a culture that values and nurtures all life, from birth to natural death. As your congresswoman, I will protect the life of the unborn and also the life and health of the mother.”

In another rematch of 2018, Yvette Herrell defeated Democratic incumbent Rep. Xochitl Torres Small and independent Steve Jones in the race for New Mexico’s 2nd Congressional District. The district is more than 52% Hispanic, and the Cook Political Report rated the race a “Democratic toss-up.”

Herrell is “100% pro-life,” according to her website, and she campaigned on a consistent pro-life record as the state House representative from New Mexico’s 51st District from 2011 to 2019.

According to the pro-life group Minnesota Citizens Concerned for Life, Fischbach has a 100% lifetime voting record on pro-life legislation as a longtime member of the Minnesota state Senate.

Nancy Mace unseated Democratic incumbent Rep. John Cunningham in the race for South Carolina’s 1st Congressional District. Mace made history as just the second elected U.S. congresswoman ever from South Carolina. The district encompasses parts of Charleston, Berkeley, and Beaufort counties, and the race was rated leans Democratic in the 2020 Cook Political Report, so Mace’s win marked yet another unanticipated victory in the House for the pro-life movement.

Just two years earlier, Mace was elected representative in South Carolina’s state House District 99, where she was a strong pro-life advocate. A victim of sexual assault, Mace “successfully advocated for the inclusion of exceptions for rape and incest” in a “fetal heartbeat” abortion ban bill that passed in the South Carolina state House.

According to her website, Bice has “supported pro-life policies and advocated against those that promote abortion” as Oklahoma state senator. She was endorsed by the country’s oldest and largest pro-life organization, National Right to Life.

Ashley Hinson, the current representative in Iowa’s 67th state House District, defeated freshman Democratic Rep. Abby Finkenauer in the race to represent Iowa’s 1st Congressional District. The district encompasses one or more so-called pivot counties—counties that voted for Donald Trump in 2016, but also for Barack Obama in 2008 and 2012. The 2020 Cook Political Report rated the race a “Democratic toss-up.”

The Susan B. Anthony List Candidate Fund described Hinson as “a passionate advocate for families and children,” noting that her “strong pro-life voting record in the state legislature gives us confidence that she will stand up for life in Washington.”

Lauren Boebert defeated Diane Mitsch Bush, the Democratic nominee, and two third-party candidates, in the general election for Colorado’s 3rd Congressional District, after ousting a fellow Republican, incumbent Rep. Scott Tipton, in the GOP primary. Colorado’s 3rd District encompasses one or more “pivot counties,” about 1 in 4 residents in the district identify as Hispanic. The race was rated leans Republican in the 2020 Cook Political Report.

As a grassroots activist, Boebert spearheaded a ballot initiative to end late-term abortion in Colorado. “Lauren is strong, fearless and unapologetically pro-life—the embodiment of the pro-woman leadership our organization exists to promote,” said Marilyn Musgrave, the Susan B. Anthony List’s vice president of government affairs, who herself served three terms as a Republican congresswoman from Colorado from 2003 to 2009.

Lisa McClain defeated Democrat Kimberly Bizon in the open-seat race to represent Michigan’s 10th Congressional District. Republican Rep. Paul Mitchell did not seek reelection to the district in the easternmost part of the Lower Peninsula.

Michigan’s 10th Congressional District overlaps with one or more “pivot counties,” or counties with a high proportion of swing voters. The Cook Partisan Voter Index gave the district a score of R+13 in 2018, or 13 percentage points more Republican than the average U.S. House district.

McClain supports a Human Life Amendment to the U.S. Constitution and is also committed to ending taxpayer funding of abortion and abortion providers.

McClain had this to say about abortion on her campaign website: “The most essential duty of government is to defend the life of the innocent. I support judges to the bench who respect traditional family values and the sanctity of human life.”

Kat Cammack prevailed over Democratic challenger Adam Christensen in the general election for Florida’s 3rd Congressional District. Incumbent Rep. Ted Yoho, for whom Cammack had worked, did not seek reelection. Florida’s 3rd District comprises a vast swath of northern Florida, including the liberal college town of Gainesville in Alachua County. It was rated R+9 in the Cook Partisan Voter Index of 2018, or leans Republican.

Cammack is strongly pro-life. Her views on abortion stem from her mother’s own personal decision to keep Cammack during her pregnancy against the advice of her doctors and grandmother.

“When my mom was pregnant with me, the doctors told her because she had had a stroke with my sister that she wouldn’t be able to have children again,” she explained in a video titled “That’s Why”, adding:

So, when she found out she was pregnant, the doctors advised her to abort me. My grandmother advised her—begged and pleaded—to have me aborted. My mom said ‘no.’ So, when given the choice, my mom chose life, and that’s why I’m pro-life.

Cammack had stated she “will always choose life” if she were elected to Congress.

Diana Harshbarger triumphed over Democrat Blair Walsingham and independent Steve Holder in the election for Tennessee’s 1st Congressional District. She will succeed a fellow Republican, Phil Roe, who is retiring after six terms. Tennessee’s 1st Congressional District is situated in the northeastern part of the state, and had a Cook Partisan Voter Index of R+28 in 2018, or strongly Republican.

Harshbarger describes herself as “100% pro-life.” The Susan B. Anthony List’s Musgrave had this to say about her:

Tennessee is a strongly pro-life state and deserves a champion like Diana Harshbarger in Washington. Diana has spent her entire career serving the people of East Tennessee and will be an effective advocate for the most vulnerable in Congress. As a longtime health care professional, she keenly understands that abortion is the opposite of health care.

Mary Miller obliterated her Democratic rival, Erika Weaver, in the election for Illinois’ 15th Congressional District with more than 72% percent of the vote. She succeeds Republican Rep. John Shimkus, who did not seek re-election after serving 12 terms. Illinois’ 15th Congressional District encompasses eastern Illinois and had a Cook Partisan Voter Index of R+21 in 2018, or solid Republican.

Miller is strongly pro-life. Her campaign website promised, “She will OPPOSE efforts to undermine and eliminate the Hyde Amendment, which makes it illegal to use federal funds to pay for abortions” if elected to Congress.

Marjorie Taylor Greene won a seat in the House representing Georgia’s 14th Congressional District. She defeated Democratic candidate Kevin Van Ausdal, who withdrew from the race on Sept. 11. Georgia’s heavily Republican 14th Congressional District, currently vacant, comprises the northwestern corner of the state and had a Cook Partisan Voter Index of R+27 in 2018, or strongly Republican.

Greene is committed to defending the unborn. She had this to say about the issue of abortion on her website: “Every life is precious — period. Unborn children should not be condemned to a painful death for the mere crime of being inconvenient.” She said she would “fight to end abortion on demand by co-sponsoring the Life at Conception Act and stop taxpayer funding of abortion.”

Musgrave of the Susan B. Anthony List had this to say about Spartz: “A Ukrainian immigrant to the United States, Victoria Spartz knows that the American Dream rests first and foremost on the right to life.”

“Victoria is deeply familiar with the importance of valuing every human life, including the lives of the unborn. She stands in stark contrast to her opponent, Christina Hale, an abortion extremist endorsed by both Planned Parenthood and EMILY’s List.”

Spartz has a 100% pro-life voting record in her capacity as Indiana state senator since 2017.