In a huge victory for the campaign of President Donald trump, a Pennsylvania appeals court has ruled that the Trump campaign can monitor the ballot counting in the contested battleground state. Trump campaign observers had previously been pushed away in Philadelphia sometimes as much as 100 feet away, where they were unable to properly observe the fairness and accuracy of the counting.

Justin Clark, Trump 2020 Deputy Campaign Manger and Senior Counsel, responded to the ruling, which he labeled a major victory:

“In a major victory for election integrity, election transparency, all Pennsylvania voters, and the rule of law, the Trump Campaign has prevailed in our suit challenging our Republican poll watchers’ complete lack of any meaningful access to the ballot processing and counting process.

“The eyes of the country are on Pennsylvania, but Pennsylvania Democrats, led by their radical left Secretary of State whose only goal is to steal this election from President Trump, has kept eyes off of the absentee ballot counting process. That ends now in Philadelphia.

“As a result of this incredible legal victory, the lower court’s order has been reversed. Now, according to the Commonwealth Court of Pennsylvania, ‘all candidates, watchers, or candidate representatives’ shall ‘be permitted to be present for the canvassing process’ and ‘be permitted to observe all aspects of the canvassing process within 6 feet, while adhering to all COVID-19 protocols, including, wearing masks and maintaining social distancing.’

“For the good of the nation, every Pennsylvania county should follow the lead of this judge and provide access for observers to ensure transparency and integrity in Pennsylvania. That is the only way to ensure a fair, transparent election in which all Pennsylvania voters can have confidence their vote will count.” 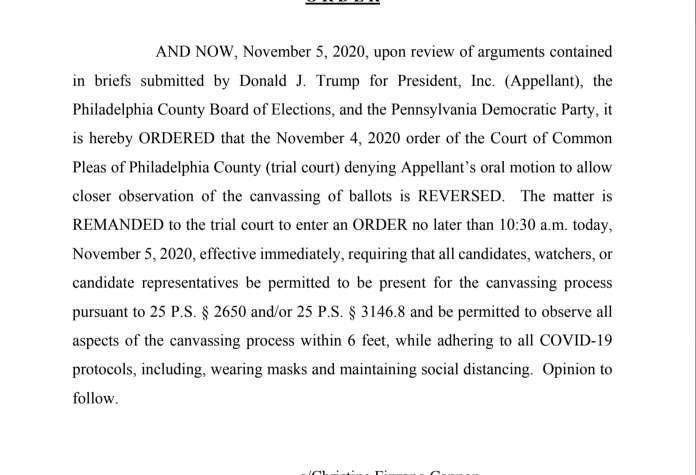 After the ruling, Trump’s campaign team arrived at a vote counting center in Philadelphia to properly observe the process.

Former Florida AG @PamBondi: “We plan on entering that building right now and legally observing the voting process. If there is one illegal vote that is cast, it takes away from the great men and women of Pennsylvania who came out to vote legally.”pic.twitter.com/sM8AC30Z7K

The trump campaign is confident it can hold the state as well as Georgia, North Carolina and Arizona — giving President Trump enough electoral college votes to win the election.

BREAKING: Trump campaign chairman says he is confident President Trump will win, says Trump will win NC, GA, hold on to lead in PA and will win AZ after all ballots counted. 279-259 victory even without MI WI or NV.

Meanwhile, Trump’s presidential campaign has filed another lawsuit in a contested battleground state seeking to ensure the integrity of the presidential election. The Trump campaign’s lawsuit filed to ensure election integrity in Georgia comes after a similar lawsuit in Michigan and legal action in the state of Pennsylvania.

The Trump team wants to ensure that only legal ballots cast on election day are counted so the final vote reflects a fair process that follows the law.

“President Trump and his team are fighting for the good of the nation to uphold the rule of law, and Georgia’s law is very clear: to legally count, mail ballots must be received by 7:00 p.m. on Election Day. That’s still the law, even after Democrats sued earlier this year to extend the deadline and delay Election Day—President Trump and Republicans fought to uphold Georgia law, and we won,” Justin Clark, Deputy Campaign Manager and Senior Counsel said in a statement.

“But today, a Republican poll observer in Georgia witnessed 53 late absentee ballots illegally added to a stack of on-time absentee ballots in Chatham County. We will not allow Democrat election officials to steal this election from President Trump with late, illegal ballots. President Trump and the Georgia Republican Party have filed suit to require all Georgia counties to separate any and all late-arriving ballots from all legally cast ballots to ensure a free, fair election in which only legal, valid ballots count,” he added.

He continued: “We look forward to the court swiftly resolving this issue and to President Trump’s upcoming repeat win in Georgia.”

Yesterday, the Trump campaign filed a lawsuit in the state of Pennsylvania to ensure the integrity of the legal vote counting process there. And in a conference call with reporters, campaign manager Bill Stepien: “We are declaring a victory in Pennsylvania.”

“This is the most important election of our lifetime, and President Trump made clear our path forward last night: ensure the integrity of this election for the good of the nation. Bad things are happening in Pennsylvania. Democrats are scheming to disenfranchise and dilute Republican votes. President Trump and his team are fighting to put a stop to it.

“Pennsylvania’s unhinged, radical left Secretary of State Kathy Boockvar has tried her hardest to bake in a backdoor to victory for Joe Biden with late, illegal ballots in collusion with the partisan state supreme court. The United States Constitution is clear on this issue: the legislature sets the time, place, and manner of elections in America, not state courts or executive officials. As the President has rightly said, the Supreme Court must resolve this crucial contested legal question, so President Trump’s Campaign is moving to intervene in the existing Supreme Court litigation over the Pennsylvania Supreme Court’s unlawful extension of the mail-in ballot receipt deadline. The law is on President Trump’s side: as the Eighth Circuit just said, to change the ballot receipt deadline is in fact a change of the time, place, and manner of the election—and only a state legislature or the United States Congress can do that under the Constitution.

“In addition to the Trump Campaign’s motion to intervene in Pennsylvania Republican Party v. Boockvar, we are taking two additional critical legal actions today to ensure the integrity of Pennsylvania’s election. We are suing to stop Democrat election officials from hiding the ballot counting and processing from our Republican poll observers—observers whose only job is to make sure every valid ballot is counted, and counted once. The eyes of the country are on Pennsylvania, but Pennsylvania has kept eyes off of the absentee ballot counting process all along, and that must stop today. In Philadelphia and elsewhere, Democrat officials forced our observers to stay 25 feet or more from the counting process, leaving no meaningful way whatsoever for our observers to do their jobs. We are also suing to temporarily halt counting until there is meaningful transparency and Republicans can ensure all counting is done above board and by the law.

“The Trump Campaign is also suing to stop Pennsylvania Democrats from breaking the very law that helps America vote—the Help America Vote Act (HAVA). While HAVA requires that states ensure certain first-time voters provide identification in order to vote, Secretary Boockvar—three days ago—re-wrote Pennsylvania Election Code to abuse her unilateral executive fiat and move the deadline for absentee and mail-in voters to provide missing proof of identification well past the deadline. Without our action, Pennsylvanians, and possibly all Americans, may be forced to wait yet another several days for the outcome of the election – all because of the Secretary’s ridiculous eleventh-hour guidance that directly violates the Election Code.

“With these key actions, President Trump is telling all Americans he will do whatever it takes to ensure the integrity of this election for the good of the nation.”

With the outcome of the 2020 presidential election still very much in doubt and recounts, investigations and potential lawsuits likely looming, the head of President Donald trump campaign said yesterday morning he believes the president has a pathway to victory based on their estimation of the remaining battleground states.