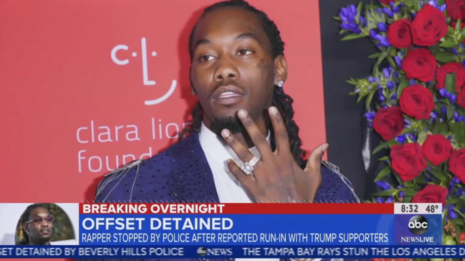 The anti-Trump journalists on ABC’s Good Morning America were peeved Sunday morning, after rapper Offset was detained by Beverly Hills police Saturday. According to a police statement, someone in his vehicle was reported for brandishing a weapon as they drove through a pro-Trump gathering. A passenger in the vehicle was arrested for carrying a concealed and loaded firearm, but the network was miffed anyway and parroted the rapper’s pro-Biden message.

“We’re going to start this half-hour with the rapper Offset being detained and then released by police. That’s after an alleged confrontation with Trump supporters,” announced co-anchor, Dan Harris, as he handed it off to Los Angeles correspondent Zohreen Shah.

After noting that Election Day was just “nine days out,” Shah led into the video portion of her report by noting how things were getting “heated” with pro-Trump people. “Right here in Beverly Hills, rapper Offset allegedly clashing with Trump supporters. His wife, Cardi B hours before documenting pro-Trump demonstrators in the area,” she said.

“The 28-year-old rapper streaming on Instagram Live to roughly 30,000 people when he was stopped by Beverly Hills police,” Shah reported, as if the rapper was the one wrongly treated. She then played these soundbites of the rapper arguing with police and refusing to get out of his vehicle

OFFICER 1: Take your right hand and turn off the engine.

OFFSET: I’m not doing no orders. You have guns out pointed at me, bro.

SHAH: In the video, Offset is seen questioning officers before refusing to step out of his car.

OFFSET: No, you can’t

OFFICER 2: Get out of this car right now.

According to reporting by the U.K.-based Daily Mail, Offset tried to use his clout to get out of the detainment and threatened litigation. “I’m a f—— celebrity, do you know who I am? I’m Offset from Migos,” he’s heard saying in the video. “You told me to put my hands up, I’m not doing that. There’s 25,000 people [watching] on my livestream. You’re gonna get sued publicly.”

Only after showing Offset’s argument with police, did Shah admit to why his vehicle was pulled over: someone was pointing a gun at the Trump supporters. “In a statement, officials say they received information of somebody pointing a weapon at a passerby,” she reluctantly added. “The person gave police ‘a license plate to the vehicle, and the vehicle was stopped by patrol units a short distance away.’”

Without mentioning the rapper’s combative nature with the officers, Shah claimed: “The rapper explaining to officers someone allegedly struck his car with a flag.” Though there was no evidence of that purported incident, Shah showed images of Trump supporters carrying flags and noted Offset’s wife, Cardi B had “[a]lso broadcasted on Instagram live showing pro-Trump demonstrators nearby.”

As she was wrapping up her segment, Shah concluded by reading from a statement put out by Offset’s publicist demanding that people vote for Democratic nominee Joe Biden:

Offset’s publicist releasing a statement overnight, saying in part, that he was detained by Beverly Hills police, quote, “following an attack by aggressive Trump supporters. He was released shortly thereafter. He encourages everyone to get out and vote because nothing changes if nothing changes.”

Meanwhile, a passenger in the rapper’s vehicle, Marcelo Almanzar (Cardi B’s cousin) was arrested by Beverly Hills police for “carrying a concealed weapon and carrying a loaded firearm in public;” as Shah eventually reported.

ABC’s dangerously anti-Trump report was made possible because of lucrative sponsorships from Mercedes-Benz and WeatherTech. Their contact information is linked so you can tell them about the biased news they’re funding.