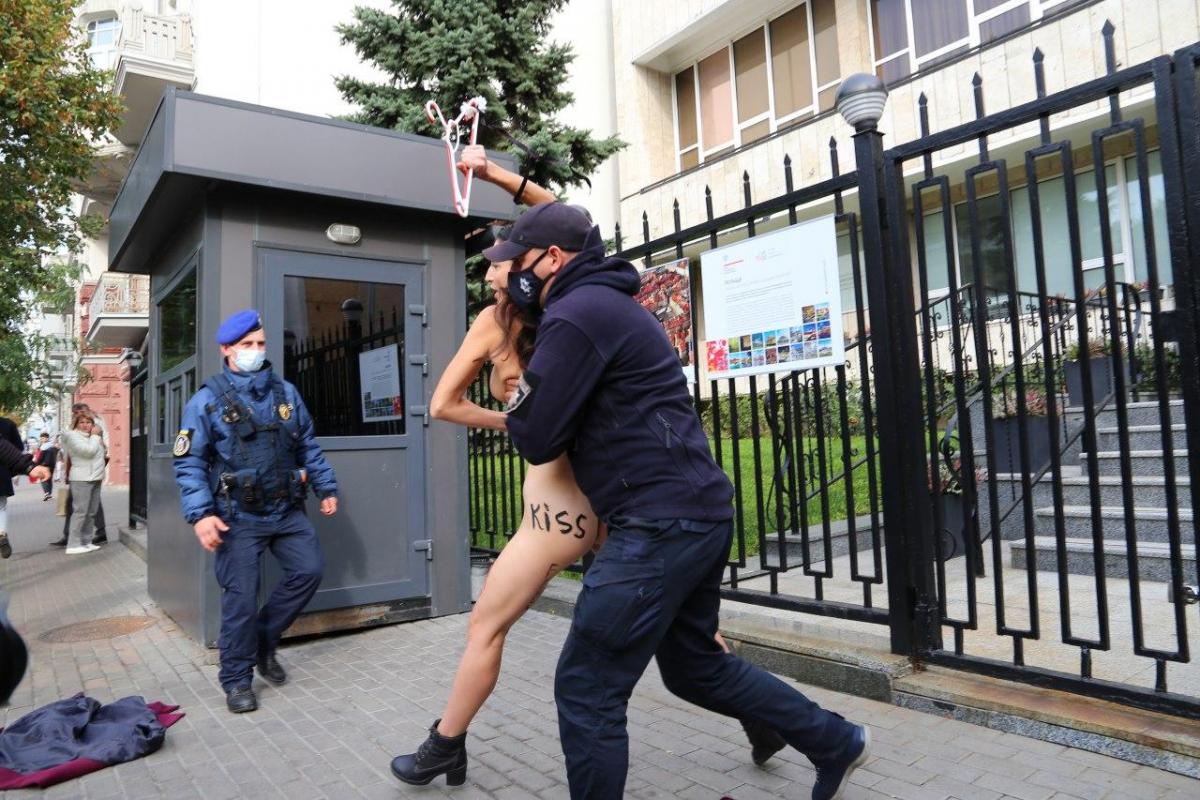 Unian reports the woman is part of the international pro-abortion group Femen, which often stages nude protests to demand the “right” to abort their unborn babies.

On Monday, the unidentified woman stood outside the Polish Embassy in Kiev, Ukraine yelling, “Sisters, to arms!”, according to WIO News. The news reports said the woman had “My body is my choice” and other words written on her body, and she held coat hangers in her mouth.

Police arrested her; however, the news outlets reported other abortion activists gathered at the same spot later in the day to protest the Polish high court decision.

Poland is one of the few countries in Europe that protects unborn babies from abortions in almost all cases.

Poland still allows abortions in cases of rape, incest or threats to the mother’s life.

Pro-life and political leaders celebrated the news as a huge victory for the rights of unborn babies.

“One cannot kill a child for being sick. This is not a fetus, it is a child,” MP Maria Kurowska, of United Poland, told Reuters.

Mikolaj Pawlak, the commissioner for child rights in Poland, also celebrated the ruling.

“The decision of the Constitutional Court declaring eugenic abortion incompatible with the constitution is a victory of life over death,” Pawlak said. “It is a restoration of equal rights for every human being, including those who have not yet been born.”

The ruling could save thousands of babies’ lives. Polish health officials reported 1,100 abortions in 2019, according to the report.

Protests began soon after the ruling was announced, and pro-abortion feminist groups said they are planning more protests for the coming weeks.

The BBC reports police arrested 15 pro-abortion protesters after they began throwing stones Thursday night in Warsaw. The report, along with others from NBC News and the AP, indicate several rioters also were arrested for trying to break through a police blockade outside the home of Deputy Prime Minister Jaroslaw Kaczynski, who is pro-life. Reports say police used pepper spray to quell the rioters.

Abortion activists also broke coronavirus restrictions in Warsaw. The city has a 10-person limit on gatherings, and city police said they fined 35 people for breaking the restriction, the Independent reports.

On Sunday, The Daily Mail reports pro-abortion rioters vandalized churches in several cities across the country. According to AFP, police also detained several pro-abortion protesters for trying to force their way into a church in Warsaw.

In the city of Poznan, dozens of pro-abortion protesters did break into a church and disrupt a service, shouting, “We’ve had enough!” and “Barbarians!” as they held signs up in front of the altar, the Mail reports.