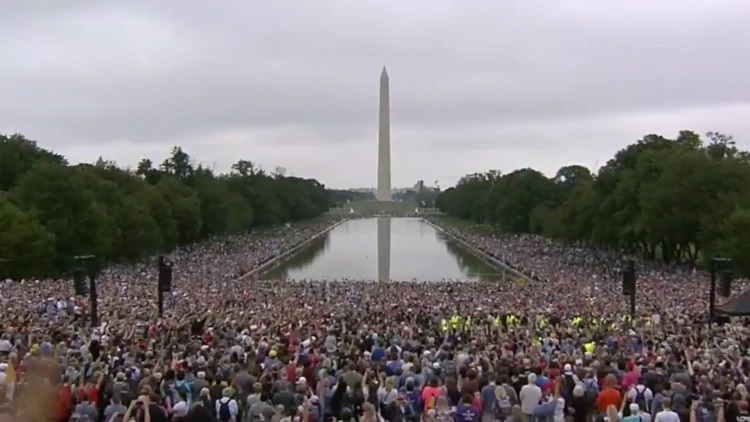 Nearly 15,000 people are expected to gather Sunday in Washington, D.C. for a “worship protest” against restrictions on religious gatherings, NBC News reported.

Sean Feucht, a singer and former Republican congressional candidate, will host the event as the final stop in his “Let Us Worship” tour, which has taken the Evangelical singer across America, according to NBC.

Feucht began hosting the “worship protests” after Seattle officials denied his permit to hold an event in September. He wrote an op-ed in The Federalist about why he was holding the protests, criticizing the suppression of religious freedom in many cities with strict gathering limits.

“In unprecedented acts of government-authorised injustice, Christians are being told they cannot gather for worship, they cannot sing songs of praise, and they cannot observe church ordinances,” he wrote.

“In major cities across America, godless politicians are adopting tactics that more closely resemble those of jihadist ayatollahs than men and women who are sworn to uphold the rule of law.”

Public health officials have raised their concerns about the events because of the large number of people gathering. Feucht has a permit from the National Park Service for the Sunday event, and it lists a coronavirus mitigation plan that includes masks and gloves for crew, sanitization stations, and “a sign placed at the table where we will give away Bibles,” according to the Independent.

But the National Park Service will not require nor enforce the use of masks or social distancing, although it “strongly encourages” these measures.

“[The National Park Service] reserves the right to immediately revoke this permit at any time should it responsibly appear that the public gathering presents a clear and present danger to public safety, good order or health, or if any conditions of this permit are violated,” the final permit says, according to the Independent.

Lawrence Gostin, a professor of global health law at Georgetown University who advises the World Health Organisation, told the Daily Beast that the event is “disgraceful” and will “almost certainly” lead to a superspreader event.

Nashville officials also vowed to issue “appropriate penalties” against Feucht over his event in the state earlier in October for breaking local coronavirus guidelines.