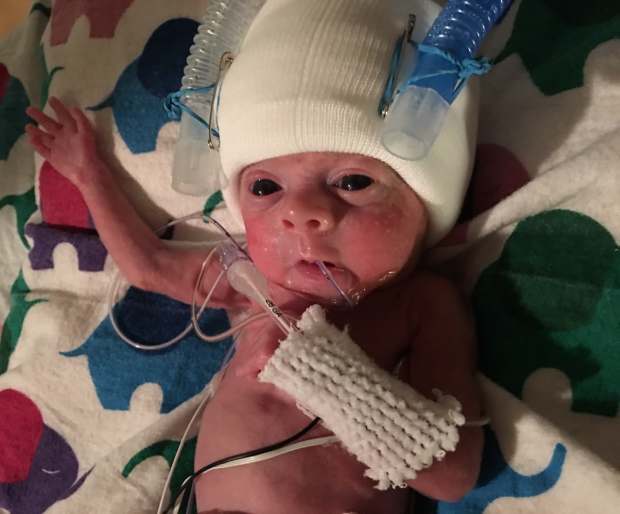 The Irish Sun reports the Oregon boy, now 4, was born at 23 weeks of pregnancy in 2016. He overcame pregnancy complications, brain bleeds, infections and surgeries; and today, he is thriving.

“He’s just an incredible little boy,” his father, Rob, said. “A lot of these babies born at 23 weeks have tons of health problems but Logan just didn’t, thank God. He’s a smart little kid, my little boy. He really is.”

His mother, Val, said she began to suspect something was wrong when she was about 21 weeks pregnant with Logan. A visit to the doctor confirmed her suspicions: She was diagnosed with an incompetent cervix, according to the report.

She said doctors warned her that she could lose the baby and asked her to go home, but she refused.

“Both Rob and I looked at the doctor and said, ‘We’re not going anywhere, whether we have him tomorrow or have him four months from now, we’re staying in the hospital,’” she remembered.

For the next 20 days, she said she laid in a hospital bed with her feet propped up and her head down. She said she never left the bed, hoping it would be enough to save her son’s life.

Remembering his wife’s sacrifice, Rob said: “To be honest, she’s incredible. I didn’t realize how strong my wife was until I saw her lie in that bed like that upside down all those days.”

The family’s fears about losing their son did not go away. Logan had two brain bleeds, a urinary tract infection, an inguinal hernia and two holes in his heart, according to the report. There were several times when his parents thought he might die, but each time he pulled through.

“The doctor would look at me and say ‘we will see how he does’ and I’d just keep saying ‘he’s a tough guy’!” his mother said.

After 105 days in the hospital, his parents said Logan finally was well enough to go home.

Four years later, the Rays said Logan does not have any health problems; he is a normal 4-year-old boy.

The chance of survival for premature babies is growing. A recent study in the New England Journal of Medicine found that a growing percent of premature infants are surviving at 22 weeks of pregnancy. This and other research recently prompted the British Association of Medicine to issue new guidelines encouraging medical treatment for babies born at 22 weeks of pregnancy. Previously, the guidelines did not recommend treatment until 24 weeks.

However, in the UK and many parts of the United States, unborn babies can be aborted for any reason up to 24 weeks – or even later in Oregon.