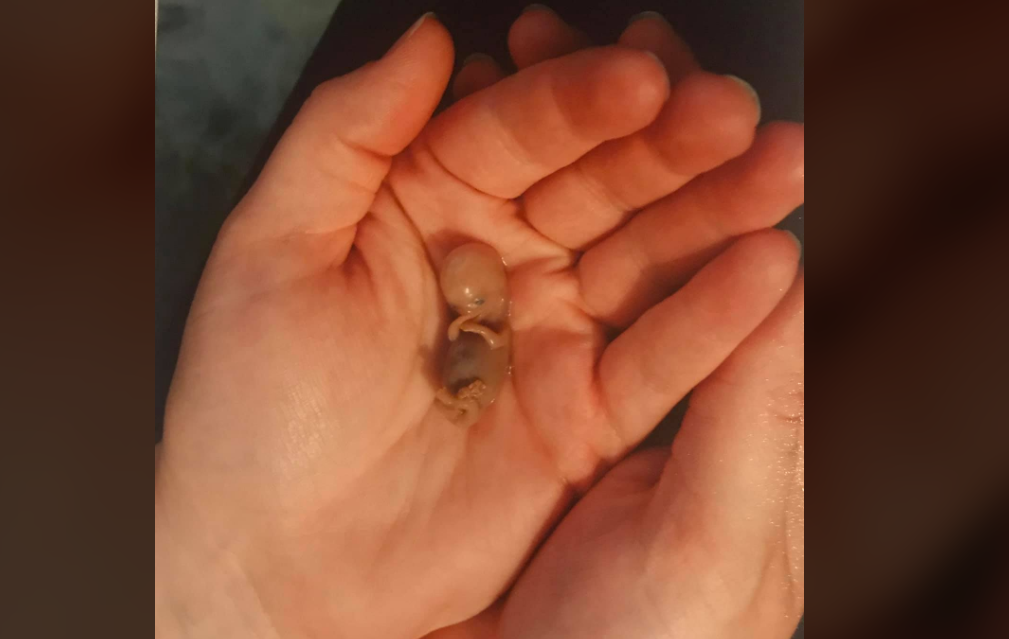 Photos of a tiny baby who was miscarried at 10 weeks of pregnancy are serving as a witness to the value of every human life on Facebook.

“Although she was born far too early (April 1, 2006) due to health issues (possibly spina bifida or gastroschisis), she was still perfectly whole,” Plunkett wrote.

She said her daughter’s due date was exactly 14 years ago. The photos show her unborn daughter’s fingers and toes, her eyes, ears, nose and mouth.

“I feel like this is an incredible time to bring up the fact that anyone looking at this photo can easily tell this IS a baby,” Plunkett wrote. “This is what any baby would resemble at only 10 weeks. 10 fingers, 10 toes, eyes, ears and nose.”

By 10 weeks of pregnancy, unborn babies already are incredibly developed. Their hearts have been beating for at least a month, and their brain waves are detectable, according to the Endowment for Human Development.

“By 9 weeks the hands move, the neck turns, and hiccups begin. Girls now have ovaries and boys have testes,” the endowment states. “By 10 weeks kidneys begin to produce and release urine, and intermittent breathing motions begin. … The hands and feet move frequently and most embryos show the first signs of right- or left-handedness.”

Plunkett said she also wanted to raise awareness about the humanity of unborn babies because of what is at stake in the upcoming election.

Biden not only has promised to keep abortions legal without restriction. He also said he wants to force taxpayers to pay for them.

Abortions destroy more than 800,000 unborn babies’ lives every year in the United States. Most abortions occur in the first trimester, before babies are fully developed and viable outside the womb. None of this, however, makes them any less valuable. From the moment of conception, unborn babies are unique, living human beings with their own separate DNA. By the time most women find out that they are pregnant, their unborn babies already have heartbeats.