Who would envision living in a time where an American athlete could be suspended from his team’s competition for supporting his country’s duly-elected president? Well we don’t have to imagine it. This week professional American cyclist Quinn Simmons was sidelined from competition for disagreeing with a journalist’s negative appraisal of President Donald Trump.

Fox News reported that Simmons, a member of U.S. professional road cycling race team “Trek Segafredo,” was suspended by his team for what they called “divisive” tweets in support of President Trump.

Readers might wonder, “Ugh, what pro-Trump white supremacist group did Simmons unknowingly retweet this time?” because that’s what the dramatic “Trek-Segafredo” reaction made it sound like he did. But really, Simmons got the boot for disagreeing with some Dutch sports journo’s aggressive tweets against Trump.

On September 30, Dutch journalist Jose Been composed an actual divisive tweet (since-deleted) promoting hate and outrage for Trump and his supporters. She wrote, “My dear American friends, I hope this horrible presidency ends for you, and for us as (former?) allies too.”

Been then followed with an even worse sentiment, saying, “If you follow me and support Trump, you can go. There is zero excuse to follow or vote for the vile, horrible man.” Man, Simmons must have matched that anger or said something even worse than that to have been suspended, but all he did was respond with a blithe “Bye” and a hand-waving emoji.

You mean Simmons wasn’t rattled by a journalist’s opinion? Someone get the cycling team to circle those aerodynamic, lightweight biking Burleys.

One user responded to Simmons’ “Bye,” saying, “Apparently a Trumper.” Simmons proudly tweeted back, “That’s right” with an American flag picture on the end of it.

Another condescending user tore into Simmons for his evil, evil response to Been’s tweet, writing, “I like talented young bike racers as much as anyone, but I refused to cheer for anyone who supports a racist, hateful fascist like @QuinnSimmons9 does. I am officially rooting for everyone else.”

Again, an unfazed Simmons wrote back sarcastically, “what a loss” — apparently the straw that broke the camel’s back. Fox reported that Trek-Segafredo had suspended Simmons from competition “until further notice.”

In a statement the U.S. cycling team claimed, “Regrettably, team rider Quinn Simmons made statements online that we feel are divisive, incendiary, and detrimental to the team, professional cycling, its fans, and the positive future we hope to help create for the sport.” Yeah well the only reason it’s controversial for the team is because the “positive future” they’re envisioning can’t exist with Donald Trump in it.

But what? That future is secured by stomping out their athletes who have different political opinions? How can a professional biking team remain highly competitive while putting ideology over athleticism? Also, how were the lovely Dutch journo’s comments not “divisive?” And how is “Bye,” or “That’s right” in response to being called a Trumper “incendiary.” It’s disgusting that a U.S. team would do this to an American athlete defending his valid views from jerks on Twitter.

Again, Trump is president. Get over it! 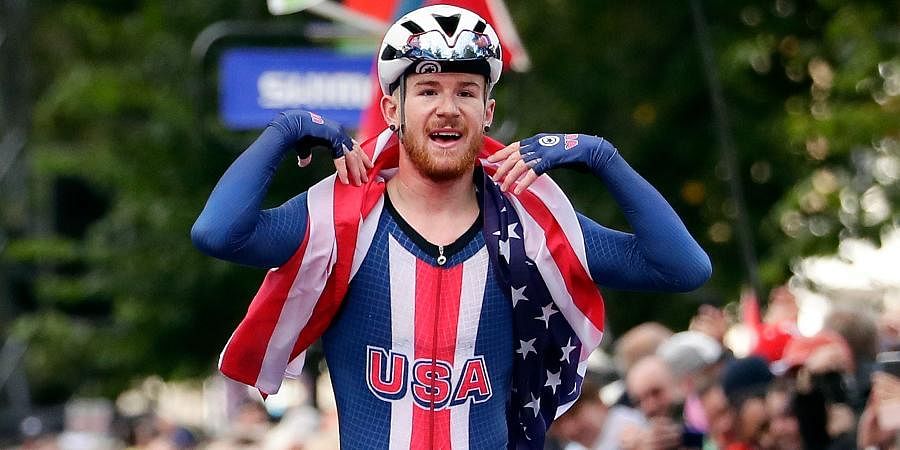