Twitter CEO Jack Dorsey’s leftist philanthropy has surfaced to the front of a Twitter uproar involving a professor who went on a racially-charged rant to viciously attack U.S. Supreme Court nominee Judge Amy Coney Barrett and her family.

Boston University (BU) Professor and CBS News correspondent Ibram X. Kendi addressed the news that a “conservative Catholic and yes, white, justice would be President Trump’s pick” by comparing her to a “white colonizer” on Twitter. The reason? Barrett had adopted two children from Haiti. He launched racially-charged venom at Barrett and her family: “Some White colonizers ‘adopted’ Black children. They ‘civilized’ these ‘savage’ children in the ‘superior’ ways of White people, while using them as props in their lifelong pictures of denial, while cutting the biological parents of these children out of the picture of humanity.”

In August, Dorsey had tweeted that he was donating $10 million to Kendi and the Center for Antiracist Research at BU, which Kendi founded and is listed as director. Reporting from university news outlet BU Today confirmed that Dorsey followed through with the donation. 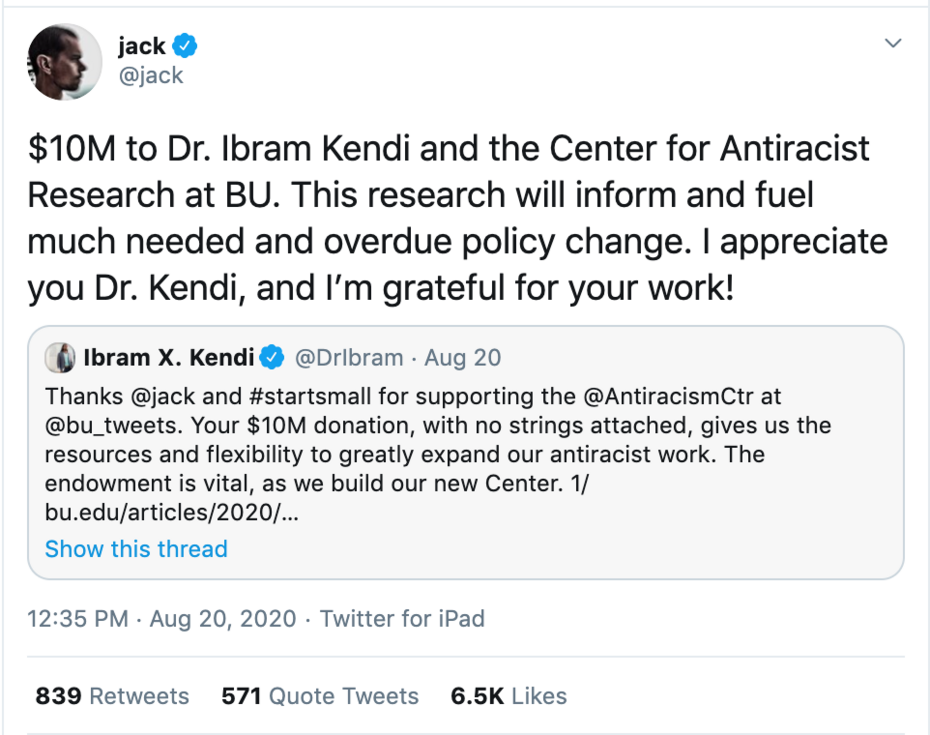 Kendi’s tweet received significant backlash, and he had to quickly hedge himself by attacking white people more generally: “And whether this is Barrett or not is not the point. It is a belief too many White people have: if they have or adopt a child of color, then they can’t be racist.”

It’s no question that Dorsey’s online platform has become a haven for leftist ideology, and a hub for censorship against users who disagree with its preferred line of thinking.

In late August, Twitter had refused to remove a threat by Black Lives Matter Activist Shaun King to randomly name officers in the Kenosha, Wisconsin Police Department if it did not comply with demands to identify the officer that shot Jacob Blake. The New York Post had reported August 26, that “A Twitter spokesman says activist and accused fraudster Shaun King’s threat to name Kenosha, Wisc., police officers is ‘not in violation’ of its rules — including its ban on ‘a threat of harm against an identifiable group,’ a rule used to censor President Trump.”

Also in August, Dorsey had been exposed for following an anti-Trump radical activist doxxer on Twitter who was “soliciting the public for identifying information of those who participated in the peaceful ‘Trump Boat Parades’ that took place across several US states over the weekend,” according to The Post Millennial.

This latest resurfacing of Dorsey’s antics funding leftist causes with millions is just par for the course for the progressive platform owner. In May, reporting showed that Dorsey had donated $5 million to push socialist universal basic income.

Conservatives are under attack. Contact Twitter’s leadership at (415) 222-9670 or by tweeting at the official @Twitter account, @TwitterSafety, or Twitter’s CEO Jack Dorsey @Jack and demand that Twitter stop gaslighting for the left. Instead, Big Tech should be held to account to mirror the First Amendment while providing transparency, clarity on “hate speech” and equal footing for conservatives. If you have been censored, contact us at the Media Research Center contact form to be included in our database, and help us hold Big Tech accountable.