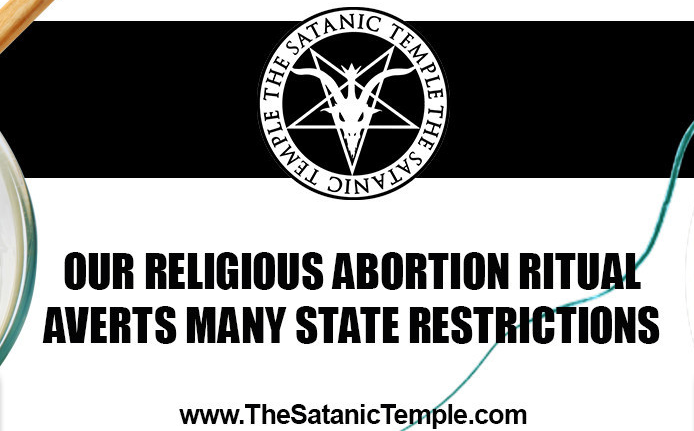 After declaring abortion a “religious ritual” earlier this year, The Satanic Temple is suing an advertising company for refusing to place its pro-abortion billboards in Arkansas and Indiana.

On Monday, the Satanic group announced its lawsuit against Lamar Billboard Company, accusing it of religious discrimination and a breach of contract.

The Satanic Temple said it wants to put up eight billboards that advertise its “abortion ritual” near pro-life pregnancy centers in Indiana and Arkansas.

One billboard declares “Abortions save lives!” as well as “Our religious abortion ritual averts many state restrictions.”

A second billboard shows an image of a mixing bowl with cake batter next to another image of a human sperm about to fertilize an egg. The words “Not a cake” and “Not a baby” are next to the images. The comparison actually is laughable because no one thinks that an unfertilized egg is a baby. It is once the sperm fertilizes the egg that a unique, living human being is conceived, and that is when the problem with abortion starts.

Both billboards also include the pro-abortion group’s website and an image of Satan inside a black star.

According to the Satanic group, the company rejected its ad designs for being “misleading and offensive.” Its contract with Lamar states that the company may reject a billboard that is not “in good taste and in line with the moral standards of the individual communities in which it is to be displayed,” the group continued.

However, the Satanic Temple claimed the company discriminated against it because of its religious beliefs.

“TST expressed willingness to update its designs. However, Lamar refused to specify any component that they believe is problematic, so it was not possible for TST to offer revisions,” the group said in a statement. “Additionally, TST claims Lamar acted in bad faith and has deprived TST of the ability to advertise its religious abortion ritual as it holds a monopoly over much of the US billboard market.”

In August, The Satanic Temple admitted proudly that, in its belief system, killing an unborn baby in an abortion is a religious ritual similar to communion or baptism for Christians. The disturbing announcement is part of the cult’s new plan to overturn pro-life laws using a religious freedom argument.

“Many states have laws that interfere with our members’ ability to practice their religious beliefs,” said Satanic Temple spokesperson Jane Essex at the time. “No Christian would accept a mandatory waiting period before they can partake in communion. No Christian would tolerate a law that insists state counseling is necessary before someone can be baptized. Our members are justly entitled to religious liberty in order to practice our rituals as well.”

It claims its abortion ritual is a “spiritual experience designed to instill confidence and self-worth in accordance to TST’s religious beliefs.”

The pro-abortion group also raffled off a free abortion to raise money for its campaign.

For years, the Satanic Temple has been suing to overturn pro-life state laws, but so far all of its efforts have failed. In June, a federal appeals court rejected its latest attempt at challenging Missouri’s informed consent law. In 2019, the Missouri Supreme Court dismissed another one of the Satanic Temple’s lawsuits.

But every time it loses, it tries again with a new approach. Its new plan is to challenge pro-life laws based on the Religious Freedom Restoration Act (RFRA), which ensures the government does not unnecessarily interfere with people’s religious freedom.

The Satanic Temple is heavily involved in abortion activism in the U.S. Breitbart once described its work as a “pro-abortion crusade to come to the aid of America’s largest abortion provider,” Planned Parenthood.

Years ago, former satanist Zachary King told the Lepanto Institute that the cult performs satanic rituals inside abortion facilities. King said participating in abortions is particularly important for satanists because it is considered the best way to give an offering to Satan.