Pregnant Mom Diagnosed With Cancer Refuses Abortion, She and Her Baby Survive 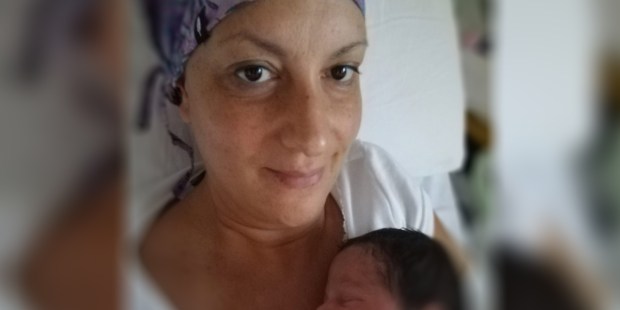 Consiglia Varriale was willing to sacrifice her life for her unborn daughter when doctors diagnosed her with breast cancer earlier this year.

Though her doctors advised her to have an abortion, Varriale could not bear the thought of ending her daughter’s life, Aleteia reports.

The 42-year-old from Quarto, Italy chose life for her daughter, Aurora, and today both mother and daughter are doing well, according to the report.

Varriale said she was diagnosed with breast cancer when she was three months pregnant with her second daughter. And, as often happens in such cases, her doctors recommended that she have an abortion so that she could begin cancer treatments, the report states.

“I was too happy at the thought of that pregnancy,” she told the Italian publication Il Riformista. “I would never, ever decide to terminate it. My husband was worried about my health, and indeed still is. But faced with my enthusiasm, my serenity, and my optimism, he necessarily had to give in and support my choice.”

Varriale and her husband found renewed hope at the Pascale Institute in Naples. There, Dr. Michelino de Laurentiis reassured them that many cancer patients have received successful treatments while pregnant, the report continues.

So, during the coronavirus shutdowns, she began chemotherapy. Varriale said watching her daughter continue to grow and thrive in her womb gave her strength.

On Sept. 15, she gave birth to a healthy baby girl and, according to the report, her cancer treatments have been successful so far.

“I followed only my heart. They all told me that I had to give up the baby if I wanted to go on living. Now I know that I have made just one mistake: I did not rely immediately on the doctors of the Pascale (Institute),” Varriale said.

Her story of courage and self sacrifice is a beautiful one, and there are many others like it. LifeNews has reported numerous stories about mothers who chose life for their unborn babies after being diagnosed with cancer. Most of the mothers survived the cancer, while a few sacrificed their lives for their babies.

New research provides growing hope for mothers in these difficult situations. In 2012, a collection of stories from The Lancet demonstrated that pregnant women do not need to have an abortion to get treatment for cancer. Similarly, a 2015 study in the New England Journal of Medicine found chemotherapy may not impair unborn babies’ general development.