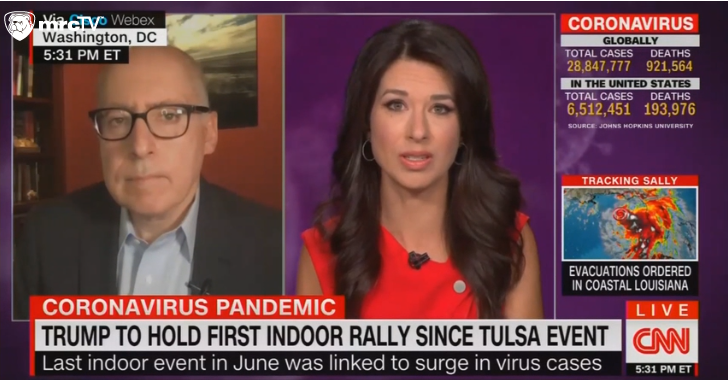 On Sunday evening’s CNN Newsroom, host Ana Cabrera conspired with medical analyst Dr. Jonathan Reiner to make insane accusations towards President Trump in response to his rally in Las Vegas. The deranged doctor accused Trump of “negligent homicide” because the rally will cause “the death of others.”

Seeing as how Cabrera didn’t push back on this and thus gave her silent approval of such vile rhetoric, this allowed Reiner to restate this on Monday morning during New Day (and covered here by NewsBusters contributing editor Mark Finkelstein).

Cabrera began the segment with a nasty, unverified attack on Trump by blaming his Tulsa rally for the death of Herman Cain:

This will be the first Trump rally held completely indoors since the one he held in Tulsa, Oklahoma back in June. Now, Tulsa’s top health official linked that rally to a surge in cases there. Here you can see a clear uptick in Tulsa’s cases nearly two weeks after Trump’s rally. You’ll also recall former Republican presidential candidate Herman Cain tested positive just days after he attended that rally. He later died.

The ghoulish leftists at CNN sure do love exploiting the death of Cain to dunk on Trump even though there is no evidence that he contracted COVID at the rally. Furthermore, CDC data shows that there was no spike in cases due to the Tulsa rally. But who cares about the facts if you are attempting to politicize a virus to help your political party?

Cabrera then enthusiastically set up Reiner to go on his psychotic rant:

CABRERA: Dr. Reiner, I remember talking with you before the Tulsa rally and you were very concerned. You called it criminal endangerment. Now at that time, the U.S. had 2.2 million cases and 119,000 deaths. Today, we have more than six million cases and 193,000 deaths. So if holding an indoor rally in June was criminal endangerment, what is it now?

REINER: Negligent homicide. What else could you call an act that because of its negligence results in the death of others? If you have a masked gathering now in the United States, in a place like Nevada or just about any other place, with hundreds of thousands of people, people will get infected and some of those people will die. There’s been a lot of talk over the last week about whether the President played down the risks of this virus to his followers and the country as a whole and you have to just look at what’s going on now to understand that. If — if you took this virus seriously, you would never hold an indoor rally or almost any rally now and particularly one that doesn’t enforce very strict rules on– on masks. People will die as a consequence of this. I think Nevada has a law right now limiting gatherings to more than 50 people so the President is just defying that. Makes no sense.

Ah yes, the completely non-political Reiner who claimed that it was unsafe for people to go outside in May in response to Trump saying it was safe. He would never ignore science to launch nasty, partisan attacks.

CABRERA: So just to clear, for people who may be watching — who may be considering going to this rally tonight perhaps, you believe —

CABRERA: — people will die because they attend this rally tonight?

Sure, the virus with a 0.26 percent death rate is guaranteed to kill people. This isn’t fear mongering or Democratic propaganda.

CNN has an election to win for the Democrats which means exploiting a pandemic to own Trump.

This Democratic propaganda was brought to viewers by Grubhub and Land Rover. Let them know here if you think they should be sponsoring this content.