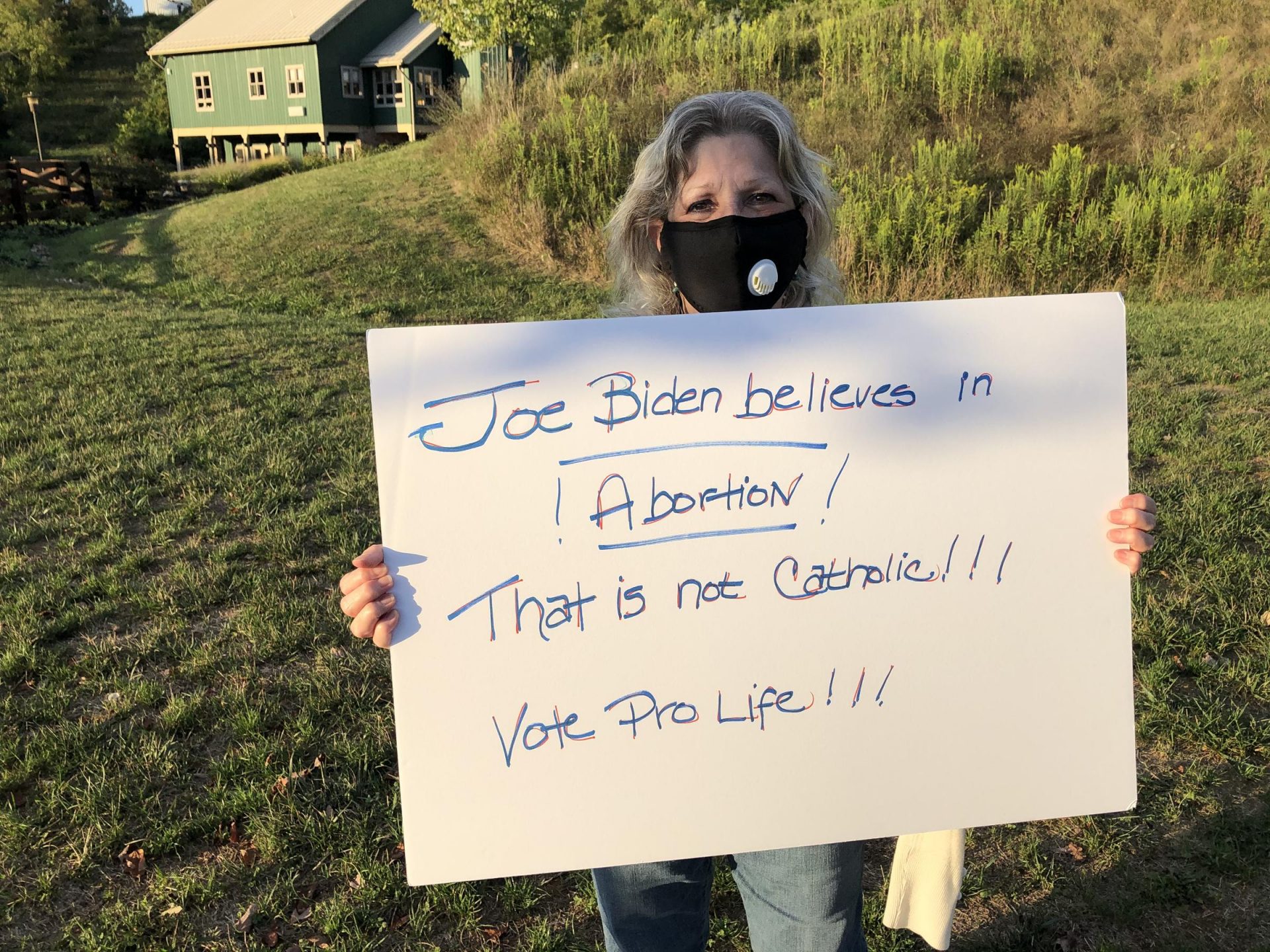 Pro-life advocates in Pennsylvania protested a “Catholics4Biden” event recently, calling out the Democrat presidential candidate for supporting abortion on demand and promising to force taxpayers to fund it.

WITF described the protest in southwestern Pennsylvania as a sign of a growing disconnect between Democrat candidates and Catholic voters.

Anita Thiess, a former Democrat from Butler County, said she joined the protest because she cannot vote for someone who supports killing unborn babies in abortions.

“The only reason I will not vote for Joe Biden is because he says he’s Catholic but he’s pro-abortion,” she said, according to the local news. “You cannot change the basic fundamentals of the Catholic faith – it teaches you ‘Thou shalt not kill.’ Period.”

Thiess said she plans to vote for President Donald Trump, and she is encouraging other Catholics to vote for him, too.

“God bless him, but he’s not presidential many times,” she said. “In fact, he acts really like a jerk many times! But when it comes to the babies being killed, he is totally on board.”

Trump won Pennsylvania in 2016 in a surprise upset against pro-abortion Democrat Hillary Clinton. The Republican president won 52 percent of Catholic voters to Clinton’s 44 percent, according to the Pew Research Center.

Biden says he is a devout Catholic, and lately his campaign has been working hard to court religious voters. But Biden’s claims to faith do not match his political positions especially on abortion and religious freedom. He supports abortions “under any circumstances” and wants to force taxpayers to pay for them in clear violation of Catholic Church teachings about the sanctity of life.

Polls consistently show that most Americans oppose abortion on demand and taxpayer-funded abortions, and they are more likely to vote for candidates who support limits on abortion, too. This means trouble for Biden and other Democrats.

The challenges were apparent at a “Catholics4Biden” event late last month, when [pro-abortion Democrat] U.S. Rep. Conor Lamb tried to tell attendees how his Catholic faith shapes his work to protect health care and stand up for refugees. But his remarks were punctuated by a group of nearby protesters who called him a “heretic” and “apostate.”

“Because of you, those of you who sent a Democratic majority to Congress…can be proud of several actual works, specific things that we have stepped forward and voted and done to try and help the most vulnerable in our society,” said the Democrat.

Last year, Biden announced that he no longer supports the Hyde Amendment, which prohibits taxpayer-funded elective abortions in Medicaid and other programs. Popular among Americans, the amendment has saved more than 2.4 million unborn babies from abortions, according to research by Charlotte Lozier Institute. If ended, about 60,000 more unborn babies could be aborted every year in the U.S. alone.

In March, Biden said one of his first acts as president would be to restore funding to Planned Parenthood, the largest abortion chain in America.

Biden even has called abortions an “essential medical service” – as if slaughtering a unique, irreplaceable human child inside his/her mother’s womb is something good.

Most Americans disagree. Earlier this summer, Gallup found 55 percent of all Americans take a pro-life position on abortion, wanting all (21 percent) or almost all (39 percent) abortions made illegal.