Despite how woke the House of Mouse likes to come off here in the United States, the “family-friendly” media empire dances a different routine for their masters in Beijing. Their latest dance, though, is particularly offensive as it involves the film company giving special thanks to government agencies in China that are linked to the detention and possible genocide of Chinese Uighurs in China’s Xinjiang Province.

According to NBCNews.com “Disney is facing backlash after the final credits for its latest film Mulan thanked government entities in Xinjiang, the province where Muslims have faced human rights abuses.”

Apparently Disney had been given access to locations in China’s Xinjiang Province, “where Beijing is accused of detaining more than 1 million Uighur Muslims.” The treatment of the Uyghurs, who have been persecuted by the Chinese government for their religious and cultural differences, has been considered by many in the U.S. as a “genocide.” The Trump administration has even been discussing whether or not to “formally label” what’s happening to the Uighurs as a “genocide.”

Recent footage from mainland China depicts Uighurs being rounded up and boarded onto trains to be transported to “re-education camps.” It’s a potential geopolitical disaster of epic proportions and Disney seems to be shaking hands with some of the people making it possible.

NBCNews.com wrote how some eagle-eyed Disney+ viewers (where Mulan debuted on September 4) found a “special thanks” in the movie’s end credits directed from the film crew to “eight government entities in Xinjiang,” including the “public security bureau in the city of Turpan, where the country is allegedly operating more than a dozen ‘reeducation’ camps.”

Jeannette Ng, one of the first users to identify the problematic thank yous, tweeted on September 6, “Mulan specifically thank the publicity department of CPC Xinjiang uyghur autonomous region committee in the credits. You know, the place where the cultural genocide is happening.” 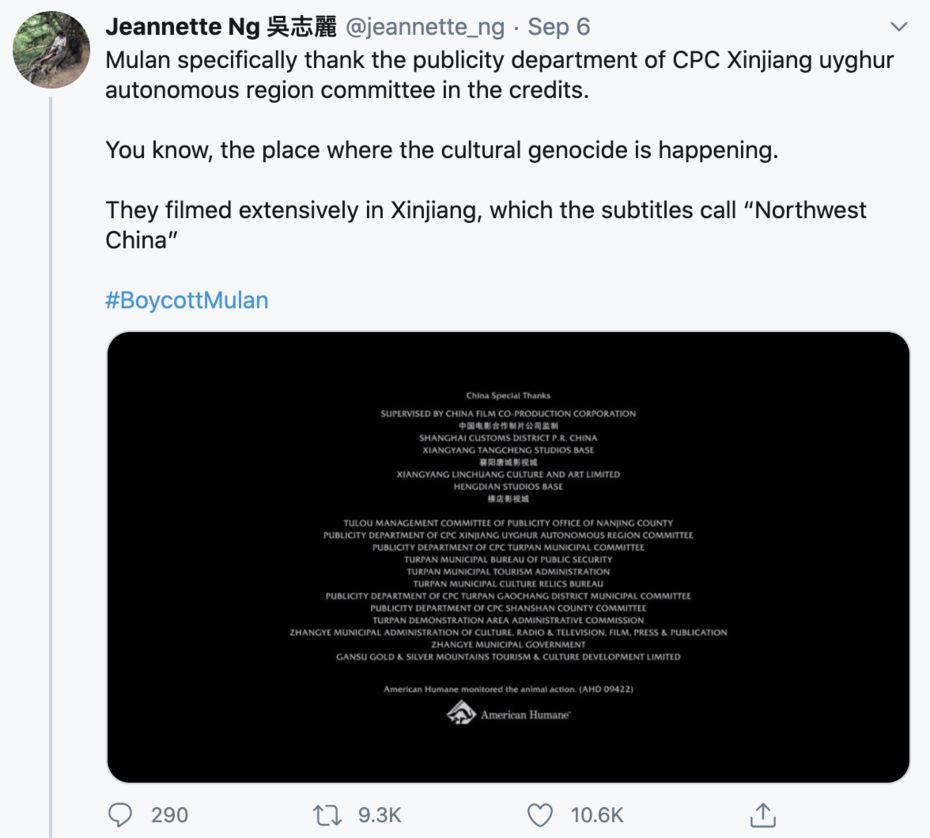 For the last couple of years, it’s been apparent that giant Hollywood companies including Disney have been trying to cultivate an audience in the Chinese Box office, which is the second largest film industry behind only America’s. Of course, it’s been frustrating to see American films alter or censor themselves according to the dictates of the regressive and anti-freedom Communist government, especially when Disney and other Hollywood studios tend to lecture domestic audiences with woke, left-wing messages.

For example, Disney threatened to pull out of filming in Georgia in 2019 over the state’s anti-abortion “heartbeat bill” but they have no problem filming where genocide may be occurring in China. Seems like the only political stance they’re tacitly taking is dehumanizing minority groups, whether that’s the Uighurs or the unborn.