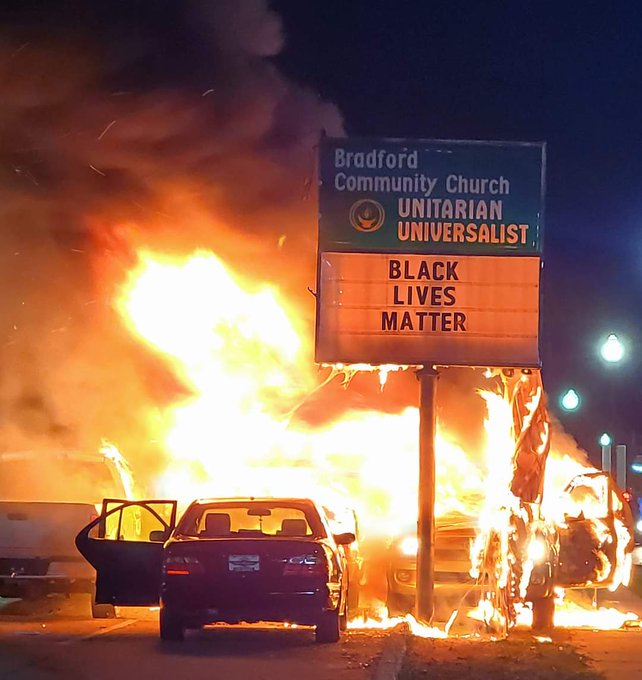 A church was damaged by a fire during the anti-police riots that broke out Sunday and continued into Tuesday in Kenosha, Wisconsin.

The Milwaukee Journal Sentinel reports a fire spread to the Bradford Community Church, a Unitarian Universalist congregation, around 3 a.m. Monday. On the church sign was the phrase “Black Lives Matter.”

Two men who were livestreaming the riots online “attempted to alert anyone inside the building but received no response, then tried to smother some of the flames using shoves while flagging down a lone fire truck that had arrived near the car dealership,” according to the report.

The Kenosha News reports the church building appears not to have been severely damaged, but the sign outside was melted by the fire. The church, built in 1907, is recognized on the National Register of Historic Places.

The fire occurred during riots protesting police brutality after city police shot a black man named Jacob Blake in response to a domestic violence call over the weekend, according to the Daily Wire. Rioters destroyed buildings and businesses and seriously injured at least one police officer.

The fire that damaged the church reportedly spread from a car dealership next door.

In a statement Monday online, the Rev. Erik David Carlson said he feels relieved that the damage was minimal.

“We, the members and clergy of Bradford Community Church Unitarian Universalist, are outraged at the violence perpetuated in the name of law enforcement on our people of color throughout our nation’s history and yesterday in Kenosha in the case of Jacob Blake for whose life we now pray,” Carlson said.

“Despite the fact that we cannot condone violent response to injustice, we understand and appreciate the anger and frustration that fueled the events of last night,” the pastor continued. “While we are relieved that our church home mostly survived the inferno in the lot next door, we affirm that we would rather lose 100 buildings than one more life to police violence.”

Other properties that were damaged or destroyed in the riots included a mattress store, Mexican restaurant and car dealership as well as a probation and parole office, according to the New York Times.