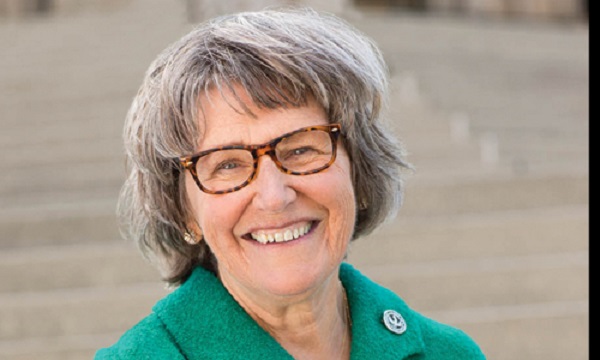 A nun who once praised a prominent abortion activist for celebrating her abortion has been invited to speak at the Democratic National Convention this week.

Sister Simone Campbell, who Breitbart describes as a “social justice warrior and lobbyist,” is the executive director of the NETWORK Lobby for Catholic Social Justice. Her invitation to the DNC comes as the party tries desperately to win over religious voters for Joe Biden while maintaining its radical pro-abortion stance.

Campbell also spoke at the Democratic National Conventions in 2012 and 2016, according to CNA. In 2016, she praised abortion activist Ilyse Hogue of NARAL for sharing on the convention stage how she aborted her unborn baby, the report states.

“From my perspective, I don’t think it’s a good policy to outlaw abortion,” Campbell told Democracy Now at the time. She said society should “focus on economic development for women and economic opportunity. That’s what really makes the change.”

Sister Campbell organized the 2012 “Nuns on the Bus” tour through her Network organization, which sought to promote social justice issues while downplaying the importance of abortion. “At times Nuns on the Bus can seem like Campbell’s personal act of retaliation against the Vatican for its virtual takeover of the nuns’ leadership conference and its rebuke of Network,” Time magazine declared in a profile of Sister Simone.

Biden and the DNC are trying to appeal to Catholic voters, but their stances on abortion and religious freedom are turning many away.

Biden supports abortions on demand and wants to force taxpayers to fund them. His running mate is even more radical; Kamala Harris recently opposed a bill to protect newborns from infanticide and prosecuted an undercover journalist who exposed Planned Parenthood’s aborted baby body parts trade.

Though Biden claims to be a devout Catholic, both he and the Democratic Party call abortions “health care.” In April, he went so far as to call the aborting of unborn babies an “essential medical service” during the coronavirus pandemic. In truth, almost all abortions are elective, and they destroy the lives of unique, living human beings in their mothers’ wombs.

Religious voters also are concerned about Biden’s and Harris’s record on religious freedom. Recently, Biden promised to end Trump’s religious freedom rule for nuns and other religious individuals who oppose an Obamacare mandate that requires them to fund contraception that may cause abortions. Harris also recently came under fire for discriminating against a judicial nominee simply because he is a member of a Catholic fraternal organization.

Catholic leaders have been clear that Catholics cannot support the killing of unborn babies in abortions. The U.S. Conference of Catholic Bishops recently urged Catholics to oppose abortion as a “preeminent priority” when they vote.