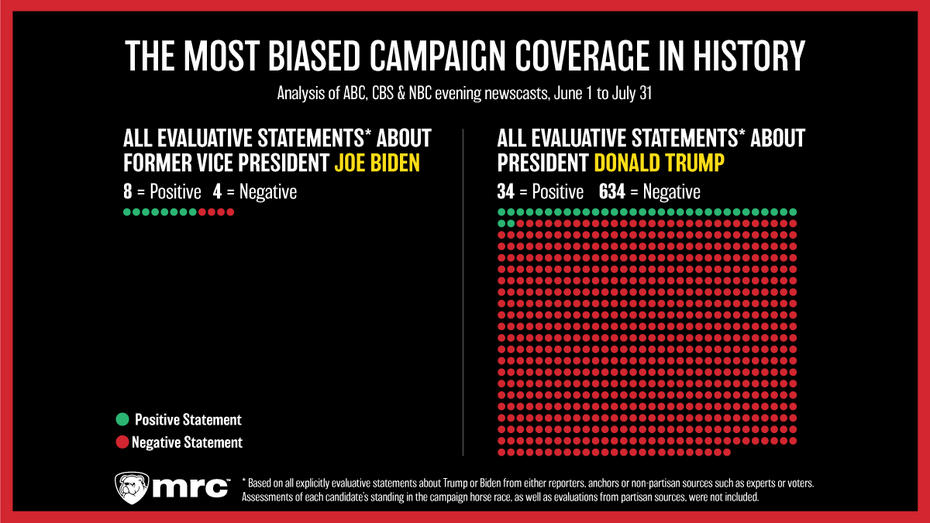 As the pandemic grinds on, the Big Three broadcast evening newscasts are among the highest rated programs on television today — and that means millions of viewers are witnessing the most biased presidential campaign coverage in modern media history.

I’ve been studying the news media and elections for more than 35 years. Trust me — there’s never been anything like it.

A new MRC analysis of all evening news coverage of President Donald Trump and former Vice President Joe Biden in June and July found these networks chose to aim most of their attention and nearly all of their negative coverage on Trump, so Biden escaped any scrutiny of his left-wing policy positions, past job performance or character.

From June 1 through July 31, the ABC, CBS and NBC evening newscasts focused 512 minutes of airtime on the President, or nine times more than the 58 minutes allotted to Biden. (This excludes coverage of the Trump administration in general when not associated with the President himself.) This is an even wider gap than the spring, when Trump received seven times more coverage than Biden (523 minutes vs. 75 minutes).

The extra airtime devoted to Trump consisted almost entirely of anchors and reporters criticizing the President. During these two months, our analysts documented 668 evaluative statements about the President, 95 percent of which (634) were negative, vs. a mere five percent (34) that were positive. Using the same methodology (fully described at the end of this article), we found very few evaluative statements about Joe Biden — just a dozen, two-thirds of which (67%) were positive.

Do the math, and viewers heard 150 TIMES more negative comments about Trump than Biden. That’s not news reporting — that’s a negative advertising campaign in action.

If you consider the evening newscasts a reliable gauge of the liberal media at large (cable news, big newspapers, etc.), it means Biden has enjoyed an army of so-called journalists conducting a massive negative information campaign against his opponent, while he is sheltered from any scrutiny. Controversies from the spring, such as allegations from former staffer Tara Reade that he sexually assaulted her in the 1990s, completely disappeared from his evening news coverage in June and July.

Biden’s various policy proposals — which by his own admission would take his administration farther to the Left than the very liberal Obama administration — received a meager 5 minutes, 22 seconds of airtime, not one second of which included any critical analysis from any journalist.

There were no labels of Biden as “progressive,” “left-wing,” or even “liberal” on any of these newscasts, either; reporters also neglected to tell viewers how much the Democrat would raise taxes if he were elected (spoiler: more than $4 trillion).

Biden’s plan for $700 billion more federal spending (what he called “investments”), announced July 9, received a scant 40 seconds of evening news airtime (25 seconds on ABC, 15 seconds on CBS, nothing on NBC). When he outlined his massively expensive ($2 trillion) plan to combat climate change on July 14, it received six seconds, all of it on CBS.

If the networks weren’t scrutinizing Biden’s policies or his character, what accounted for his 58 minutes of airtime? Conveniently for the candidate, a plurality of it (23.5 minutes, or 40%) consisted of showcasing his near-daily criticisms of Trump. Conversely, only 88 seconds of Trump’s 512 minutes of airtime consisted of relaying his criticisms of Biden (a minuscule 0.25%).

Another 14 percent of Biden’s coverage (roughly eight minutes) consisted of reporters assessing where Biden stood in the race vs. Trump. These so-called “horse race” judgments — assessments of each candidates standing or prospects in the campaign — are not included in our good press/bad press score, but those comments showed a wide tilt as well: We tallied 51 such statements about the Biden campaign, 96% of which (49) were positive; for Trump, 75 of 80 horse race judgments were negative (94%).

No presidential candidate — not even Barack Obama in 2008 — has ever been on the receiving end of such a wide array of media favors. (While Obama received highly positive coverage, there was no massive media effort to destroy his GOP opponent, Senator John McCain.) While the former Vice President sits snugly in his basement before his nomination later this week, the entire liberal “news” media complex have spent the summer on the attack against his opponent, even as they refuse to report anything negative about Biden himself.

Methodology: For this report, MRC analysts reviewed every mention of President Trump and former Vice President Biden from June 1 through July 31, including weekends, on ABC’s World News Tonight, the CBS Evening News and NBC Nightly News. To determine the spin of news coverage, our analysts tallied all explicitly evaluative statements about Trump or Biden from either reporters, anchors or non-partisan sources such as experts or voters. Evaluations from partisan sources, as well as neutral statements, were not included.