Republican Tennessee Sen. Marsha Blackburn critiqued the nonprofit Black Lives Matter national organization in a Monday tweet, saying that BLM is run by “trained Marxists.” She clarified in a later tweet her comment referred to BLM co-founder Patrisse Cullors, who has called herself and her fellow BLM organizers “trained Marxists,” according to the New York Post.

“We cannot allow our great country to be destroyed under the pretense of social justice,” Blackburn tweeted. She did not immediately respond to a request for comment from the Daily Caller News Foundation. (RELATED: ‘I Want The Same Equal Treatment’: Biden Accuser Tara Reade Tears Into Media, Women’s Groups, Democratic Politicians)

Democratic strategist and former National Field Director for the Democratic National Committee Adam Parkhomenko attacked Blackburn for her comments, saying in a tweet: “You are inbred racist trash. Please f— off.”

Parkhomenko was formerly the co-founder and executive director of Ready for Hillary and worked for failed 2016 presidential candidate Hillary Clinton’s campaign as Director of Grassroots Engagement, according to his LinkedIn profile. He did not immediately respond to a request for comment from the DCNF. 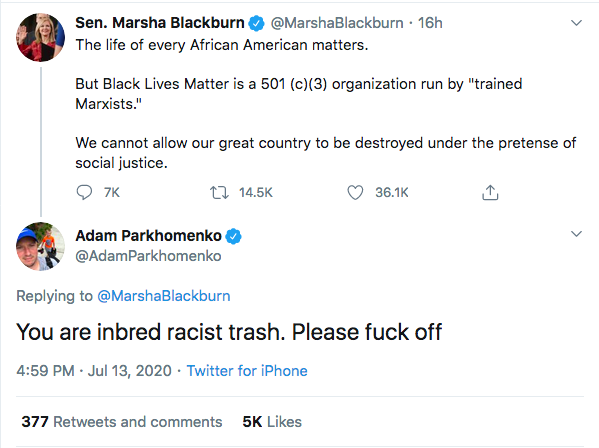 Cullors comments about trained Marxists came when she was promoting 2018 book “When They Call You a Terrorist: A Black Lives Matter Memoir.”

“The first thing, I think, is that we actually do have an ideological frame. Myself and Alicia in particular are trained organizers,” Cullors said in 2018, referring to BLM co-founder Alicia Garza, the New York Post reported.

“We are trained Marxists,” Cullors added. “We are super-versed on, sort of, ideological theories. And I think that what we really tried to do is build a movement that could be utilized by many, many black folk.”