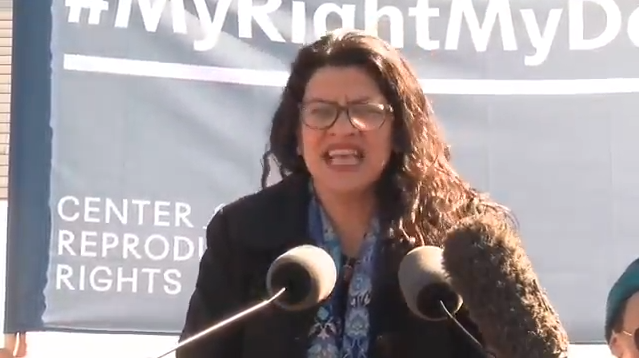 Pro-abortion Democrats are trying to sneak abortions into a police reform bill.

The Federalist reports the new legislation, dubbed the “BREATHE Act,” proposes a kind of “socialist utopia” including in-school abortions, an end to local police departments and reparations for black Americans.

Democrat Congresswomen Rashida Tlaib, of Michigan, and Ayanna Pressley, of Massachusetts, are pushing the legislation. On Tuesday, Tlaib held a virtual press conference announcing the pro-abortion bill; Pressley was unable to attend due to technical problems, according to the report.

“The BREATHE Act is bold. It’s meaningful. It’s transformative. It pushes us to re-imagine power structures and what community investment really looks like,” Tlaib said. “If we listen to our community members and leaders in the streets, we can start to envision through this bill a new vision for public safety. One that protects and affirms black lives.”

The bill boasts of educational, environmental and economic “justice” reforms, which include pushing socialist propaganda and abortions on public school children.

The legislation promises funding for “subsidizing community-owned sustainable energy solutions” and community “climate resilience.” It also requires public schools to radically alter their curriculums with fake history that “examine the political, economic, and social impacts of colonialism, genocide against indigenous people, and slavery,” while forcing the nation’s educational institutions to “provide free, high-quality health services at schools and/or at nearby student- and family-focused centers, which services to include reproductive autonomy.”

In other words, the far-left wants to mandate schools offer abortion in the name of social justice, while abortion is one of the largest killers of black Americans today.

Tlaib and Pressley did not explain how they plan to pay for their so-called “reforms,” the Federalist noted.

Some public schools already partner with the abortion chain Planned Parenthood to provide sex education. Some even allow it to put its “clinics” inside their high schools.

Last year, California passed a law mandating that all public colleges and universities provide abortions on campus for free to students, despite strong public opposition. Now, other states are considering similar legislation. It was only a matter of time before pro-abortion Democrats began proposing abortion mandates in high schools, too.

Abortions do nothing to protect black lives, though that is the stated purpose of Tlaib’s and Pressley’s bill. On the contrary, abortions have destroyed approximately 20 million unborn black babies in the past four decades in America.

Tens of thousands of doctors confirm that abortions are not good or necessary health care. Abortions kill unique, living human beings inside their mothers’ wombs, and they can pose serious risks to the mother’s life, too.